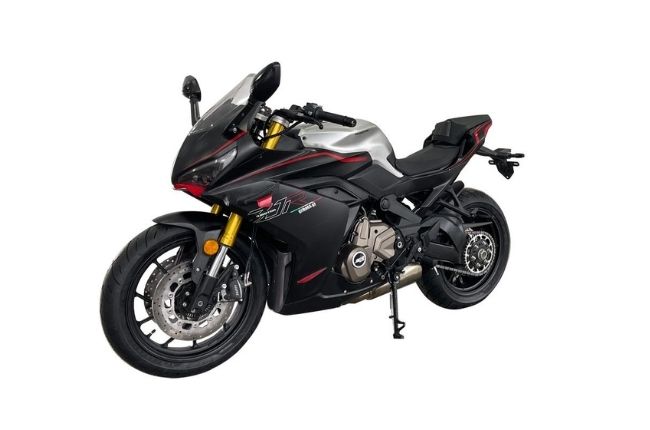 QJ Motor is a brand that's been gaining traction in the motorcycling industry for quite some time now. Its parent company, Qianjiang, is known primarily for its ownership of Benelli and its partnership with MV Agusta and Harley-Davidson. Two years since its launch, the Chinese brand is itching to widen its reach globally.

Now approval filings in China have emerged, detailing the design and specs for two new QJ Motor parallel-twin sportbikes. According to a report from Cycle World, the 693cc models appear to be carrying either a clone or license-approved version of the parallel-twin power plant found on the CFMOTO 700 CL-X Sport and 700 CL-X Heritage.

QJ Motor's engine design reportedly shares many similarities with CFMOTO's, down to the mill's 83mm bore and 64mm stroke. If proven true, QJ Motor's new sportbikes could provide respectable performance. Apart from the engine, the new models feature a steel tube frame and what looks like a Marzocchi suspension system. The red model, thought to be the lower-spec version, rides on a black fork and double-sided swingarm. The black version appears to be the premium model, packing a gold-finished fork, a stylish single-sided swingarm, and a wider rear tire. Curiously, QJ Motor went with Nissin brake calipers instead of the Brembo brakes present on some of its other offerings.

QJ Motor could be gearing up to launch these new sportbikes soon, as its filing of regulatory approvals signals the tail end of the models' development cycle. On top of these new models, which could carry the 700RR name, we’re also waiting on the 600RR, a four-cylinder sportbike that could be formidable in its own right. QJ Motor is also working on a 400cc sportbike that rumors indicate could become a budget MV Agusta model.

We haven't heard any news on that bike since late last year, but that could change soon, as the company appears to be ramping up production for several new models. While QJ Motor has yet to find itself in the Philippines, its sister brand Benelli takes care of things on this side of the world.