Last September 4, 2020, Yamaha Philippines officially launched one of its most anticipated scooters from its lineup, the Nmax 155. After a leaked memo initially meant for the brand’s dealerships nationwide started circulating online, the motorcycle brand has finally made it official. Yamaha has officially released the specifications and updated features for team blue’s best selling scooter. Its official price starts at P119,900. 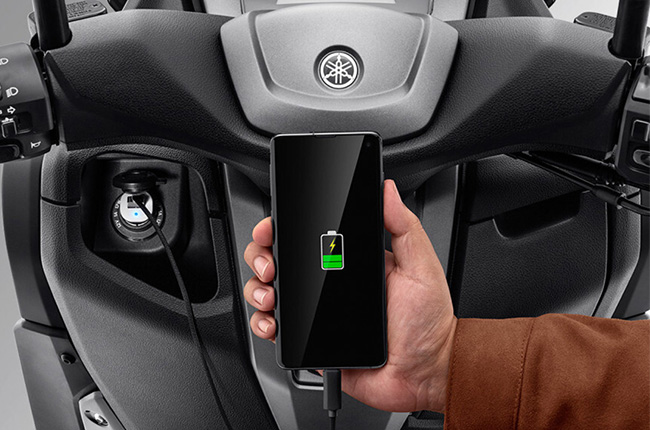 The new Nmax 155 comes with an improved 155 cc Blue Core, 4-stroke water-cooled single-cylinder engine with Variable Valve Actuation (VVT). Thanks to this feature it produces 15 hp at 8,000 RPM and 13.9 Nm of torque at 6,500 RPM. With that said, the updated engine now delivers better acceleration and improved emissions. It now has a redesigned rectangular fully-digital panel screen that displays fuel, temperature, a digital speedometer with two trip computers, and average fuel consumption. The multi-function panel now also tells you when the VVA is engaged and can be toggled with its handlebar-mounted switch. The Nmax 155 now sports some new LED headlights and tail lights with a hazard lamp switch. Its front panel now has a covered right compartment and an open left compartment that now comes with a power socket to charge all your favorite devices. It also features a new keyless system that allows you to keep the keys in your pocket. The new feature works by simply twisting the ignition knob to start the scooter; it also functions as a way to open its compartments. Aside from this the new scooter also has remote switches to access the fuel and under-seat compartments. Its new Start-Stop system now allows the engine to automatically turn off when idling or at a stop for better fuel efficiency, which can also be disabled by the driver if they prefer not to use it. However, while we have previously predicted an update to its rear suspension, the new Nmax 155 doesn’t get the improved rear shocks with sub tanks, similar to the version released in other Southeast Asian countries. It does, however, still get the same simple twin shock set up as the previous generation, perhaps to keep its price within an affordable range.