Aprilia has always had a slight presence in the Philippines, silently lurking in the shadows, waiting for the opportunity to surprise with a motorcycle or two. Those outside of the usual motorcycle circles will have some trouble with its brand recall, as Italy’s household name, Ducati, always sticks. Could it be marketing? It can’t be bad products, because Aprilia has been producing fantastic machines that have won over 50 world championships in the past 70 plus years.

A subsidiary of the Piaggio group, Aprilia was a blip on the radar for the local motorcycle community, with a few distributors taking on stocks, selling to the lucky few who were either aware of the brand, or wanting to try something else.

Since a few years ago, Aprilia has all but disappeared from our market, with secondhand or older stock motorcycles still roaming the streets or looking for new homes. I was lucky enough to have the opportunity from Bikerbox, official service center for Aprilia, to ride an Aprilia Tuono V4 with all the extra goodies from the factory. Brutally fast, light on its feet, and featuring an almost orchestral-like engine soundtrack, the Aprilia Tuono V4 is a seriously good contender for one of the best super-naked motorcycles to hit our local shores. While it may be five years old by the time of this writing, the Tuono still boasts some fancy technology that has aged very well, and still makes it a viable option for those wanting to tame one of Italy’s finest.

Devoid of any full fairings, save for the headlight assembly, an aftermarket windshield, and side covers, the Tuono V4 takes cues from its Aprilia sibling, the RSV4 superbike, the same bike that has won many superbike comparos for a few years.

They also happen to share the same 999.6cc 65 degree V4 engine, although reworked for the Tuono to provide more middle and low range power. Essentially, the Tuono V4 is a more comfortable and livable version of the RSV4 superbike. I don’t see the problem living with either, but I’d take the cushier seat of the Tuono V4 for daily commutes any day. Aprilia Performance Ride Control, or APRC, is Aprilia’s suite of electronic assists to keep you in check and both wheels on the ground. It consists of adjustable traction control, which is adjusted via plus and minus paddles on the left hand, wheelie control (which you’ll be needing), launch control, and a quickshifter for clutches upshifts.

For a bike made in 2013, the electronic package is still comprehensive, and rivals the bikes from other manufacturers. It is interesting to note, however, that the three available riding modes are only switchable a few seconds after starting the bike. S, or sport, is for spirited/aggressive riding, with smooth torque and full power delivery. T, or track is for full-on, untamed 160 plus horsepower. Lastly, there’s R, or road, or in my own words, restricted, that dampens 25% of the power and smoothens out a lot of the torque throughout the gears for city or wet roads. 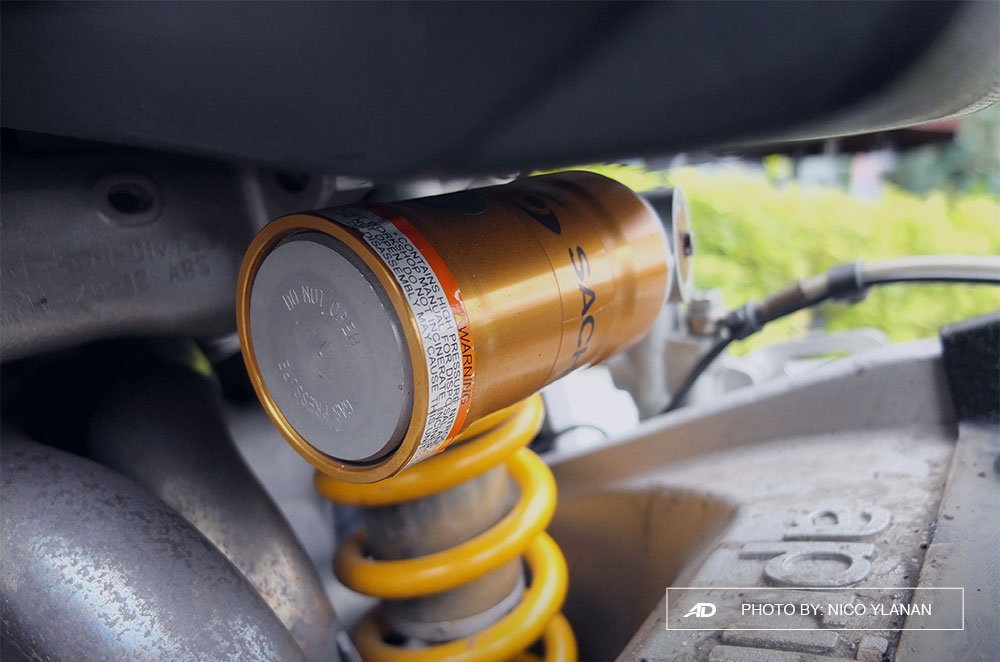 Power comes from a V4 engine, which delivers 167.3 hp, and is mounted on completely revised chassis architecture. The first three gear ratios are now shorter, while the maximum torque value of 111.5 Nm is on tap at 9,500 rpm, two characteristics that give the Tuono V4 R solid power at low and mid-engine speeds.

First few gears pull like a freight train, and, are completely capable of bringing up the front wheel without the wheelie control. Shift from first to second at 12,000rpm, and you’ll notice triple digit speeds right off the bat. Crazy, but in a good way. The quickshifter is good, but I did notice some learning curve when it came to the proper engine speeds needed to get a smooth upshift. At full song, the noise from the V4 is intoxicating, with enough low end rumble and induction sound to impress anyone with even a slight interest in automobiles and motorcycles.

The Tuono weighs in at 183 kg dry, and is a bit heavy for its class, but the weight feels more balanced once you get it off the sidestand. It has absolutely no issues tackling corners at speed and will naturally fall into your desired line predictably. The frame and swingarm are made of aluminum for weight savings, and flexional and torsional stiffness, which, in no small part, helps the Tuono feel like a lighter motorcycle when ridden. Wide bars are also welcome, giving leverage and comfort on those looking to commute or take longer rides. The bike feels stable and solid throughout most corners, although, the suspension is on the stiffer side, which can lead to some soreness in the wrists after a few hours ride. A few changes on the fully adjustable Sachs rear and 43mm front suspension should iron out any niggles, but the components are top shelf stuff.

As a daily motorcycle, the Tuono V4 R is fully capable of taking you from your suburban home, into the city, and back again, regardless of the traffic condition. Splitting and filtering is a breeze thanks to the power on tap, making quick work of any gaps or opportunities in traffic. The seat is nice, but angled forward, for a more aggressive riding position; perfectly suited for a bike of this nature. The instrumentation is easy to read and is comprehensive; gear indicator, trip meters, settings for traction control and other goodies, and a nicely done analog and digital combination tachometer and speedometer. Seat height is a bit tall at 32.87 inches, so keep that in mind when coming to stops or weird road angles.

Aggressive styling and an award winning engine combined with top notch electronics have made this Tuono V4 R age gracefully. Serious performance can be expected at the twist of the throttle, as is razor sharp handling, almost telepathically dicing corners in the right hands. The Tuono V4 R is a perfect example of “You don’t know what you’ve got ‘till it’s gone”.

No word on when the next batch of Aprilias will arrive in the country (no distributorship anymore), but rest assured that if you decide to pick a second hand one up then you’ll be treated to one of Italy’s finest steeds. Oh, and that soundtrack.

Contact Dealer
Price On Request
Get the Best Deal