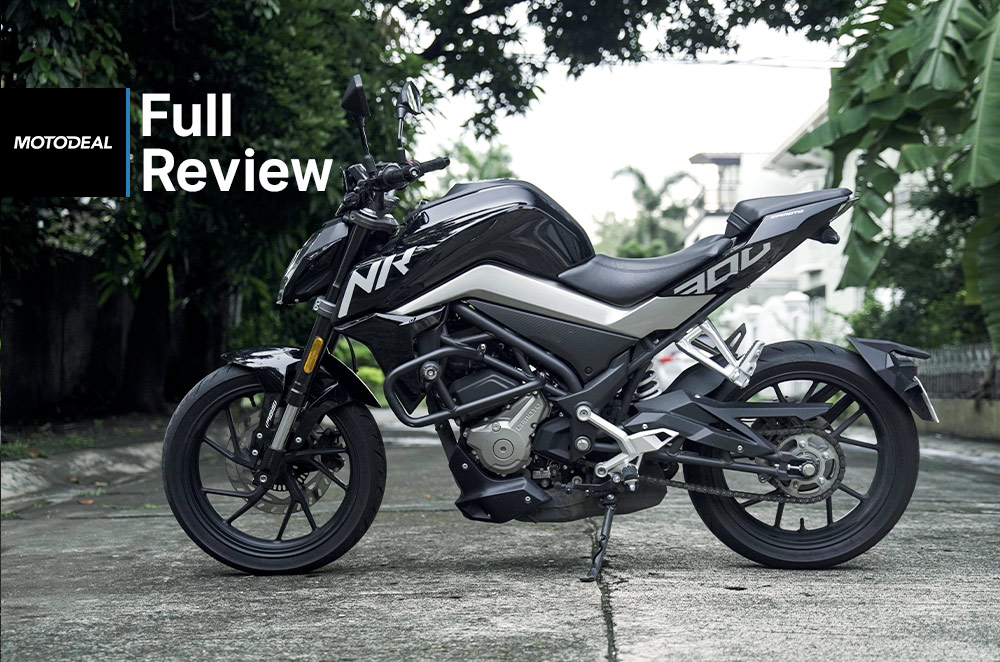 Everyone knows how the CFMOTO 400 NK looks like. It’s a sharp and edgy motorcycle that’s highway legal and priced well. Though, what if we took away one cylinder and only stock it up with 292ccs worth of displacement?

Is the CFMOTO 300 NK a great bike even without the extra cylinder and the highway legality? Weirdly enough, it’s better in some areas compared to the 400, and here’s why. 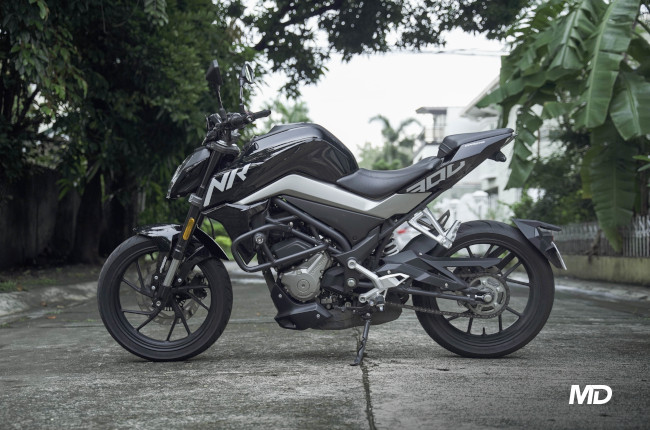 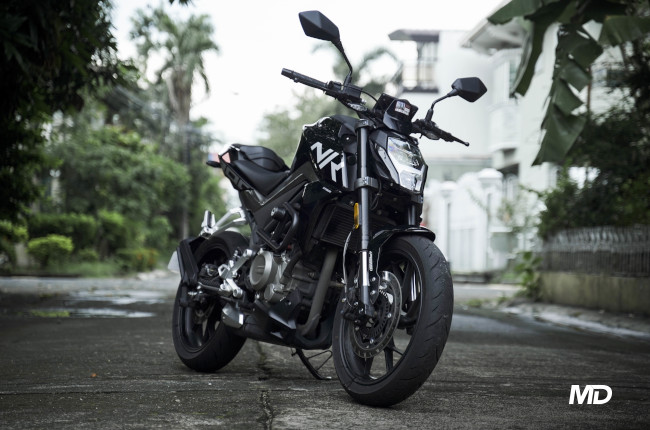 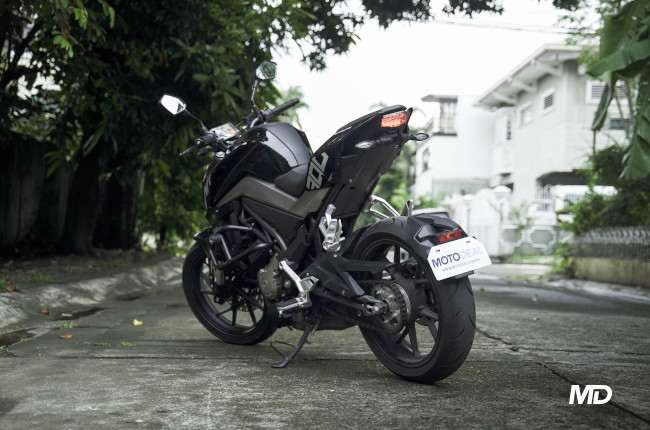 The CFMOTO 300 NK was actually updated before the 400 NK. The highway-legal unit actually has the same headlight unit that the 300 NK currently has which is LED. On top of that, you also get a small flyscreen on the top of the headlight which doesn’t really do much, but it does well for stickers, but not much for an RFID tag. Not like you’ll need it anyway. The rear, however, is just like the 300 SR, you get a tail that is designed nicely, but doesn't feel so solid since it is constructed out of plastic. Still, it is visually interesting. 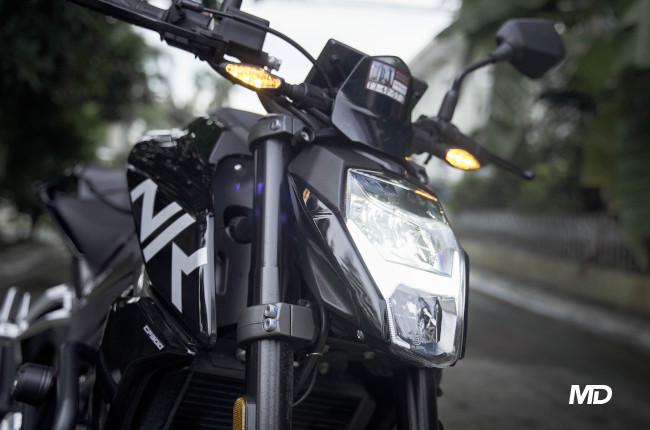 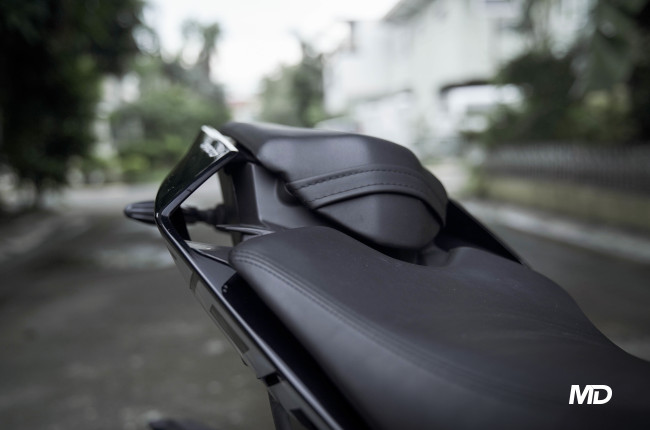 Apart from that, the bike’s overall design is as expected from CFMOTO. Edgy bodywork dominates the bike but its plastic construction is a little underwhelming. Given the price point of this motorcycle, we’re not complaining, as it feels more solid than the creaky 300 SR. 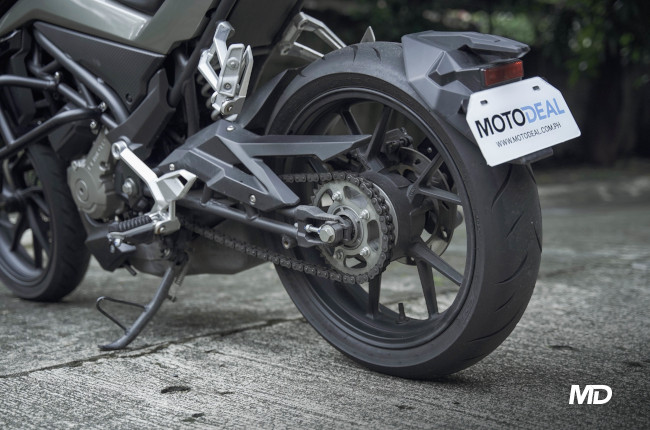 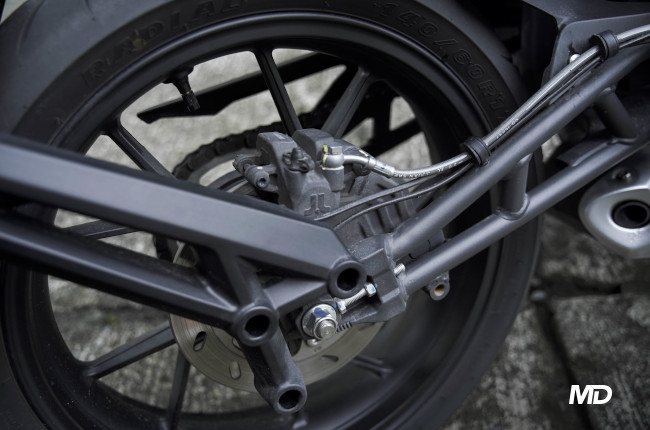 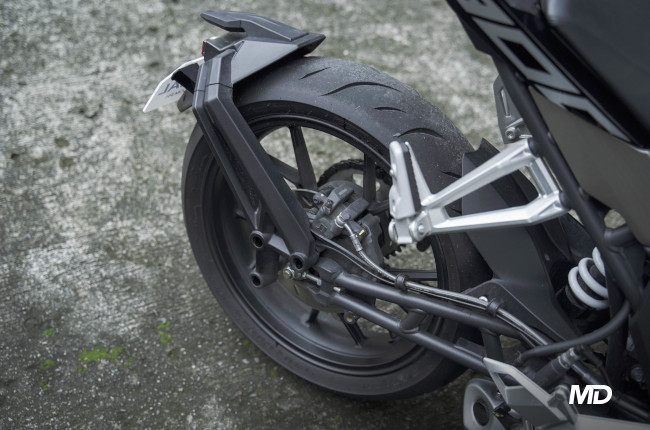 Though, we will mark off a few points given that its swingarm looks a little dinky in comparison to the rest of the bike. It’s not a single piece like other swingarms of bikes in this category, but it did get the job done during our time with the unit. Still, it’s welded steel which is likely lighter than other swingarms in the segment. We also assume that it was an exercise to create a cost-effective solution on an otherwise expensive part. 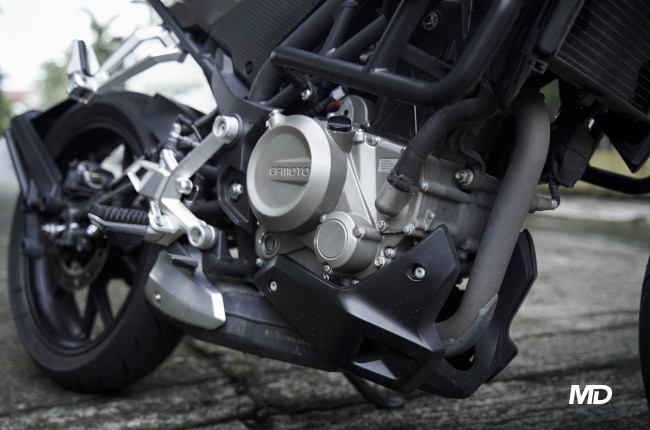 If you comb a lot of spec sheets, you will find that the 300 NK shares the same engine as the 300 SR and the same horsepower as the 250 NK. You might think that going for the 300cc option is a waste of money, but there is extra grunt at the middle of the bike’s powerband. With 27.5 horsepower, the bike won’t make enough ponies for you to soil yourself, which is inherently a good thing. On top of that, you get a rather friendly clutch pull along with a very agreeable transmission which will allow the bike to crawl along in second gear if you get stuck in slow-moving traffic. Though, we will say that the throttle responded a little sluggishly compared to some other bikes we’ve tested. This could be due to the cable being a little loose on the particular unit we had at the time, but that’s nothing a good tune-up won’t fix. 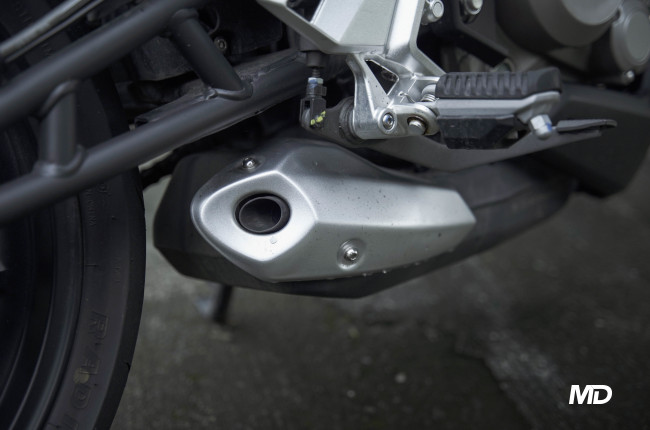 On to that transmission, the gear changes were crisp moving up and down the ratios, but the bike lost out on a lot of top speed due to the lack of horsepower, and perhaps a rather short ratio for its final drive gear. Other gripes include its rather hollow exhaust note thanks to a relatively short underbelly muffler, but it is otherwise good-sounding at higher RPMs. 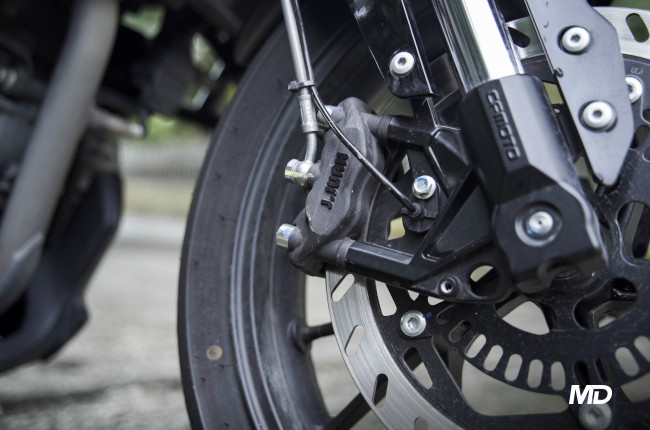 On the handling side of things, the 300 NK is equipped with J.Juan brakes that are very capable. The front-wheel houses a 292mm rotor, which nets some good leverage, while the rear is equipped with a 220mm rear disc with ABS as standard on both wheels. We’d like to point out that the brakes are probably one of this bike’s stronger qualities. The suspension is geared towards overall performance, so it’s not going to be luxuriously comfortable, but rather it’s passable on some of the bumpiest portions of EDSA. In terms of performance, the bike corners well enough even on the OEM-provided tires. Both rims measure 17-inches in diameter, while the front wears 110-width rubber and the rear is wrapped in 140-widths, which may not amaze on the already small-looking bike, but it will get the job done given the power. 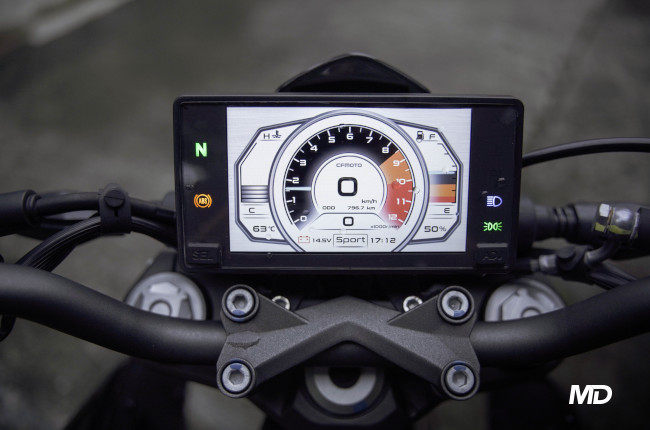 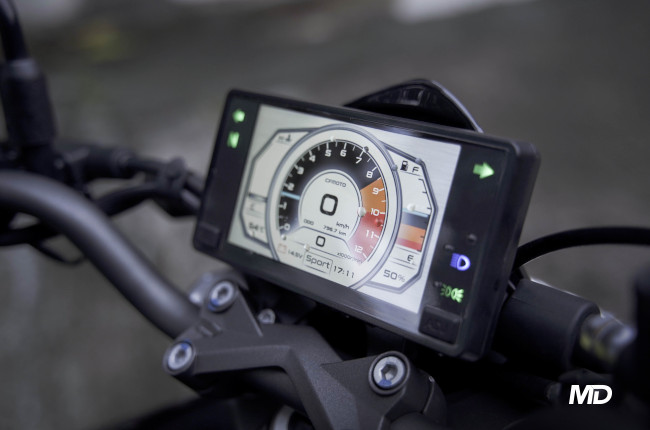 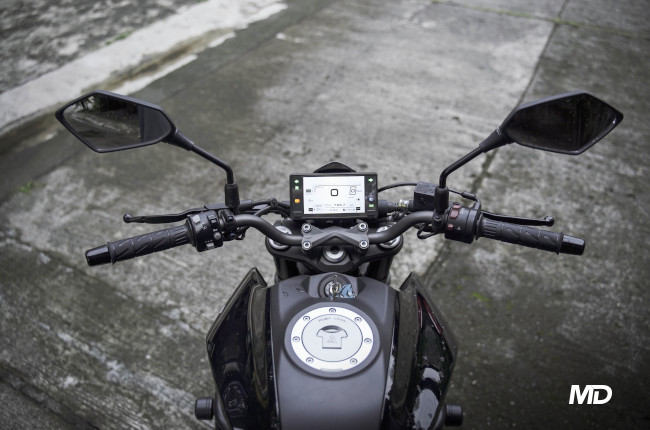 CFMOTO is doing something rather peculiar with its smaller range of motorcycles. Instead of giving its best-seller, the 400 NK, a TFT gauge, the 300 NK gets it. The cluster isn’t as fully-featured as other TFTs on more expensive motorcycles, but it does house a nice screen that will shine brightly even in the daytime. The issue with this screen is that it doesn’t display fuel economy, nor does it have an ambient light sensor, though we do think that the price would have been driven up quite a bit. We only wish that we could choose what type of display we could see when we do switch between the Sport and Rain riding modes. 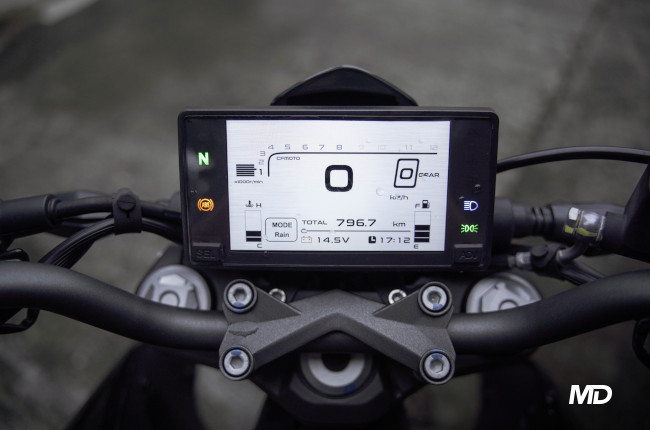 Speaking of switches, we’d say that the switchgear found on the 300 NK is perhaps yet another high point for the model. The action is responsive and clicky, but the horn placement is a little inconvenient as it forces you to reach all the way to the right then locate and hit a small round button. 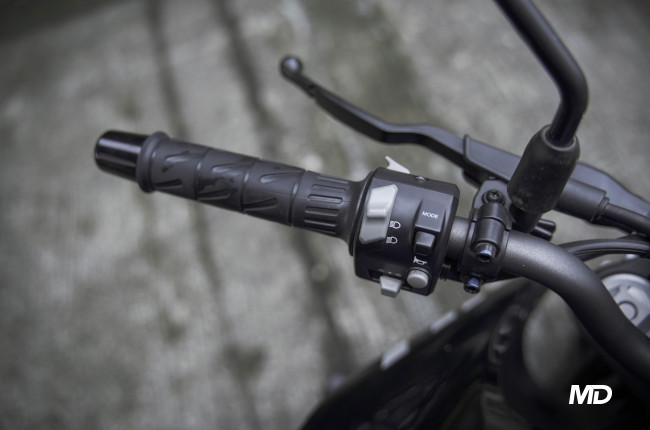 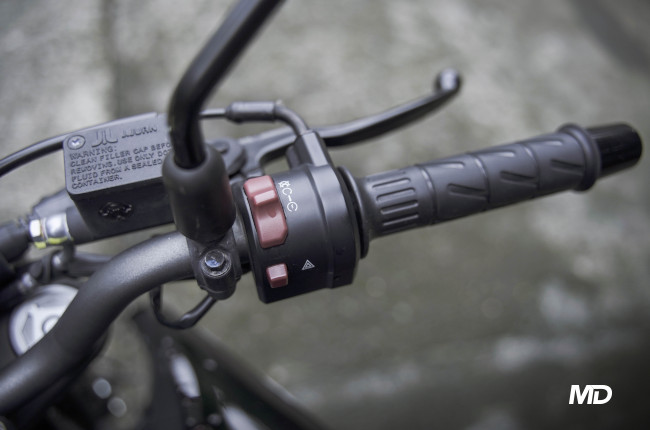 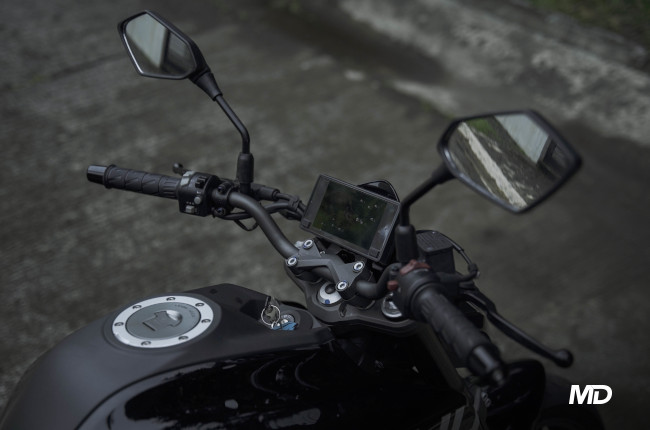 As for safety equipment, you do get a rain mode which dials back the throttle response, and you also get ABS to keep your bike from skidding under heavy braking. Overall, the bike’s tech and safety packages are pretty standard for its class but great for its price point which we will get to in a bit. 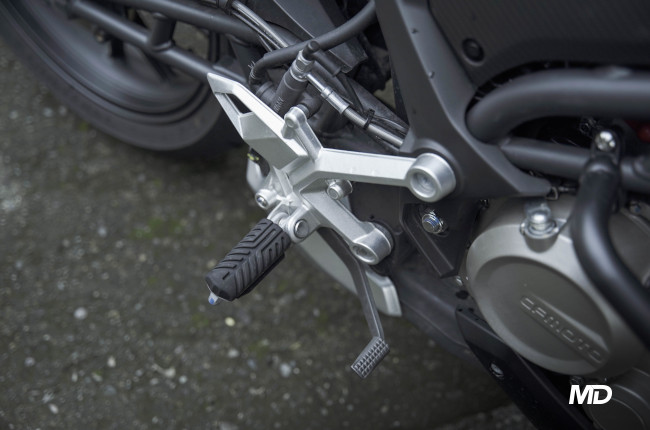 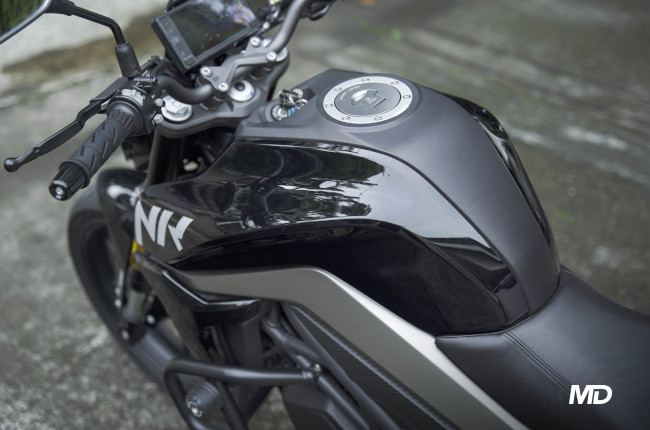 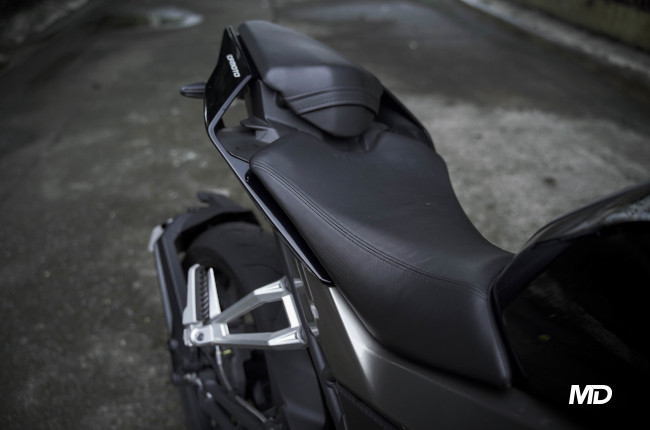 As stated, comfort over some of the bumpiest parts of EDSA was passably good. The bike does well to soak up bumps, but just like the 300 SR, the seating material may feel stiff on longer rides. There is a small space under the pillion seat for some storage, but the seat here isn’t optimal for a back-rider unless the trip will be a bit short. This is expected since the bike isn’t a tourer, however, the bars are long enough for riders to use without tiring easily and it allows for good amounts of leverage. Nicer still is the weight of the bike at just 151 kg with a rather thin inseam and a set height of 795mm, making it ridiculously beginner-friendly.

The bike is extremely easy to get a grasp of for more experienced riders, and it’s not going to be a rocky start for beginners. You get the added benefit of rain mode to smooth out potentially jerky throttle inputs, and you also get ABS to catch you should you panic a little too much while braking.

Overall, it’s a pretty usable bike if you like to ride normally, or a little spiritedly. In short bursts, the bike can produce a modicum of excitement, but on longer journeys, you may want to look for something else. This motorcycle also excels in the city, however, it should be noted that it is no scooter so bring your own luggage, tie-downs, or top box if you’re looking for storage space. Oh, and the fuel economy is relatively good at 28 km/L to about 30 km/L, which can rival 200cc or other 300cc bikes. 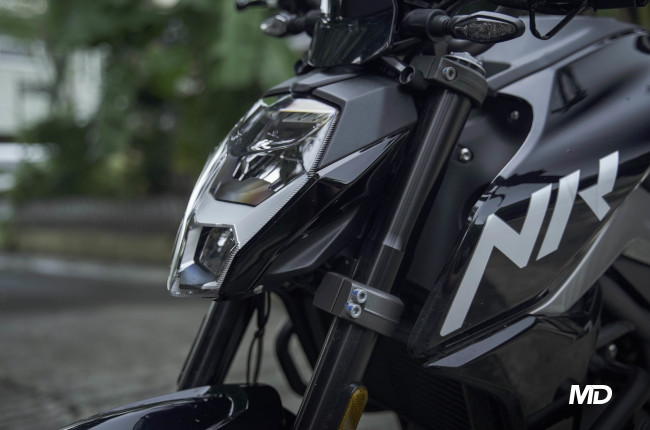 So where does the 300 NK sit? It’s about as light as a 150cc to 200cc motorcycle in the sport naked segment. It’s also decently equipped with a TFT gauge cluster, LED lights all around, and it also has very approachable dimensions for any rider to have a good time on and use throughout the day.

Now, it seems like the complete opposite to the 400 NK with one less cylinder, less weight, and no highway legality, however, less is more in this case if you’re looking for a bike that you can take in the city. It is important to remember that the 400 NK is a heavy bike in comparison to this one.

It seems perfect for beginners who want a little more power than the standard 150cc offerings in the market, but have a budget that they have to work around with. Not only does the CFMOTO 300 NK fit the bill priced at P158,000, but it also makes for a great step up if you already have a 150cc motorcycle or scooter and don’t need to access the highway all too often. It’s plenty usable in the city and fuel-efficient enough for you not to feel the pinch whenever you gas up. 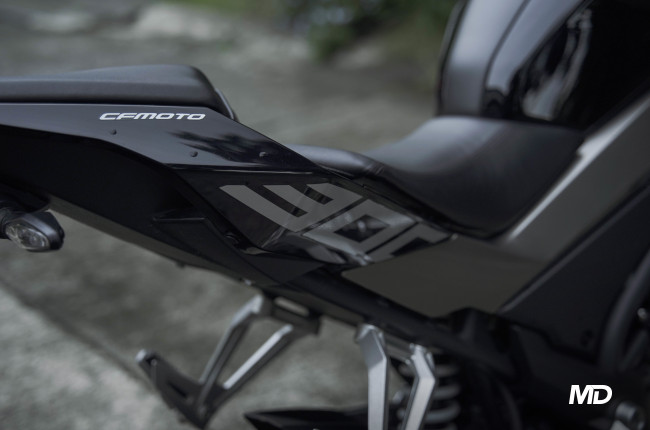 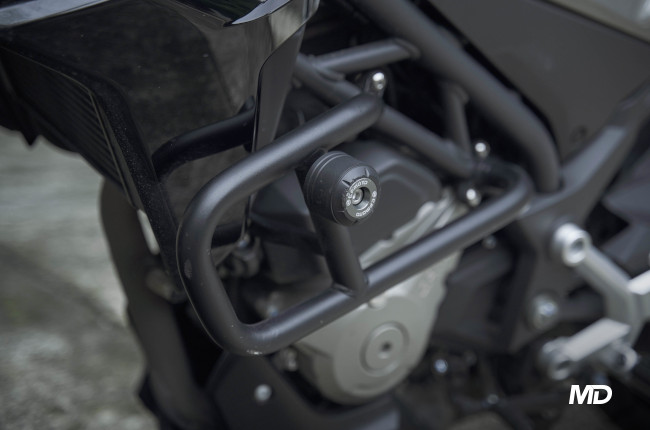 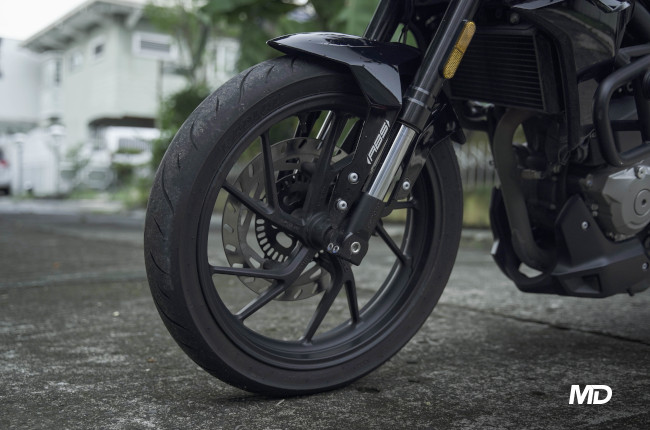