I’ve always been a longtime fan of Ducatis ever since I started motorcycling about eight years ago. A part of me always loved the design of the bikes that rolled off the production lines in Bologna, Italy. There was always an appeal that a Ducati had, almost like seeing an Italian exotic supercar, except this was more free and more raw. The combination of sleek styling and a unique engine created a brand that just exuded exclusivity and an appreciation for the entire Ducatisti lifestyle. With a brand with so much racing heritage and history, it’s hard not to notice how certain models have stood the test of time, appealing to riders and, arguably, creating a market for a naked motorcycle that would stand for more than two decades.

That’s right, the Ducati Monster celebrates 25 years in 2018. Ever since it was shown at the Cologne Motor Show in 1992, it embraced simplicity - a saddle, tank, engine, two wheels, and handlebars. And those are the exact words of Monster designer Miguel Galluzzi himself. The original Monster was the M900, and was almost a mishmash of different parts from different bikes. It had the steel trellis frame from the 851 superbike, an air-cooled 904cc L-twin from the Supersport Desmodue, a new gas tank, low handlebars, and a round headlight. The Monster would come to define what a naked bike should look like: muscular, fast, and eye-catching. Of course, that was many years ago, and motorcycles have jumped ahead in terms of technology, power, and rideability. It’s 2018, and I was just handed the keys to a Ducati Monster 821 for a few days. Being a Ducati Monster owner myself, in the form of a 2001 916cc Monster S4, how could I say no? The 2018 Ducati Monster 821 slots itself in the middle of the naked motorcycle lineup for Ducati. Think of it as the middle ground between the awesome Monster 1200 and the entry-level Monster 797. But in reality, it plays a much bigger role since it carries over some marked improvements since its introduction in 2015. Slightly redesigned this year, it received the same bodywork as the 2017 Monster 1200, featuring a new headlight, a slimmer tank more reminiscent of the original M900, and a redesigned tail section. You’ve also got a new TFT full-color display and the updated Ducati Safety Pack suite, offering Bosch ABS, eight level traction control, and riding modes. The engine is still the same 821cc from three years ago, with the added bonus of Euro 4 compliant emissions. Oh, and most probably the most important part, the Monster 821 is now available in yellow, the classic color makes its return after such a long time. So, does the philosophy of the original Monster still ring true with the 821? Let’s find out. What does it bring to the table?

While this is a refresh for 2018, the Monster 821’s beating heart is still that awesome 821cc 90-degree L-twin that generates 109 hp and 85 Nm of torque. Torque is wide and usable, thanks to a very accessible powerband all the way to redline. New to the 821 Monster are the addition of three riding modes that can be changed by a few presses of a button. 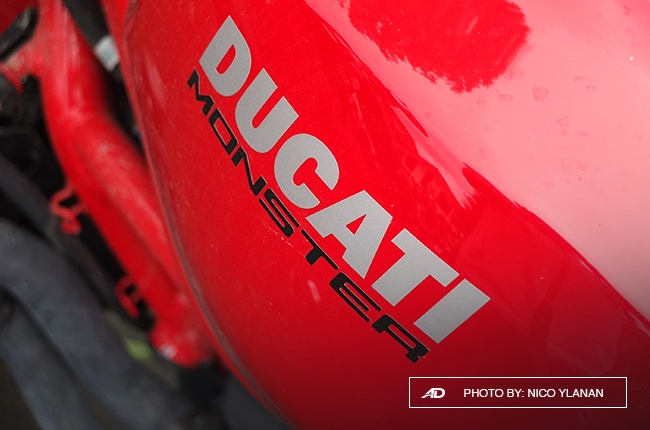 Street, sport, and wet adjust the assists and level of intervention automatically (you can then tweak them individually later on, though), and it’s great to see more accessible bikes getting some loving these days. New riders will definitely appreciate some additional peace of mind, aside from the ABS. The new TFT screen is fantastic to look at, and adjusts itself well to lighting conditions. More information is presented, and easily accessible thanks to a few left hand button combinations.

The 2018 Ducati Monster 821 tips the scales at 206 kg, but the slim tank and frame help create a sense of agility. A new double barrel exhaust helps keep emissions in check and helps resonate the bark of the charismatic L-twin, and it’s a lovely sound. How does it ride?

You know, coming from an old-school dry clutch Ducati, it’s easy to be spoiled by all the technology and assists that come with modern bikes these days. All of the big motorcycles I’ve ever owned never had ABS or any fancy technology. My traction control was my right hand, and my braking power was based on my foresight and modulation of the levers. The 2018 Monster 821 has that vibe that just hits the sweet spot for me in terms of power and control. Let me explain further. In the three days I had the Monster, it was raining about 50% of the time, and I tried to use it as much as I could. I clocked in around 200-300 kilometers with it, and the weather wasn’t really an issue. When you’re straddling the 821 Monster, there’s a familiar seating position that you’ll find in many naked motorcycles. It’s comfortable and natural enough, but the Monster makes it a tad bit more aggressive by lowering the bars ever so slightly. It makes the ride feel more involving, really. Fire the bike up and the fun starts to begin.

Despite the Euro 4 restrictions, fueling was good on the 2018 821 Monster, as there was minimal jerkiness or chugging along around town in low speed. I had to switch to street mode to help address the slightly sensitive throttle, but it just took some getting used to. The sweet spot for most Monsters that are below 1200cc is usually between that 5000-9000 RPM range, and the engine is such a revvy thing that you’ll be hustling along in no time. The gear shifting is smooth enough, but I did get a false neutral here and there, attributed maybe to me not positively pushing or pulling the lever in place for the next gear. Finding neutral at a stop isn’t a puzzle anymore, as was my experience with other Ducatis. The engine is a sweet motor, providing low-end thrills and manageable power that won’t surprise newcomers and will still offer plenty of breathing room for seasoned riders. If it ain’t broke, don’t fix it, and that’s exactly why Ducati decided to leave the 821cc engine alone. Good choice, really. 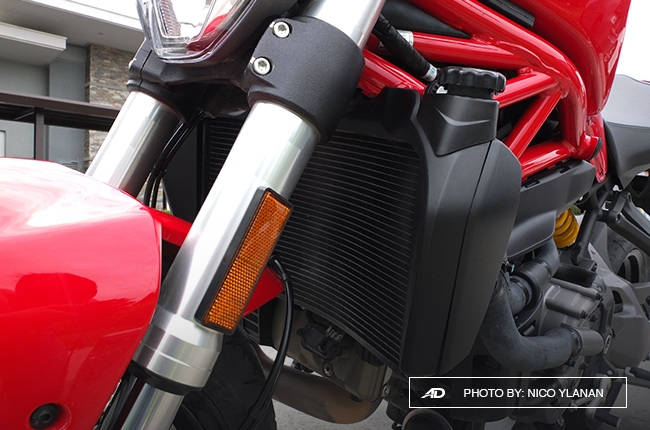 Brakes are a set of Brembo M4 calipers that offer nice feel, but can lack initial bite. They don’t fade and still offer top performance even after a day of riding, so it’s just me nitpicking at this point. They are more than adequate for any riding situation. Hats off to the stock set of Pirelli Diablo Rosso III tires as they felt extremely planted and felt great on various road surfaces in the wet and dry and are truly confidence inspiring. What I wasn’t too keen on was the non-adjustable front fork and the rebound and preload adjustable rear shock combination for my weight. It felt a little too jarring at stock setting, and this could of course be dialed in if it were my bike. It wasn’t twitchy or unsettling in any way, (I rode a 954 Fireblade before, now that’s twitchy) it just felt like the bike didn’t translate road imperfections as well as I expected. Either way, adjustments to the rear and maybe a swap to aftermarket components up front will open up a new world of riding comfort.

On technical sections of road, the perceived lightness of the Monster 821 shines as your knees easily find a comfortable spot on the sides of the steel tank. This bike loves to lean a lot, and the tires transmit a good amount of feel together with the suspension on the right road conditions. Let the bike settle into corners, and you’ll find that the 821 Monster has some fight in him when compared to sportier bikes. I even found myself bouncing off the rev limiter coming out of corners, forgetting that there’s so much torque to use that I can afford to stay in a higher gear. It’s an overall fun weekend bike that will give you many kilometers of enjoyment in the canyons.

Around town, the engine performs fine and the ergonomics are sound. The problem lies in two things. One is the heat generated by the exhaust and engine that seems to be aimed directly at my thighs. Granted, Italian bikes do warm up considerably, but there were times when it was uncomfortably hot. I found myself turning the bike off in gridlock when there was no way to keep moving. Second is the ever-present short steering lock of Monsters, making tight turns in between vehicles a tricky affair. If you expect it or are used to it, then you shouldn't have a problem. It’s when you forget that you only have ever so much turning radius with those handlebars that things can get a little surprising. Other than those two gripes, the Monster 821 will happily commute with you on a daily basis. It’ll make gaps with its generous amounts of torque, and you’ll pull away from traffic with ease. You can even split with confidence since the the motorcycle is fairly slim. 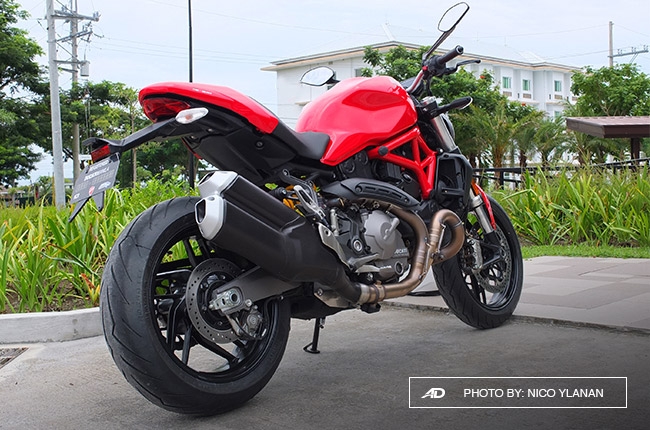 Whereas the original Monster was raw, with an air-cooled engine, a rattling dry clutch and few concessions to comfort or convenience, the Monster has become more refined over the years. The Monster is Ducati’s longest-running model, witnessing the company’s ups and downs, and resulting in over 300,000 Monsters being sold since 1993. It has always carried the torch for what a naked sportbike should look, feel, and perform. The latest iteration is no different, still staying true to the values that every Monster has tried to pass down to the next generation. It’s by no means perfect. It has its quirks, but the 821 Monster is now more approachable and accessible than ever, catering to a vast majority of riders who want something that isn’t as visceral as the Monster 1200, but still possesses the pedigree of performance and style that has drawn aspirational motorcyclists the world over.