Frequent readers of MotoDeal.com.ph are well acquainted with CFMoto, and the incredible value-for-money motorcycles that they offer especially in the Philippine market. In fact, the CFMoto 400 NK has been quite a popular entry level big bike ever since its launch in 2017, so much so that for a time, it was indeed the most popular motorcycle on our website. Apart from the 400 NK, CFMoto has an array of machines suited to all sorts of riders across multiple backgrounds.

For beginner riders, they have the 150 NK and 300 NK—sharply styled naked bikes which look and perform the part. For those whose skill levels and budget go beyond the capabilities of the 400 NK, there’s the 650 NK, a powerful middleweight brawler that boasts an impressive 65 hp and an intoxicating mid to top end power delivery. For those who seek to go the distance, there’s the 400 and 650 GT, a premium sport tourer decked out with creature comforts. Lastly, for those whose urge for adventure takes them off the beaten path, there’s the 650 MT, a capable adventure tourer with an impressive 71 hp. Late last year, CFMoto introduced the 700 CL-X, a retro styled scrambler that exudes style by way of premium features and impressive performance. This launch was soon followed by the updated 400 NK which boasts an LED headlight, and restyled body work. 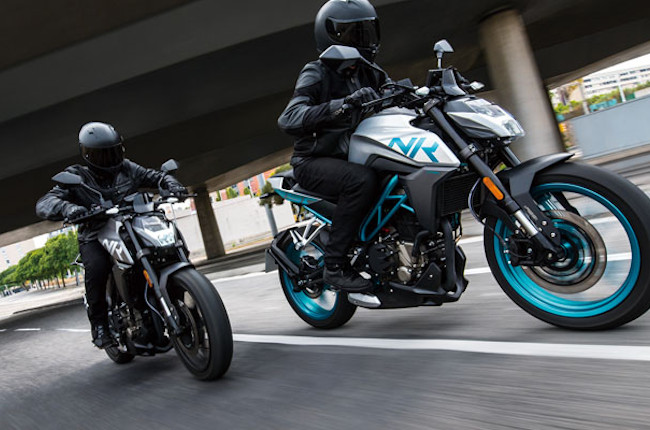 Now, the latest news from the Chinese manufacturer suggests that they’ve been giving attention to the smaller bikes in their range. With the recent launch of the 300SR being a success, it would appear that CFMoto is giving the platform on which it is based, the 300 NK, an update. For starters, we can expect the upcoming 300 NK to feature a host of design and styling updates. With KTM’s designers, KISKA Design still very much onboard with CFMoto, we can expect the new 300 NK to be even sharper and sleeker than before.

As far as performance is concerned, the new bike is expected to feature similar braking and suspension components as the outgoing model. Additionally, reports suggest that the new bike will also come with a slight bump in power—27.5 hp, as opposed to the outgoing bike’s 26 hp. At the moment, the official release of the new bike has yet to be announced. However, the current generation CFMoto 300 NK, is no slouch either. It employs gorgeous aesthetics and performance that puts it at the level of some of the most premium bikes of its class. This amazing package costs just P158,000.