Honda has been on roll for the last couple of weeks on its patent applications. This particular patent, however, could be the most relevant and with the most potential for actual use. Motorcycle manufacturers have been competing with each other for aerodynamic designs to improve the performance of their motorcycles. Honda has filed a patent for a new tail unit that's designed to improve handling and straight-line performance, especially during high speeds.

The recent trend has been the presence of winglets to increase downforce and reduce drag, as seen in the new Honda CBR1000RR-R Fireblade or the Ducati Panigale V4. A frontal fairing together with its winglets works well for slicing through the air. However, the rear end would cause a significant amount of wake, often called dirty air. Honda’s focus now shifts to a different part of the motorcycle, its tail. 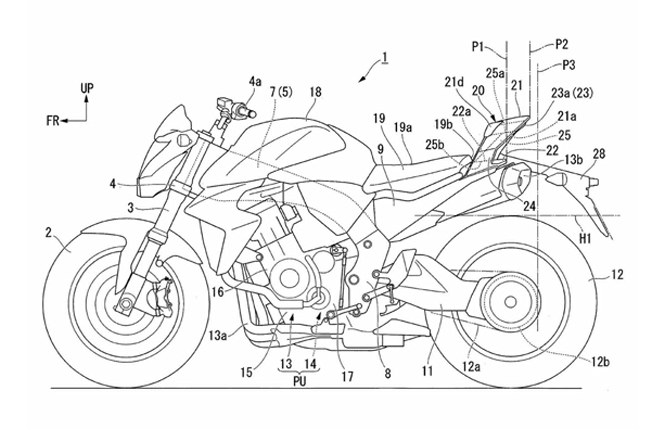 The brand's new design incorporates a massive tunnel that allows air to flow straight through it to help smooth out the airflow behind the rider, an area where bikes suffer aerodynamically over others. Effectively, it cleans up the airflow that is critical for a rider to hit high-speeds on two wheels. The only obstruction present from the design is a small central strut to give it some structural strength. The new design also suggests a removable tail-pack, that can be stuffed into the tunnels within the tail section for carrying small items. The pack is also wearable by the rider with a waist belt. The sketches of the patent suggest that the new tail design is mounted on a road bike rather than a race bike. This is made apparent by the presence of tail lights, a brake light, and an extended license plate bracket with turn signals attached to it.

While Honda’s new design appears to be the most practical and the most feasible for actual use as compared to more novel incarnations. We look forward to seeing this new design alluding to the new middleweight CBR600RR Fireblade. Perhaps Honda is looking to perfect the technology, rather than just simply imitating it.