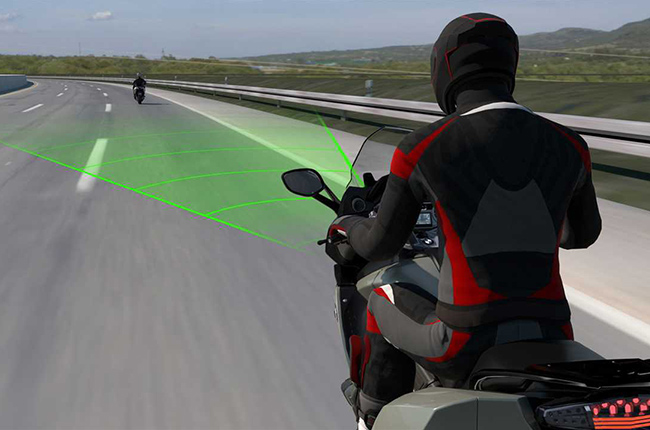 The idea of seeing active or adaptive cruise control (ACC), transcend from four wheels into two wheels is a popular piece of technology that a lot of the motorcycle brands have been playing around with. Now, BMW has just joined in on the fray.

We are all familiar with this type of technology, particularly in the automotive industry, as a lot of cars nowadays would offer this as a standard or added feature. KTM, Ducati, and Kawasaki have been known to be at the forefront of developing some form of ACC technology but none of their systems have ever reached production ripe enough for the market just yet. From the rumor mill, spy shots suggest that the Ducati Multistrada 1260 could be among the first motorcycles to officially feature the technology but as of the moment, it could still be anyone’s game. BMW has joined in on the race to develop its own active cruise control technology and unveiled its system by calling it the BMW Motorrad ACC. Its new system would allow the rider to set the bike’s desired cruising speed, and the system would take over as you release the throttle and the desired speed is maintained. BMW takes it further by allowing its ACC system to modulate the speed once a vehicle is detected in front. Its “active” system slows down the bike as the vehicle in front cruises at a slower speed and would accelerate back up to your desired set speed once the vehicle in front is out of the way. The system also allows for the rider between three tailing distances from further to closer to the vehicle in front and also allows you to decide how aggressively they want the ACC system to intervene. This is done by selecting between comfortable or dynamic modes from the ACC system. The system would also lower your vehicle’s speed as you approach corners and reach a comfortable leaning angle. As the lean angle deepens, the less invasive the system will be to give the rider more control over the corner.

It should be noted that the system wouldn’t really be effective in high-volume traffic situations where a lot of surrounding vehicles would be at a dead stop, the ACC wouldn’t be able to detect them, so the riders must be more alert and in full control. Ideally, cruise control has no use in these types of situations anyway. It is said that the K1600 could be the first bike to use BMW’s new ACC system. However, we have yet to get an official confirmation from them. In any case, the development of this technology is something we would gladly look forward to especially with long-distance tourer bikes.