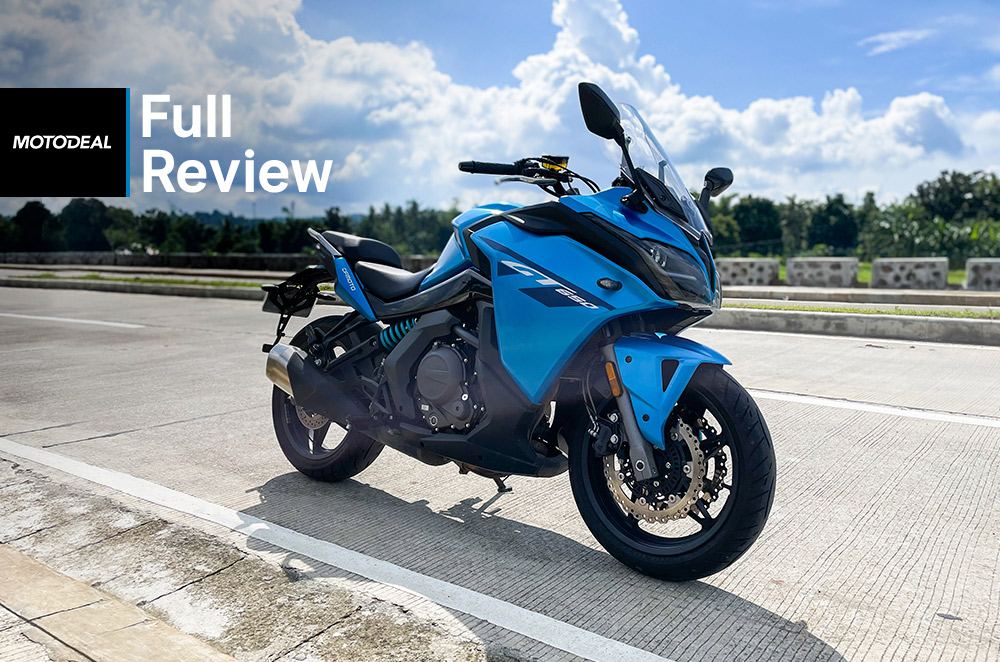 It seems that for long-distance touring, the entire motorcycle industry is opening up more and more options in the adventure touring segment—motorcycles with hefty bodies which sit tall and wide like the CFMOTO 650 MT or the BMW S 1000 XR. That’s not to say however that sport touring is a long-gone passion. The sport-touring body style is very similar to a sportbike at first glance but comes to its own in the details. The fully-faired front end is typically wider and heftier for better wind protection, the clip-on bars are typically elevated or traded in for more upright handlebars, the windscreen upfront is often larger and taller, and the wheelbase is often slightly longer for stability. All of which will allow the rider to chew up kilometers without breaking a sweat.

While sport touring motorcycles are hard to catch around these days, the soul of sport-tourers of the past is still alive in a few of the motorcycles of today. Kawasaki is one of the more mainstream brands in the sport-touring segment with the Ninja 1000SX and the H2 SX, Suzuki has the GSX-S1000F under its belt, and the KTM 1290 Super Duke GT is available for those who want to try out team orange. The thing is, many of these sport-tourers are quite inaccessible to your average motorcyclist being top-of-the-line motorcycles that are priced well above the budgets of many. The CFMOTO 650 GT however makes for a strong counterargument in this segment, proving that sport touring need not be an expensive riding style to get into.

What makes the CFMOTO 650 GT so special? It’s one of the most affordable sport-tourers you can get your hands on—and it’s locally available. Here’s what we think. 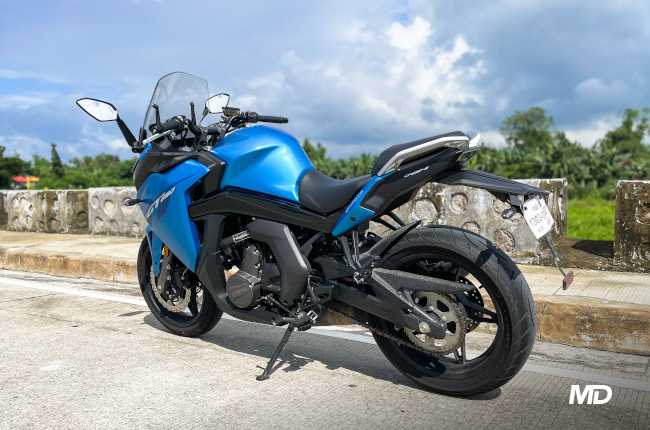 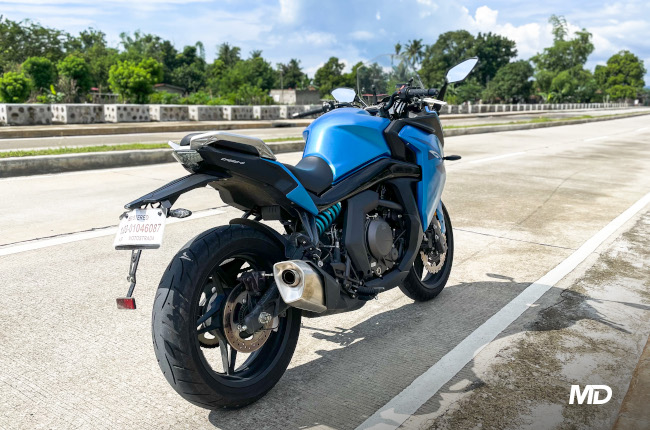 To the untrained eye, the CFMOTO 650 GT could pass as a bonafide sportbike designed to carve out corners and hit crazy speeds on the straight. After all, it is a fully faired motorcycle with road-oriented 17-inch cast wheels front and rear, and a slight backward-sweeping handlebar grip position. A closer look into the details however will tell you that the 650 GT is built more for touring than sport: the fairings are very large and wide to protect your legs from wind, the cockpit is equipped with a tall handlebar for upright ergonomics, the footpegs are mid-set for a comfortable bend on your knees, and the windscreen is set high enough for adequate protection to the chest.

Overall, the CFMOTO 650 GT is a looker—and tends to catch attention at the stoplights thanks to the large fully faired body, the well-designed frame and engine area, the unique headlight design with the prominent daytime running light, the laydown or side angled rear shock, and the smooth and vibrant blue which our test unit came dressed with. There were a few things however that could have been improved with the design, like smoothing out the underside of the pillion grab bars, making the engine area feel less plasticky, and updating the cast wheel to a more modern design. But let’s be honest, we’re nitpicking here. The 650 GT is without a doubt one of our favorite CFMOTO motorcycles in terms of design, and the design alone should be a good reason to get one for yourself. The 650 GT is a potent highway cruiser. The 649cc liquid-cooled parallel-twin sends 62 hp and 59 Nm of torque to the rear wheel in a very linear fashion through the 6-speed manual gearbox. While 62 hp may seem a bit lacking for a 650cc class motorcycle, the powerband makes up for it by providing a very predictable ride. It provides the rider with great control over the rear wheel through corners, acceleration, and cruising. There is enough power to get up to highway speeds incredibly quickly and enough power to overtake when needed—so long as you downshift accordingly to ride that wave of power on the top half of the rev range. The gearbox is also widely spaced meaning you won't have to switch gears too often when cruising or commuting through town. The clutch feel, however, could be the only downside with the engine, which felt a little bit unsure of its own biting point at times.

The 650 GT is without a doubt a sport-touring heavyweight. At 226 kg, the motorcycle can be quite a bit to handle through stop-and-go traffic and slow twisty roads. The weight and size however play a significant role when it comes to highway cruising, and make this motorcycle feel incredibly planted in spite of crosswinds and road imperfections. The suspension of the 650 GT is also quite comfortable for chewing up highway miles and commuting, but the front forks can feel a bit spongy when you’re being aggressive through the corners—then again, this is a highway cruiser and not a sportbike. We have no complaints about the braking system as the dual-disc J.Juan front brakes and the single-disc rear performed adequately throughout our entire day out on the saddle.

Overall, the 650 GT is a good performer and shoots above its price in many aspects. It’s built for the highway and it shows in how the engine, suspension, and brakes perform and would make for a great motorcycle to chew up kilometers on the highway. 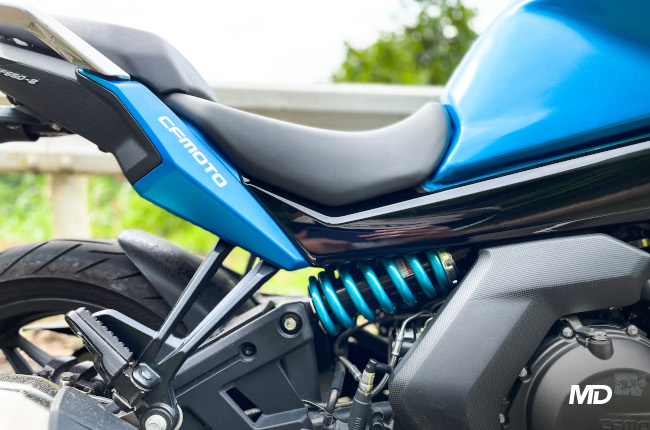 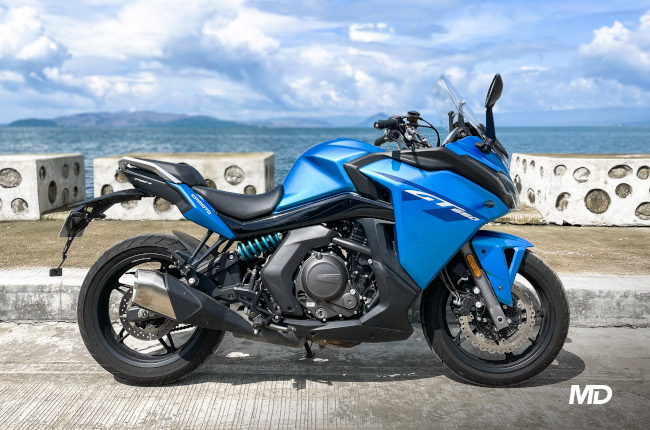 There isn’t much to be said about the CFMOTO 650 GT when it comes to comfort, only because it delivers quite well in this aspect. The seat is comfortable and did not create any sores throughout a full day of riding. The handlebar is adequately wide and is positioned quite high which means that you will be riding in a very comfortable upright position with enough leverage on the front wheel. The footpegs are also mid-set which doesn’t demand a tight bend on your legs, and the seat height comes in at just 795mm making it very approachable and confidence-inspiring to the average rider.

One drawback to the comfort of the 650 GT would be the engine vibrations, which seems to progressively increase as the revs go up. This means that riding aggressively at the top half of the rev range might rattle the bones, but cruising and commuting will be quite comfortable thanks to the widely spaced gear ratios. Another would be the small bump compliance of the rear shock which tends to kick up on your bottom on small to medium-sized bumps, but we’re sure that this could be dialed in through a bit of fiddling on the rear shock’s settings. Overall, however, the CFMOTO 650 GT is still a motorcycle that delivers a great amount of comfort—greater than the majority of the motorcycles you see on the road. Any motorcycle built for the long haul must be a comfortable motorcycle, and the 650 GT delivers. 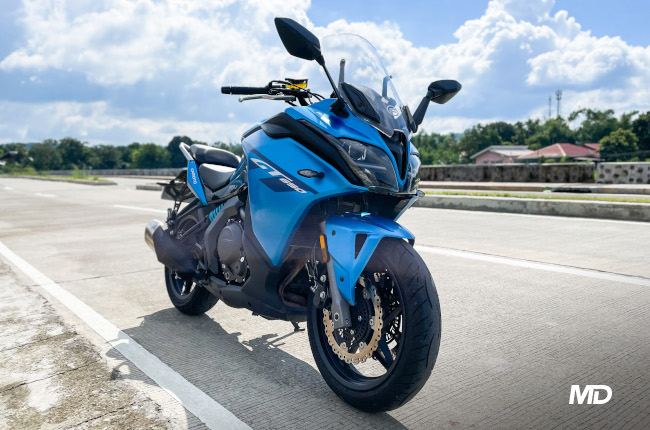 The CFMOTO 650 GT is a fairly well-equipped motorcycle and features a few key elements which further aid in the sport tourer proposition. Upfront, the 650 GT sports a full LED headlight system with a pass switch and was adequately bright for most nighttime riding conditions. The motorcycle also comes equipped with an adjustable windshield that provides ample wind protection to the chest, but unfortunately won’t save your helmet from the wind. Despite this, the wind on your helmet is clean air and isn’t dirty or turbulent air like other motorcycles. The windshield adjustment system is also quite easy to operate and makes use of two knobs that can be loosened and tightened by hand, and the windshield moves up and down a fair couple of centimeters to adjust properly for varying levels of protection.

In the cockpit, we were pleasantly surprised to see a full-color TFT display. There is also a switchable rider mode, operable from the left handlebar switch, and toggles between two gauge layouts on the TFT display. The display also switches between bright and dark mode automatically and quickly. On the handlebar, the 650 GT is equipped with backlit switches which means operating the various buttons will be quite an easy task regardless of ambiance and is quite a premium feature that elevates the riding experience.

Apart from this, the basic tech and safety package of the motorcycle is quite standard in this entry-level premium segment, including LED lights on the taillight and turn indicators, a Bosch ECU, and an electronic fuel injection (EFI) system, and an ABS system for added safety upon braking. Overall, the 650 GT meets our expectations of a tourer in this segment and price range and is a refreshing balance between a basic no-frills riding experience and a tech-crammed two-wheeled machine. 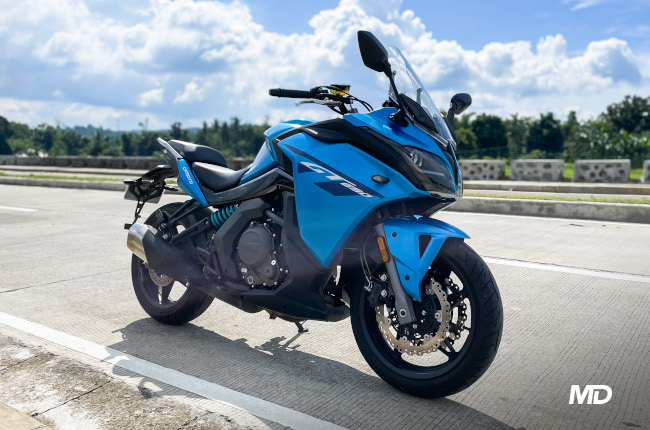 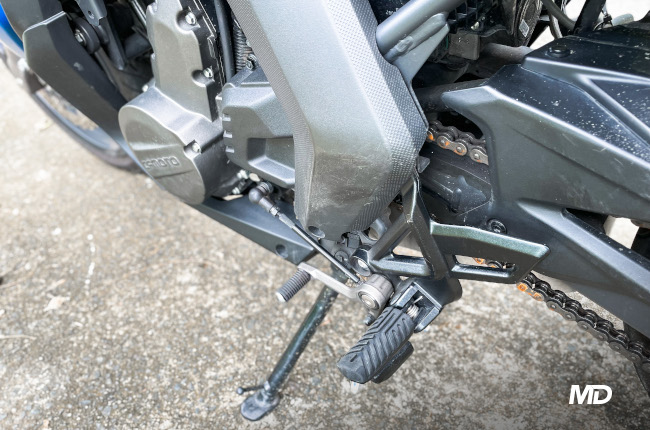 We took the 650 GT out through nearly all kinds of road and traffic conditions imaginable. Dense rush hour traffic along the pothole-ridden streets of Metro Manila, provincial roads and highways in the outskirts of town, and highway stints that lasted for a few hours—you name it. After putting the motorcycle through its paces, we can confidently say that the 650 GT is most comfortable on open roads and on the highway. Taking the 650 GT through Metro Manila traffic was a difficult task. It can most definitely be done for the strong-willed, but puttering around on a hefty motorcycle that weighs in at 226 kg can be quite tiresome for the daily commuter. It also does not have the widest turning radius and can make tight maneuvers a bit tricky. Again, it can most definitely be used as a city commuter, but we would recommend daily riders to swing a leg over a CFMOTO 650 NK or 700 CL-X instead.

On the highway and on open provincial roads, however, the 650 GT felt most at home. The overall design and features package of the motorcycle makes you feel like you can cover any distance effortlessly and tirelessly. The wind protection on the chest and legs are great, power and gear spacing is adequate, and the ergonomics package is near perfect for a bike that’s built to go the distance. It still is a large and heavy bike at the end of the day, which means that you will need to watch out for where you park and where to pull off tight maneuvers. That aside, the CFMOTO 650 GT falls nowhere short in being a great motorcycle for highway and open road duties and would make a fantastic motorcycle to tour the country with. At the end of our stint with the CFMOTO 650 GT, we were refreshed to have experienced what this entry-level sport-tourer had to offer—a pleasant, no-frills touring motorcycle that gets the job done properly and effortlessly. As mentioned in the first section of this article, most sport touring motorcycles tend to be a bit inaccessible to most riders due to engine size and outright cost, but the 650 GT breaks the wall around this sport-touring exclusivity and makes this experience quite accessible with a selling price of just P335,000 or about half the price of most other sport-tourers in the market. Value for money is the name of the game with the 650 GT. CFMOTO is keeping sport-touring alive and accessible for riders who are looking to enter the touring segment without blowing a ton of cash.