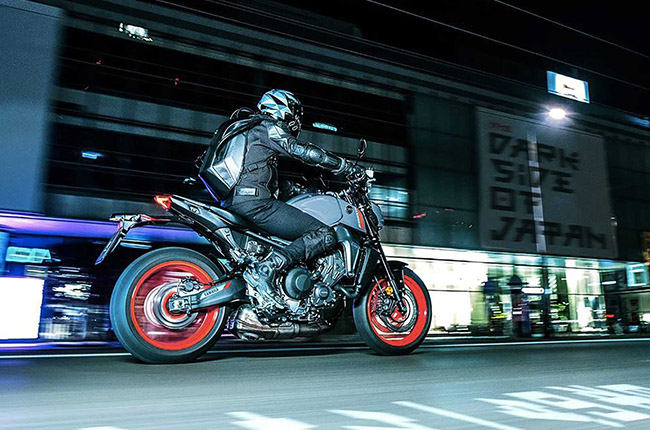 Just yesterday, leaked photos of the new 2021 MT-09 started surfacing and circulated in several online publications. As predicted by the teaser, the photos revealed significant changes in the design of the new motorcycle. Soon after, and on the very same day, Yamaha decided to give us a little shock and awe and officially released the new 2021 MT-09. Was this leak actually orchestrated by Team Blue? In any case, we’re not complaining about it.

Yamaha releases a teaser video of its upcoming MT range. The MT-09’s design updates bring some drastic changes in its overall design and dimensions. The first thing that you’d notice is its all-new headlight cluster. The new MT’s headlight looks similar to the MT-03’s predator headlights. However, instead of using slashing lines of angry looking LED strips on top, they repositioned the strips on the sides of the bulging light pod. From the side, its panels are now integrated into the fuel tank and sit higher than the chassis exposing more of the bike’s rigid, lightweight aluminum frame and its horizontal lateral pillars. Its Radiator frame, swingarm, and footpeg assembly all got a redesign, which drastically changes the bike’s overall appearance. It now sports a rerouted exhaust system ending with an underbelly muffler. Its wheels also get a redesign from its old-petal style wheels now sporting 17-inch dual-star wheels for both the front and rear As to its dimensions, the 2021 Yamaha MT-09 now has a slightly shorter wheelbase of 1,430 mm which is 10 mm shorter than its predecessor’s. It now has a higher ground clearance of 140 mm and tips the scales at 189 kg, lighter than the previous year’s model. As expected, big changes were also seen in its now Euro 5-compliant inline-triple engine. Displacement is now up to 890 cc from 847 cc and it delivers a power rating of 117 hp at 10,000 RPM and 93 Nm of peak torque at 7,000 RPM. Its bore remains unchanged at 78 mm but stroke is now a little bit longer at 62.1 mm. Meanwhile, the compression ratio, fuel delivery system, and its six-speed transmission, multi-plate assist, and slipper clutch also remain unchanged with the MT-09. The new MT-09 is kept aloft with 41mm KYB inverted fork with adjustable preload, compression, and rebound with 130 mm off travel for the front and a KYB preload and rebound damping-adjustable mono-shock for the rear. Stopping duties are provided for by a pair of 298 discs for the front and a single 245 mm disc at the back, both equipped with standard ABS. A new ride-by-wire Yamaha Chip Controlled Throttle (YCC-T) and an Accelerator Position and Sensor Grip (APSG) derived from the R1 but tuned specifically for the MT-09 is now also equipped into the new model. The MT-09 is the first naked sportbike to feature a high-tech 6-axis IMU that acts as the processor for its lean-angle sensitive traction control system, slide control system, lift control system, and brake control system. It now is also finally equipped with a new 3.5-inch full-color TFT display and a quick shifter for clutchless gear changes.

Yamaha’s newest naked sportbike offering is expected to start hitting showrooms and dealerships worldwide starting January 2021 and will be priced at $9,399 (P454,300). It will come in three color options with Storm Flue, Icon Blue, and Tech Black. Of course, Yamaha Philippines still hasn’t made any official announcements yet as to its availability. However, we’re sure it wouldn’t be long before they start reaching our shores. We’ll be sure to keep you all posted.