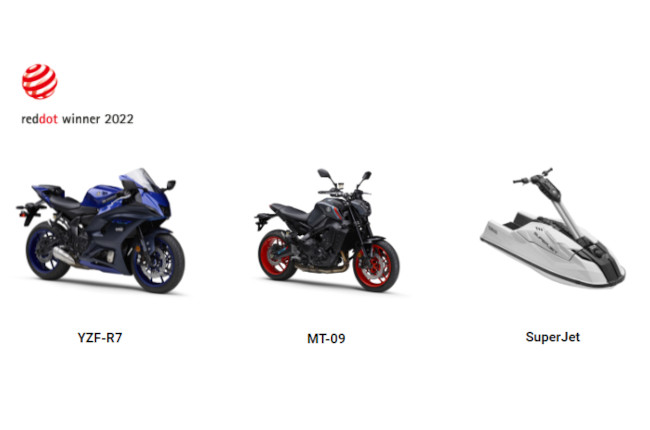 Congratulations are in order for Yamaha once again for 2022 as Team Blue managed to bag another set of awards for the 11th year and counting. It’s not just bikes that were recognized at this year’s ceremony, but also a Yamaha jetski called the SuperJet.

Since 2012, Yamaha has been bringing home the Red Dot award for several of its products. Organized by Germany’s Design Zentrum Nordhein Westfalen, one of the industry’s most celebrated awards recognizes everything from cars like the Kia Stonic, to motorcycles and even gear. The first motorcycle that got an award from the Red Dot this 2022 is the Yamaha YZF-R7. The sportbike serves as the successor to the venerable Yamaha R6. In place of a four-cylinder motor, however, the R7 makes do with the MT-07’s powerplant, it’s a 270-degree parallel twin with an assist and slipper clutch along with a revised set of aerodynamic fairings. The next awardee is the Yamaha MT-09. Now lighter and even darker than before, the MT-09 is a stunner of a bike adhering to Yamaha’s “Dark Side of Japan” philosophy. The current model year features a slew of updates that sharpen the model’s already impressive ride. Featuring the CP3 inline-three, the bike shed about 4 kg following its update by adopting Yamaha’s SPINFORGED WHEEL technology, as well as a CF aluminum die-cast frame.

Finally, who can forget what is perhaps one of the most notable awardees, the Yamaha SuperJet? After 30 years in the market, the SuperJet finally got an update recently, and it sports the Tuning Fork brand’s inline three-cylinder motor which is not the CP3. Instead, it is the TR-1, a marine engine that has 1,049 ccs of displacement. The watercraft was yet another product in Yamaha’s portfolio that was recognized this year by the Red Dot Design Awards.

To keep its streak, Yamaha will need to continue pushing out update after update and product after product in order to turn its 11-year streak into a 12-year streak by 2023.