Yamaha Malaysia has just unveiled its latest sports naked offering, the MT-25. Following the same “Darkness” theme of the rest of its MT motorcycle lineup, the MT-25 has been dubbed as the “Rush of Darkness” sharing the same powerplant as the YZF R25 quarter-liter sportbike. 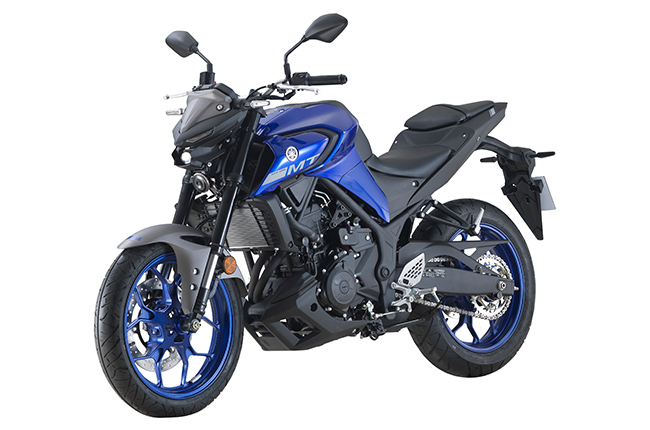 The first thing you would notice about the new MT-25 is that it now sports a new full-LED split assembly “Predator” headlight that’s also seen on its bigger MT siblings such as the MT-09. The LED headlight assembly is divided between the daytime running lights (DRLs) and the centrally mounted headlight. The MT-25’s turn signals also now come in full-LED with a hazard function as standard equipment. The new “Predator” headlight assembly gives it that menacing futuristic look, and an impression that the MT-25 means business to everyone else on the road.

It is powered by a 250 cc, parallel-twin, liquid-cooled DOHC engine with electronic fuel injection. Power figures claim an output of 35.5 hp at 12,000 RPM and 23.6 Nm of torque at 10,000 RPM. It is mated to a six-speed manual gearbox. Its tank has been redesigned to incorporate some air-intakes on the sides to help keep the engine cool at higher speeds. To dampen bumps and road imperfections, the MT-25 is equipped with 37 mm KYB inverted forks for the front and a 7-step preload-adjustable rear mono-shock. Stopping duties are done by a single hydraulic disc for both the front and rear with standard two-channel ABS. The MT-25 tips the scales at only 165 kg, making it a light an agile machine that would be perfect for your daily commute. It comes in two color options namely, Ice Fluo, and Yamaha Blu. Currently, the 2020 Yamaha MT-25 is already being sold in Indonesia and priced 53.9 million Rupiah (P186,190). However, in Malaysia, it has a suggested retail price of RM21,500 or roughly around P251,000. Considering that in the Philippines, the Yamaha YZF R3 is priced at P259,000, but Yamaha Philippines is yet to release its naked counterpart in the country. Neither have we had official word just yet if and when they would even introduce the MT-25 to the Philippine market. In any case, we’ll be sure to keep you posted of any new developments about the Yamaha MT-25, should we hear any more updates.