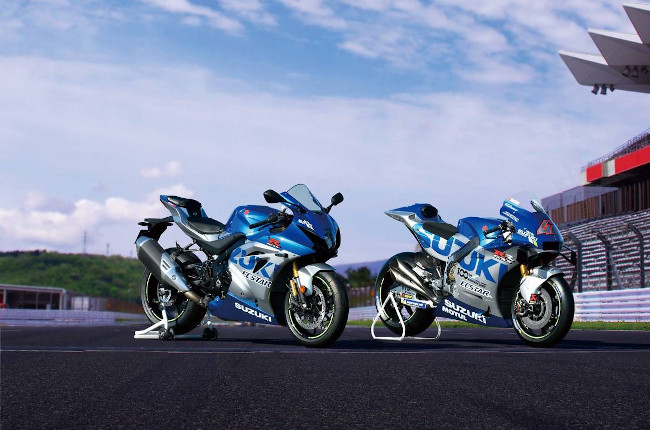 The House of Hamamatsu has bestowed some minor updates on its most popular range of sportbikes, the GSX-R. Consisting of three models, the iconic superbike can be purchased in the international market in three flavors—1000cc, 750cc, and 600cc. While the Philippine market only gets the outgoing GSX-R1000, we are lucky enough to get the GSX-S750, which is in essence, a naked version of the GSX-R750. Needless to say, given the much-needed refresh of these bikes in the global sphere, the thought of Suzuki launching the GSX-R750 and GSX-R600 in the local market is truly an exciting notion, especially given the success of the likes of the Kawasaki Ninja ZX-6R in the local market.

With that, let's take a closer look at what Suzuki has to offer with the new and improvd GSX-R range. Starting with the biggest, baddest machine, the GSX-R1000 can be bought in two variants, the standard, and the race-oriented R version. In standard trim, it retains the decently performing Showa Big-Piston fork and Brembo braking system. What's changed is that Suzuki is now offering the JDM-exclusive colorways—Metallic Matte Black No. 2 and Glass Matte Mechanical Gray—to the international audience. As for the performance-oriented GSX-R1000R,  Suzuki has outfitted it with a premium Showa BFF and BFRC-Lite suspension setup, up and down quick-shifter, and a suite of advanced electronic rider aids, similar to what we find in the new Suzuki Hayabusa. Moving on to the smaller bikes, which unfortunatley, we don't receive in the local market, the Suzuki GSX-R600 and GSX-R750 remain, for the most part, unchanged. Just like what Suzuki had done to the 2021 GSX-S750, the two middleweight supersports get new color options consisting of Glass Blaze Orange/ Glass Sparkle Black and Glass Matte Mechanical Gray/Pearl Brilliant White. They're powered by engines which are now the better part of fifteen years old, albeit tuned to meet modern-day emissions standards.

The 2022 Suzuki GSX-R1000, GSX-R750, and GSX-R600 all earn a new, special-edition livery commemorating the company's centennial anniversary. The special livery does command a slight premium, however, it gives the bikes a more sporty and nostalgic aesthetic. While no news about any of these bikes making it to the local market soon has surfaced, the current-generation GSX-R1000 is pretty much the same bike, and goes for a retail price of P1,169,000 for the top-of-the-line R variant.