EICMA 2021 is in full swing, and Kawasaki just dropped a bomb in the form of the 2022 Ninja H2 SX SE. Thanks to a set of radar-enabled features, Team Green's sport-tourer is now more advanced than ever before.

With the latest ARAS on the H2, it's now on par with some of the best models from the likes of Ducati and BMW. Adaptive cruise control can keep the rider's distance from the vehicle ahead using three settings: Near, Medium, and Far. Get too close, and the forward collision warning feature triggers with a visual warning. The blind-spot detection feature can also help the rider through traffic from behind with the rear-mounted radar. 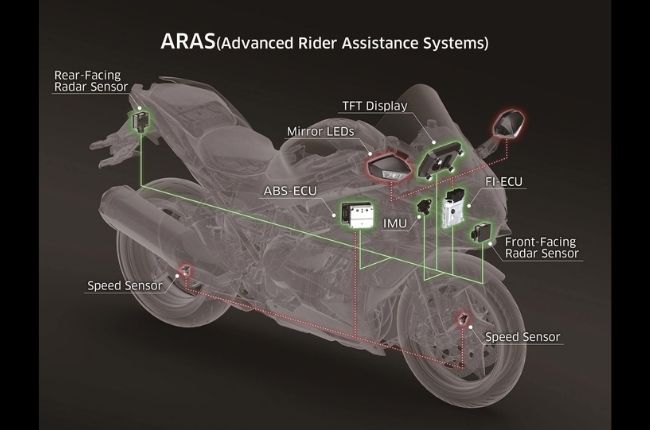 All in all, the radar-enabled features could be valuable for many riders. It's all controlled by the new 6.5-inch full-color TFT screen, which also works with Spin, Kawasaki's new companion smartphone app.

To complete the electronic updates, Team Green put a vehicle hold assist feature and its proprietary Kawasaki Intelligent Proximity Activation Start System (KIPASS). The former assists with the rear brakes at a stop, allowing the rider to rest and relax. The KIPASS feature can be used to activate the main switch and release the fork lock. At its core, the Kawasaki Ninja H2 SX SE is still powered by the 998cc supercharged inline-four, albeit with some adjustments. There's a new exhaust without a pre-silencer and adjusted cam timing for better low to mid-range power delivery and torque.

The 2022 Kawasaki Ninja H2 SX SE will be available in the US and other markets starting at $27,500 (P1.38-million). Local availability is unknown for now, but the Ninja H2 1000 currently sells in the Philippines.