Italdesign has revealed a new electric motorcycle concept for Ducati. Dubbed the 860-E, the design appears to be based on the 860 GT from the mid-1970s. Ducati has been dipping its toes into electric vehicles in recent years. It even offers an entire range of electrified bicycles. E-bikes are one thing, but producing an electric motorcycle seems like quite the leap for the company. The retro-futuristic design would look stunning in the flesh, but is Ducati ready to shift to an electric future? The 860-E concept was produced by Italdesign, an Italian design and engineering firm with a long history beginning in 1968. The firm has worked with prominent car brands, previously designing vehicles for automakers like Volkswagen, Ferrari, and Maserati. Italdesign has also worked on motorcycles, including the Suzuki RE5 Rotary naked bike. The RE5's design helped pave the way for the more boxy and angular bike that started to appear in the early-1980s. Italdesign has also continued its productive partnership with Ducati, having recently collaborated on a foldable electric bicycle, the Ducati Urban-E. 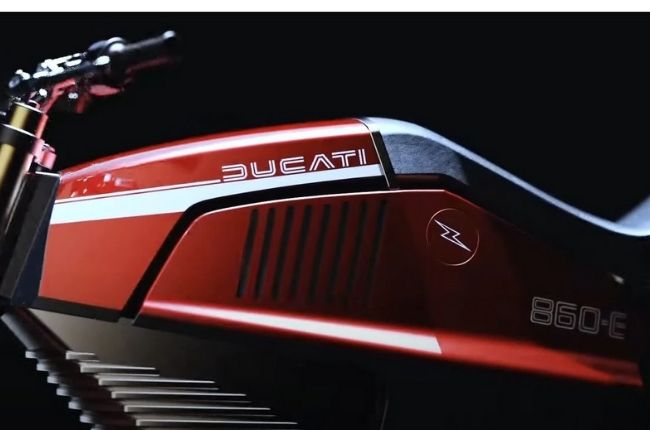 As for the 860-E itself, the concept looks clean and well thought out. The influences of the 860 GT are readily apparent, from the round headlight to the lines covering the side panels. Despite the throwbacks, it's clear that this is a modern motorcycle. The concept even includes design cues from newer Ducati models, like the upside-down forks and single-sided swingarm. All this makes the 860-E look like a true Ducati while firmly looking toward the future. There are currently no plans to put the Ducati 860-E into production. This isn't much of a surprise since Italdesign is known for creating case studies that never see the light of day. However, given the firm's long-standing relationship with Ducati, nothing is impossible. The concept design could still be used for a future model.

The company could do well by creating an entirely new electric division. Harley-Davidson has done this with the LiveWire brand, and there's no reason why Ducati can't do the same. As more motorcycle manufacturers include EVs in their lineups, Ducati could eventually bite the bullet and release a full-fledged electric motorcycle of their own.