The Pierer Mobility Group, parent company of popular motorcycle manufacturers KTM and Husqvarna, seems to be gearing up for the future, particularly on the Husky side of things. We recently covered the company’s plans of launching an electric street bike dubbed the E-Pilen. This time around, reports from multiple sources suggest that Husqvarna will be unveiling the E-01 electric scooter in 2022.

The Husqvarna E-Pilen will come with a 15kW electric motor

Based on the concept art, the E-01 electric scooter is definitely a head-turning machine. Employing streamlined bodywork and flowing lines, it looks like a futuristic mobility device found in the International Space Station. However, it’s interesting to note that beneath this innovative aesthetic lies a very down-to-earth formula. In fact, the Husqvarna E-01 electric scooter is being co-developed by Indian automotive giant Bajaj Auto. With the Indian company holding a majority stake in KTM, it makes perfect sense that the European motorcycle giant would seek the help of Bajaj, who already has a foot in the electric scooter world. 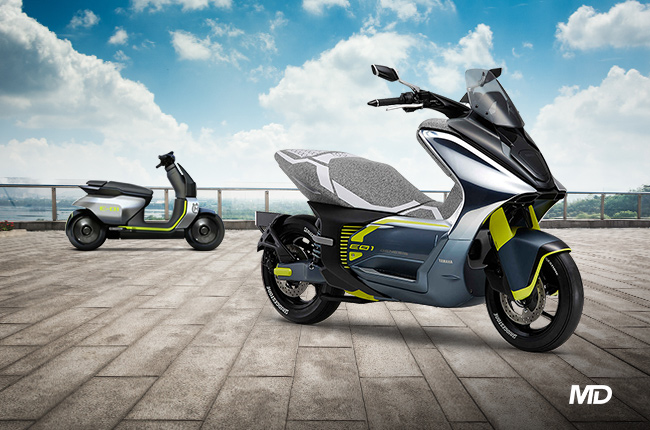 That said, chances are the Husqvarna E-01 will share the same platform as the Bajaj Chetak, a rather popular commuter in the Indian market. While initially slated for launch sometime in 2021, the COVID-19 pandemic forced a slowdown on the development of the E-01. This has caused Husqvarna to move the unveiling of the new scooter to 2022. So, what can we expect from this upcoming electric two-wheeler?

On the feature front, we can expect to see an 11kW electric motor at the heart of the Husqvarna E-01. Translating to around 15 horsepower in internal-combustion lingo, the Husky electric scooter will have similar performance figures as scooters like the Yamaha NMAX and Honda ADV 150. However, given the bike’s electric nature, we can expect it to boast far superior torque and overall engine response. Initially slated for a European launch, the Husqvarna E-01 will make a great addition to the A1 learner-compliant fleet of two-wheelers in the region.