With major motorcycle shows like EICMA, Tokyo Motor Show, and Intermot deciding to postpone or cancel their scheduled shows to health and safety concerns brought about by the COVID-19 Pandemic, The Bangkok International Motor Show decides to go ahead with their show rather than canceling, but of course, with stringent safety protocols in place, and a special virtual motor show to showcase its highlights. It serves a centerstage for showcasing the latest motorcycle offerings that will be offered to its neighboring Southeast Asian countries. AP Honda, the official distributor of Honda motorcycles in Thailand officially unveiled its latest maxiscooter offering, the Forza 350. Shigito Kimura, AP Honda’s Executive Chairman was more than excited to present the new Forza 350 maxiscooter at the Bangkok Motor Show.

As a market leader, Honda is ready to come back to stimulate the Thai motorcycle industry again, beginning with the launch of the all-new Forza 350, the world's first in Thailand.
Shigito Kimura
Executive Chairman, AP Honda Company Limited 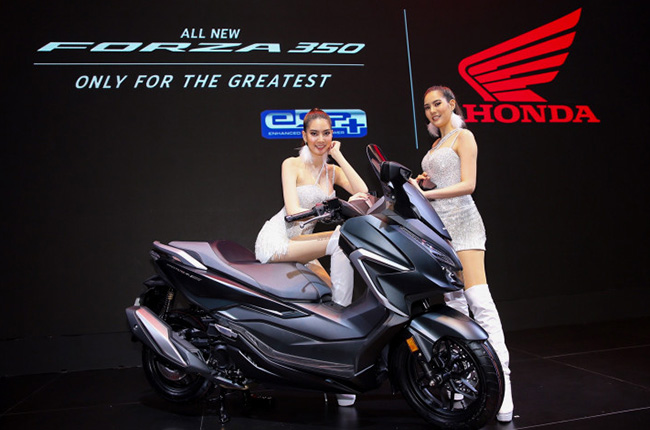 Its official specs are now out. The Honda Forza 350 is equipped with a 330 cc, 4-valve eSP+ (enhanced Smart Power) engine for more efficient combustion, it is mated to high-performance CVT automatic transmission with roller valves, and a bigger 5.5-liter airbox for better air-intake efficiency for the engine. Its radiator is positioned in front of the scooter for improved cooling and better weight distribution. It is now being offered in four colour options namely black, white-blue, red-black, and blue-black. It now comes with an electronically adjustable windscreen, an in-console USB charger with a bottle holder, a digital cockpit, Honda’s Smart key system (remote), front and rear ABS, and an under-seat compartment that can easily fit 2 helmets. It is officially priced for THB 173,500 in Thailand or equivalent to P272,000. The Honda Forza 350 sure makes a very promising addition to Honda’s Scooter lineup that would surely have a lot of potential for Southeast Asian Countries, including ours which are considered as more scooter-centric markets. It now gives the consumers more options as it directly pits against Yamaha’s XMAX 300 which has been seeing a lot of success in the country. Do you think the Philippines deserves to have another maxiscooter offering from Honda?