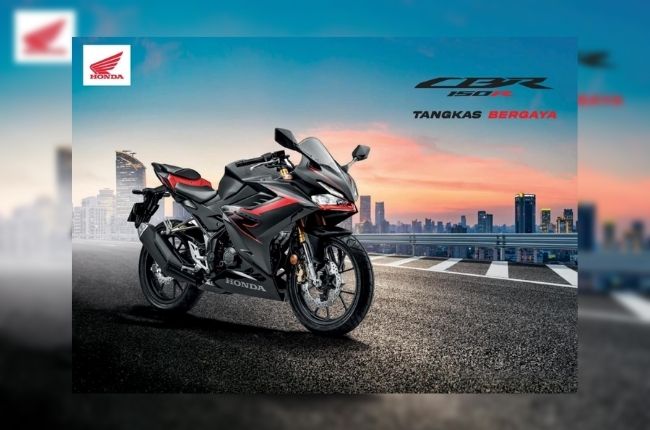 As Honda's entry-level sportbike, the model gives riders a taste of power and performance without breaking the bank. The Malaysian-spec CBR150R is priced at an equivalent of P150,000, given the current exchange rate. Design-wise, the bike is said to be inspired by its larger stablemate, the CBR250RR. Malaysia also enjoys new color options that include Matte Charcoal Grey Metallic and Candy Scintillate Red. The new CBR150R looks more aggressive with its sharper fairings and split-type seat. The sportbike also gets a smoked, slanted windscreen. Below it is a quad-LED headlamp setup complemented by LED turn indicators.

Honda also sprung out with gold-finished inverted front forks, which adds a premium feel to the sportbike. More than that, there's an upswept exhaust with a metallic tip to finish off the exterior.

As for features, Honda did surprisingly well for a bike at this price point. The new CBR150R gets a fully digital LCD instrument panel that displays a variety of riding information. It also gets single disc brakes on both ends, dual-channel ABS, and an emergency stop signal. The sportbike rides on a Pro-Link mono-shock rear suspension setup. The Malaysian version of the Honda CBR150R is powered by a 149cc, liquid-cooled, single-cylinder engine that puts out 16 hp and 14.4 Nm of torque. A 6-speed manual gearbox connects to the mill, with a slipper and assist clutch coming in as standard.

There's no word yet on whether Honda plans to bring the new CBR150R to the Philippines. We think the model is due for an update, and Honda could have something up its sleeve.

For now, the local-spec CBR150R is available in the Philippines. Compared with the Malaysian version, its engine is slightly different in terms of power, producing 17 hp and 14 Nm of torque. The Honda CBR150R starts at P152,900.