The partnership between KTM and CFMoto has already reaped a whole raft of benefits and paid dividends for both motorcycle brands. Through this partnership, CFMotor will be handling the manufacturing of several of KTM’s best selling motorcycles such as the Duke and RC range, the 790 and 890 parallel twins. The Hangzhou based company is in turn given shared access to KTM’s engineering, R&D, and industry connections giving them the opportunity to produce among the best bikes to ever come out of China. One of its best-selling bikes in the Philippines, the 400 NK, and its other motorcycles could be considered as direct products resulting from the allegiance of the two brands. With that being said, a new streetfighter, adventure bike, and a whole middleweight lineup are all potentially in CFMoto’s pipeline in the very near future.

The most popular highway-legal bike on MotoDeal is the CFMoto 400 NK.

Yet, for 2021, CFMoto has already begun to step up its game with the release of its latest touring machine, the 1250TR-G. CFMoto’s latest long-distance muncher was unveiled at this week’s China International Motorcycle Exhibition (CIMA) held this week in Chongqing. The 1250TR-G was initially intended and previously released for law enforcement and with its production model now unveiled, it is considered as the most powerful motorcycle ever produced by a Chinese motorcycle manufacturer. It is powered by KTM’s LC-8 1.279 cc V-twin engine capable of pumping out a hefty 140 hp and 121 Nm of peak torque. CFMoto leveraged KTM’s relationships with other industry brands and made sure the 1250TR-G was decked out with premium components, electronics, and touring accessories. In charge of stopping duties for the powerful bike are a set of radial-mounted calipers that were made by Brembo. For its suspension setup, the bike is also equipped with KTM-owned WP shock and forks to soak up all the road bumps and suspend the travel-friendly touring machine. 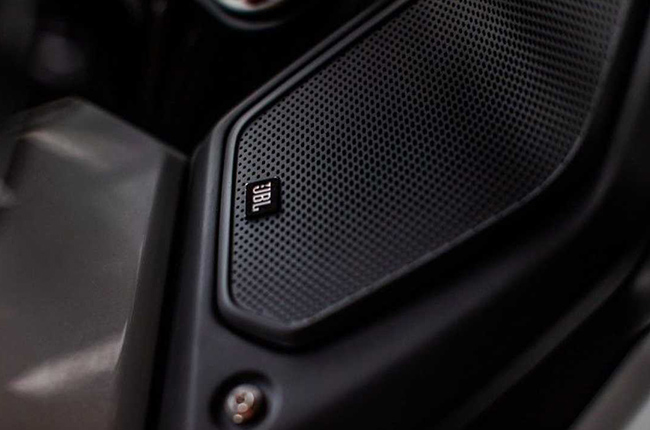 JBL will provide all your entertainment needs with a built-in stereo system with a 12.3-inch TFT dash. The screen will relay all the information you need including tire pressure and suspension settings while also allowing you to adjust the four riding modes, navigation, and multimedia system. Bluetooth connectivity also comes as standard with heated grips, heated seats, and an electronically adjustable windscreen giving you the complete touring package.

We haven’t had any official confirmation yet on any news about its price, or as to when it will start hitting showroom floors. At the moment, it is only scheduled for the Chinese market. Motostrada, CFMoto’s official Philippine distributor will surely keep us informed of its official release if and when it finally arrives on our shores.