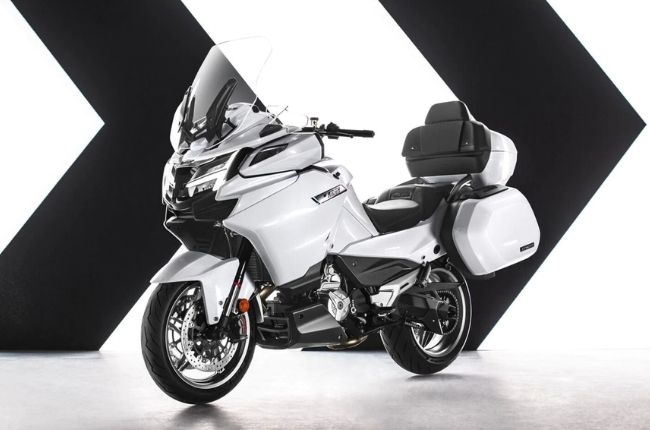 CFMOTO's growth in the Philippines has been remarkable to witness, going from a relatively unknown motorcycle maker in 2019 to taking the third spot in the most inquired-for brands on MotoDeal in 2021. Its latest release, the 700 CL-X Sport, debuted late last year to much acclaim. While Motostrada, its exclusive distributor, already has a stellar lineup for the brand, we can't help but ask—is there room for more? The CFMOTO 1250 TR-G first appeared in 2021 as the most powerful production bike to ever come out of China. Carrying a KTM-derived 1,279cc V-twin engine, the TR-G has had a significant presence in the Chinese police force and private security firms.

Now that the touring bike is reportedly heading to the European market, could the Philippines be next? As many of CFMOTO's local releases do, the TR-G would offer an exciting mix of performance and affordability in an attractive package. Tuned for torque, the touring bike reportedly delivers around 140hp, putting it in direct competition with the BMW R 1250 RT and its P1.875-million local price tag.

Predictions put the TR-G's European price at or below €16,000 EUR (around P920,000). If that holds water, it means the TR-G would undercut the BMW's price by at least half. That's mind-boggling, and it could bode well for CFMOTO and the TR-G in Europe. The TR-G isn't all power, either—it's got tech that could challenge bikes way above its price point. CFMOTO equipped this touring bike with the largest TFT display in any production motorcycle. It also features a WP electronic suspension, a JBL stereo system, and Bluetooth-enabled multimedia with navigation. More than that, the TR-G also features Bosch ABS and Brembo radial calipers. So, will we ever see the CFMOTO 1250 TR-G in the Philippines? That's up to Motostrada, but we think the premium touring bike could have a place in the local market as a worthy challenger to European and Japanese marques. If it does launch in the Philippines, we expect the TR-G to carry a price tag under P1 million.