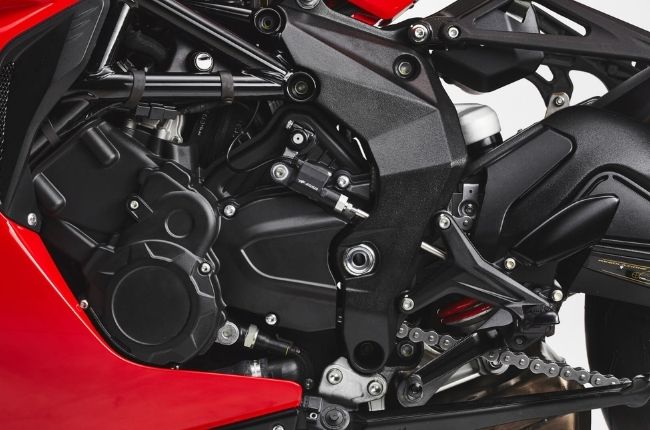 MV Agusta co-developed the 5.5's parallel-twin engine with QJ Motor, a fast-rising Chinese company that also has ties with Harley-Davidson. While that motor is exciting in its own right, the Lucky Explorer 9.5's engine could end up being more significant down the line.

According to MV Agusta CEO Timur Sardarov, its newest liquid-cooled, 931cc, inline-triple engine will likely find its way to some of the brand's most well-known models. The F3, Turismo Veloce, and Super Veloce, and more MV motorcycles could soon have 950cc variants up for sale.

On the Lucky Explorer 9.5, the said 931cc mill delivers about 121 hp and 102 Nm of torque. Those figures will likely change as the engine accommodates different states of tune on other models. For the F3 and Superveloce, for example, the inline-three cylinder engine could put out more top-end power to embody the models' racing DNA.

Apart from the 931cc engine, MV Agusta is also reportedly working on a new platform and an even more powerful motor. Sardarov says it's over 1000cc, and that has led some to speculate on the return of the F4 superbike, only this time carrying the latest technology.

It will take at least two and likely three years for all these models to enter production, but at least we know that MV Agusta looks primed to continue innovating its lineup.

The Schiranna-based brand also seems ready to make the jump to electric motorcycles, but it's not abandoning the internal combustion engine just yet. MV Agusta may have a few more tricks up its sleeve, and we can't wait to find out what they are.