A new set of spy photos of the upcoming 2021 Ducati Multistrada in its final testing stages have leaked and eventually made its way to the web. While the recent photos seem to have been intentionally leaked for publicity and marketing purposes, we’re not complaining. It shows us how far in its development stages they’ve reached ever since we first caught an early glimpse of its first batch of spy photos. 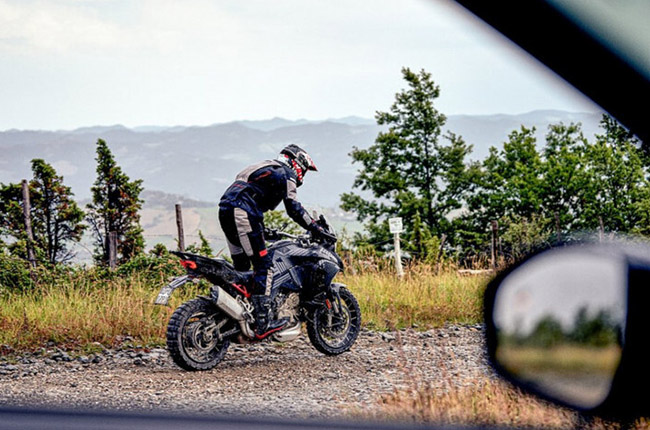 It is already far from speculation that the 2021 Multistrada will be sporting a new V4 engine, similar to that of the Panigale V4 S. However, new reports are suggesting that its powerplant could be an entirely new engine, one that’s more suited for off-roading. We know that it will draw power from a V4, liquid-cooled engine but its official power figures are yet to be officially released by Ducati. For reference, the current model of the Multistrada 1260 is powered by a 1,262 cc mill that churns out 155.8 hp and 129.5 Nm of torque. Other details about the new 2021 Multistrada are still tightly kept under wraps. Based on the photos alone, we know that it runs on 19-inch and 17-inch tubeless wire-spoked wheels, and it now sports a double-sided swingarm, a sudden departure from its previous generation’s single-sided feature. That being said, we can still expect the same fit and finish Ducatis are known together with all the top-shelf performance parts and a slew of tech and electronics. To top that off, we all recognize that familiar Multistrada fascia that Ducati decided to keep.

Reports suggest that Ducati could make use of lighter carbon fiber components to save some weight and make it it even lighter than the outgoing Multistrada 1260 together with a slimmer tank. Its estimated release date is set to be as early as January 2021 in the U.S.A. Ducati Philippines is yet to make any official announcements about its official launch date, but we’ll be sure to keep you guys in the know should any new updates come up.