Last Saturday, Jun 20, 2020, BMW Motorrad Philippines officially launched the new F 900 R online. As with all other new bike launches now, the unveiling of the new BMW F 900 R was done completely online with the virtual event hosted by Paolo Abrera, with officers and executives from BMW appearing including Timo Resch, vice president of sales and marketing for BMW Motorrad. The F 900 R has been one of the most anticipated motorcycles to be released by BMW after it’s original launch and unveiling at BMW’s breakfast ride last March 29 was canceled due to the nationwide lockdowns brought about by the COVID-19 global pandemic. Now that we’re easing into the new normal, and with social distancing measures still in place, an online virtual launch was more than fitting for BMW’s latest roadster offering. The F 900 R embodies the spirit of sporty riding fun, straightforward handling coupled with a unique set of equipment and tech options while at the same time priced competitively to give you excellent value for money. Said to be the dynamic roadster for purist fun, It is powered by a parallel twin-cylinder, 895 cc, four-stroke, liquid-cooled engine that’s capable of producing 105hp and 92 Nm of torque. Its engine is a bored-out version of BMW’s F 850 GS with machined cylinder heads instead of cast pistons creating a distinct powerful sound usually heard only in V-twin engines. It is mated to a 6-speed transmission that’s capable of accelerating from 0-100 km/h in 3.7 seconds and reaching top speeds above 200 km/h.

Damping duties are provided by upside-down telescopic forks upfront while a double-sided swing arm with a central suspension strut keeps the bumps at bay at the rear. The F 900 R also comes with selectable ‘Rain’ and ‘Road’ riding modes as standard which can be set through its full-color 6.5-inch TFT screen with BMW motorcycle connectivity for the standard trim. A full LED-lighting system along with a keyless push-to-start button also comes as standard for the F 900 R. 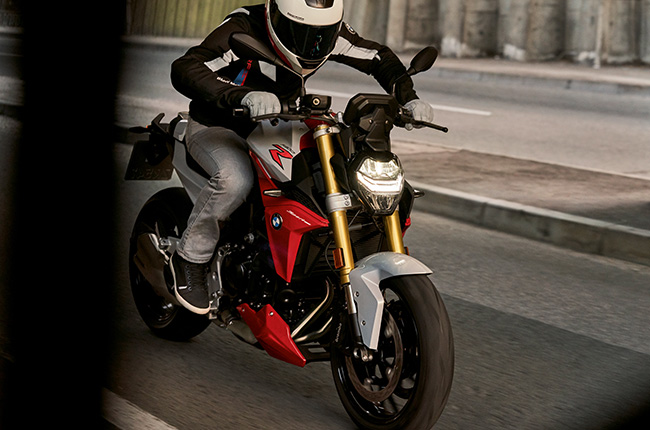 The F 900 R comes in Blackstorm metallic and San Marino Blue metallic color options for the Standard trim while its Style Sport trim would come in exclusively in Hockenheim Silver metallic and Racing Red. The Standard is priced at P655,000 while the Style Sport is priced at P775,000 putting them well within the very attractive price points of its known Japanese rivals, yet what you give is a dynamic purist roadster that’s made in Germany. Timo Resch, BMW Motorrad’s VP of Sales and Marketing was more than excited to present this new offering from BMW.

The new F 900 R, our new roadster in the midsize segment I think is one of the most fitting product to your market. I think with such a product being very nimble to ride, having a very cool look, and obviously having this roadster feeling of a two-cylinder with a price point that is attractive and at the same time with more than 100 hp is a very very smart package.
Timo Resch
VP of Sales and Marketing, BMW Motorrad He remains optimistic about the brand’s success in the country with BMW’s motorcycles perfectly tailored for the Philippine market.