Pinoy motorcycle enthusiasts have always been into sportbikes. From top-shelf liter-class machines, to entry-level 150cc sporty commuters, there’s just something about these fully faired motorbikes that seems to catch our fancy. Perhaps it’s the superstar status and exhilarating racing action that we see in the likes of the MotoGP or the WSBK. Or perhaps it’s their futuristic, aggressive styling which makes them look like they’re going at 300 kilometers per hour sitting still. Whatever it is, there’s no denying that you’re likely going to look twice if you see or hear a sportbike on the street.

Today, we’re not here to talk about high-performance, four-cylinder screamer sportbikes. Instead, we’re going to take a look at two of the most popular entry-level sportbikes in the Philippine market. In the blue corner, we have Yamaha’s tried and tested beginner friendly sportbike, the YZF-R15. While on the red corner, we get Honda’s ever reliable, race-inspired CBR150R. Which one is the better bike? Read on to find out. 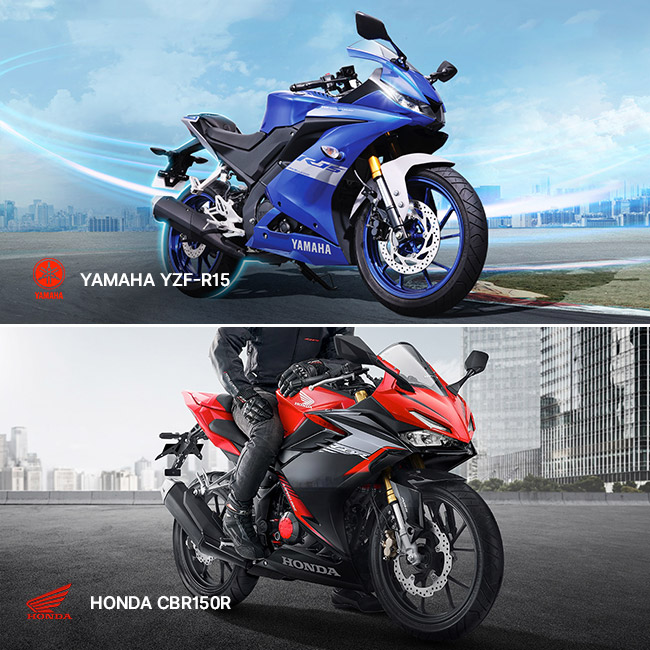 From a performance standpoint, both bikes are equipped with some of the most high-tech motors you’ll find in the 150cc segment. Let’s start with the Honda. The CBR150R is powered by Honda’s 149cc, liquid-cooled, single-cylinder engine. Equipped with dual overhead cams, a four-valve cylinder head, and Honda’s PGM-FI technology, the CBR150R ekes out a respectable 17 horsepower and 14 Nm of torque—just right for commuting around the city, and tackling twisty roads, or even the race track on occasion.

Moving over to the blue corner, the specs are even more impressive. Those who are fans of Yamaha will certainly be well acquainted with the mill we find in the YZF-R15. Considered as the platform on which the entire 155cc platform is based upon, the R15 gets the most powerful iteration of Yamaha’s 155cc, single-cylinder motor. Equipped with liquid-cooling, and Yamaha’s proprietary Variable Valve Actuation (VVA) technology, this engine pumps out an exhilarating 19 horsepower, and optimizes efficiency at low RPMs, while maximizing power output at the upper reaches of the rev range. As far as features go, if you put the Honda CBR150R and the Yamaha YZF-R15 side-by-side, it’ll be hard to tell which bike is actually better. For starters, both bikes sport the unmistakable sportbike, fully-faired aesthetic. In fact, both bikes resemble their respective liter-class stablemates, with the CBR150R bearing some styling inspiration from the CBR1000RR, and the R15 sporting the same menacing design as the YZF-R1.

Looking at things from a deeper perspective, we see the Yamaha YZF-R15 clearly has the upper hand in this showdown, however. Equipped with 37mm inverted forks, the R15 will provide just a bit more front-end rigidity, and less unsprung weight than what we’ll get from the Honda’s standard telescopic setup. Apart from the slightly better suspension, however, both bikes are more or less, equally matched with standard LED lights, a digital instrument cluster, and of course, front and rear disc brakes equipped with dual-channel ABS. 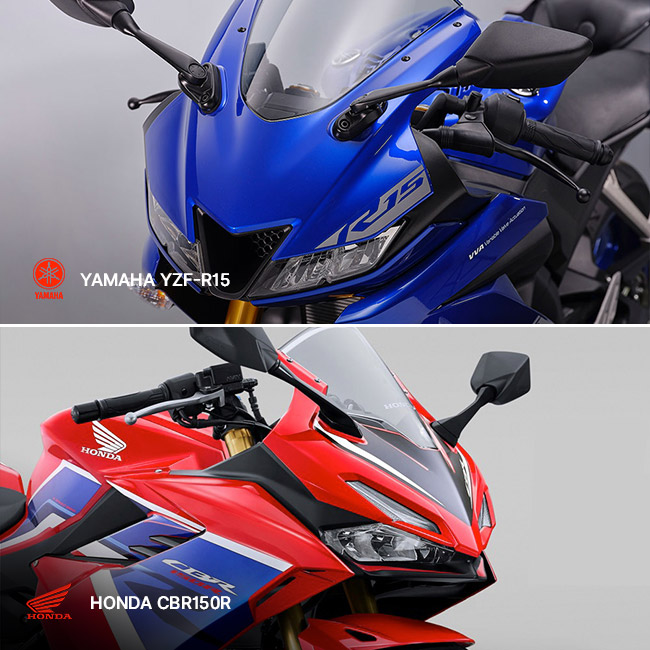 When it comes to pricing, both the Honda CBR150R and the Yamaha YZF-R15 occupy the premium entry-level space. That said, the YZF-R15 is slightly more expensive at P164,000, as against the Honda CBR150R’s P152,900 starting price tag. This P11,000-premium is well worth it, however, given the R15’s more powerful engine and better equipped suspension setup. However, that’s not to say that the CBR150R isn’t worth your hard-earned money. As is the case with all bikes from the Big Wing’s stable, you’re assured with top-notch build quality, and reliability that has been engineered to stand the test of time.

So, which one should you buy, then? Well, that all boils down to what it is you’re looking for. Do you want a sharper, more performance driven machine which you could perhaps take to the track and learn the basics of sporty riding with? If that’s the case, then the Yamaha YZF-R15 would be the clear winner. However, if you want a comfortable, good looking commuter which gives off a sporty aesthetic, then maybe the Honda CBR150R would be a better fit to your lifestyle.