There is no doubt that some of the most attractive bikes on the market are made by Royal Enfield. The motorcycles' very alluring value for the money makes the bargain even more alluring. However, the appealing retro appearance and openness to be modified are two things that all Royal Enfields share.

Yes, one of the few manufactures that actively encourages its customers to customize their bikes is Royal Enfield. However, RE's classic look and soulful performance are more about the true spirit of motorcycling than performance and technology. Therefore, if you're looking for a new motorbike, you might want to think about a gleaming, retro-styled model from Royal Enfield. Let's examine some of this company's top beginner-friendly products in more detail.

5 things we love about the Royal Enfield Classic 350 The Royal Enfield Classic 350 combines its seven-decade style with a powerful engine to give an enduring appeal and respectable performance over the course of its years of existence. The teardrop-shaped gasoline tank of the Royal Enfield Classic 350 is accented with a matte-finished leg guard and pinstripe, and it is completed with the name in bold letters. This motorcycle is designed to draw attention, and is equipped with traditional amenities like analog gauges and halogen headlamps and taillamps as standard equipment. It has a 346cc air-cooled, 4-stroke, SOHC engine that cranks out a respectable 20 horsepower and 28 Nm of torque. Unquestionably one of the greatest entry-level cruisers on the market is the Royal Enfield Meteor 350. Even if it doesn't quite qualify as an expressway vehicle, the Meteor 350 does have a few positive attributes. To begin with, it's a great stepping stone for someone looking to go to larger motorcycles. The Meteor 350 would be the ideal alternative if you are currently riding a Vespa S 125 and want to upgrade but aren't precisely confident enough to swing a leg over a bigger, expressway legal bike. With a 350cc single-cylinder, air-cooled, fuel-injected motor, the Royal Enfield Meteor 350 offers incredibly approachable performance. This bike offers big bike proportions in a beginner-friendly design and has a respectable 20 horsepower available. 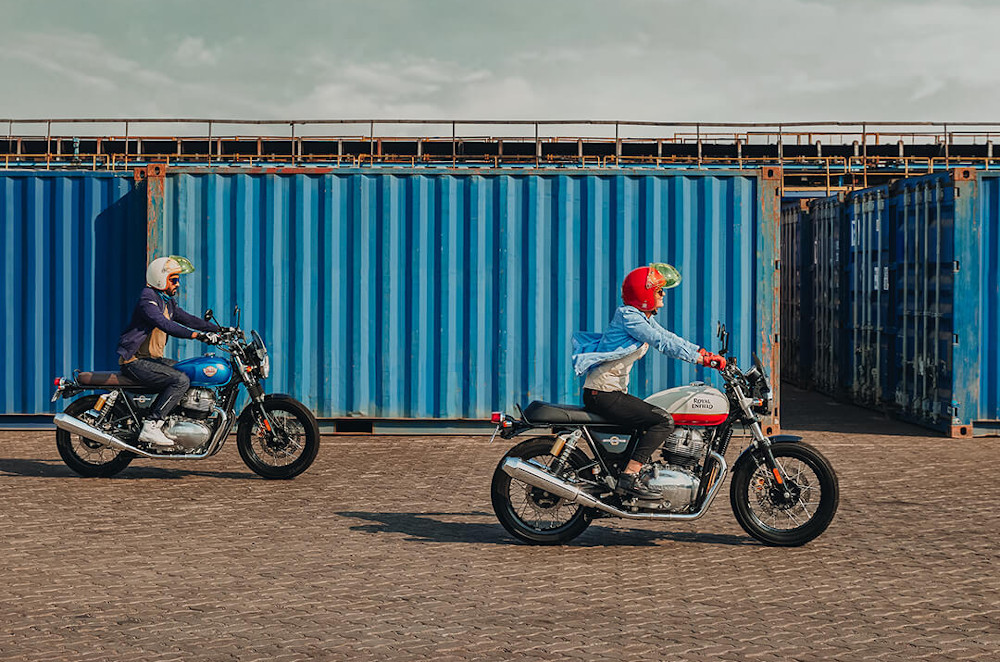 The next motorcycle on our list might be regarded as Royal Enfield's most practical model overall. The Interceptor 650 is a superb and adaptable platform, ready to transport you anywhere you need to go in comfort and style, whether you set it up as a custom creation or keep it entirely stock. Though it comes in a more sane, upright package, the Interceptor 650 uses the same basis as the Continental GT. Standard handlebars are used instead of the low-slung clip-ons, but the powerful 648cc parallel twin motor is still there. There is bound to be an Interceptor 650 that appeals to you because it is offered in a wide range of both vintage and contemporary colors.

Turn heads on the streets and on the highway: Royal Enfield Continental GT 650 The Royal Enfield Continental GT 650 is perhaps the company's most fashionable and performance-focused motorbike. This bike has aggressive clip-on bars that give the rider a hunched over stance. Its athletic posture is aided by its sleek, level boneline, and of course, its classic vintage style pays homage to an era that helped to shape the riders of today. The Continental GT 650 has a 648cc parallel-twin engine at its core. Fuel injection is used, and it produces a reasonable 47 horsepower. It's crucial to remember that the Continental GT 650 represents a bygone age of motorcycles, as such, don't expect it to compete with other naked middleweights when it comes to outright performance.