The neo-retro craze in the motorcycle world has undoubtedly taken the industry by storm. These days, nearly all motorcycle manufacturers offer one form or another of a retro-style bike, be it a scrambler, cafe racer, or something in between. However, it can be said that not all brands carry as much heritage to well and truly have a motorcycle that boasts legacy and a nod to the past. Ducati and Triumph, however, are not brands like these. These two manufacturers have been around for more than half a decade, and have more than proven their worth in the motorcycle industry.

As such, in order to bring their heritage to the modern day, the two companies released their own modern-day evocations of bikes from years past. Ducati has undoubtedly been dominating the market with its Scrambler range of bikes, particularly the Icon. Meanwhile, Triumph has been releasing spin-off models of its popular Bonneville range with the likes of the Street Twin. Having said that, let’s take a closer look at these two bikes, and determine which one is best suited to your lifestyle.

What makes the Ducati Scrambler Icon an excellent all-rounder?

Before we dive straight into horsepower figures and engine configuration and displacement, it’s important to note that sheer performance was never the name of the game when it comes to these two bikes. Instead, these bikes seek to deliver honest to goodness excitement in a platform that’s inspired by the raw aura of motorcycling, yet equipped with modern-day amenities and safety features.

That said, let’s start things off with the Italian stallion. Ducati has equipped the Scrambler Icon with its tried and tested 803cc L-Twin motor. First seen in the Ducati Monster 795 back in 2013, this air-cooled twin features Ducati’s famed Desmodromic valve timing, a two-valve cylinder head, and electronic fuel injection. It produces a respectable 73 horsepower, making for an exciting ride once you open the throttle, however, remains tractable at low RPMs.

From the Hinckley Company, on the other hand, the Street Twin gets a simpler, yet equally exciting powerplant in the form of a 900cc liquid-cooled, SOHC, 270-degree parallel-twin. It has a similar character as that of the Scrambler’s engine, yet produces just a tiny bit less power at 65 horsepower. It also gets a more basic 5-speed manual transmission.

The Triumph Street Twin gets a new Gold Line edition 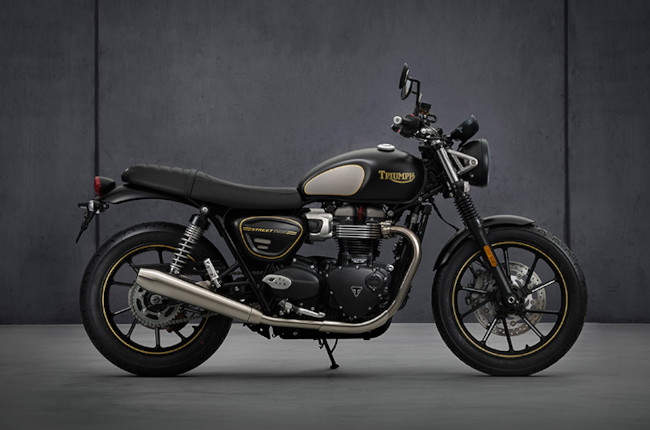 As far as features are concerned, don’t expect too much in the way of technology when it comes to these two bikes. Both Triumph and Ducati have made these two bikes as basic as possible, in order to retain the pure riding experience they promise to deliver. However, this isn’t to say that these bikes aren’t feature-equipped. For starters, the Scrambler Icon gets premium LED lighting, complete with LED daytime running lights (DRL). Safety features include ABS—and that’s pretty much it. Oh, it gets a check-engine-light and a low-fuel warning light, too.

Meanwhile, the Triumph Street Twin leaves the Ducati in the dust in terms of creature comforts. It brags switchable traction control, a slipper-clutch, Rain and Road riding modes, and even a tire pressure monitoring system (TPMS). It gets a digital instrument panel, too, and yes, a fuel gauge! For added convenience, Triumph has thrown in an under-seat USB charger, as well—a welcome accessory for long rides out of town.

5 of the most fuel-efficient big bikes

When it comes to price, these two bikes cost within the same ballpark of each other—it really depends what flavor it is you’re after. For the Ducati, the base model Dark variant fetches a rather affordable P599,000. However, prices easily skyrocket as you opt for more options. The slightly more premium Journey 77, with its touring-ready amenities commands a premium at P699,000. While the Icon standard, in Ducati’s iconic Sixty2 yellow, retails for a steep P705,000.

The Triumph Street Twin on the other hand, occupies the P600,000-mark. The base model, available in Jet Black, retails for P670,000. Fancier colorways in the form of Cobalt Blue and Matte Ironstone command a P10,000 premium, and retail for P680,000.