Few other motorcycle manufacturers are as tenured as Triumph, especially when it comes to crafting a beautiful, well-balanced modern classic. Over the years, Triumph has had quite a number of retro-styled street bikes, all of which sharing the same roots in the classic and timeless Bonneville. Today, one of the most beginner friendly offerings stemming from the Bonneville platform is the Street Twin.

The Triumph Street Twin dons all the aesthetic styling cues which make for a timeless modern classic, and packs quite a decent punch. With a 900cc, SOHC-equipped, 270-degree crank, twin-cylinder motor, the Street Twin pumps out a decent 64 ponies and 80 Nm of torque, making it both a relaxing roadster, and a peppy machine when you twist the throttle. Transferring the power to the ground is a five-speed manual transmission equipped with a torque-assist clutch system. Triumph has equipped this otherwise retro machine with some modern touches, too, consisting of a throttle-by-wire setup with programmable traction control and selectable traction control. The bike gets ABS as standard, as well as very premium-looking LED tail light, and a digital LCD instrument pod. 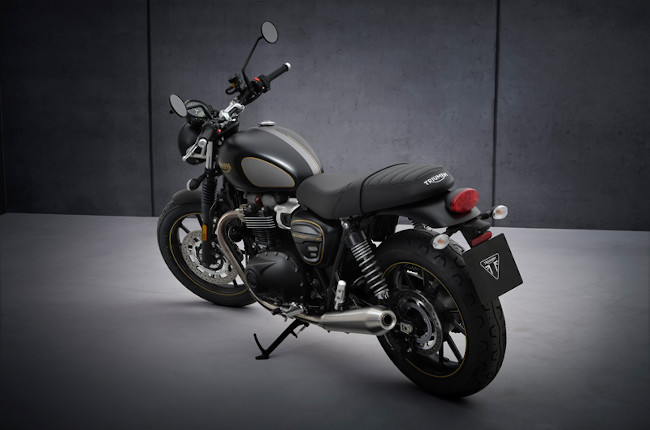 For the 2021 model year, Triumph has unveiled a new, special edition version of the Street Twin to make it even more special. Dubbed the Gold Line, this trim level of the Street Twin incorporates some subtle aesthetic nuances for the ever discerning enthusiast who wishes to ride dapper at all times. As has always been the case with Triumph’s special-edition machines, the Street Twin Gold Line favors a more subtle design approach, as opposed to the loud and even gaudy editions of other marques. That said, this bike features a dominantly black base, with some extremely tastefully executed, hand-finished gold accents.

The folks at Triumph are calling this color scheme Matte Sapphire Black. It’s clear to see that this is by far one of the most gorgeous finishes to ever grace the Street Twin line of bikes. A classy Triumph emblem is painted onto the fuel tank, while the knee detents on the fuel tank sport a brushed aluminum finish. Moving towards the center of the bike, we find hand-painted side panels which boast Street Twin lettering finished consistently in gold, like the other parts of this limited edition machine.

There’s no denying that the Street Twin Gold Line is one special motorcycle. So special, in fact, that Triumph is only producing 1,000 units of this machine. Retailing at $10,150, or the equivalent of around P490,000, there’s no certainty whether or not any of the 1,000 units will be allocated to the Philippine market. If any do happen to make their way to our shores, expect it to come at a premium significantly more than its current sticker price of P670,000.