The Ducati Monster is unlike any other modern motorcycle in that it is easily recognizable. This motorcycle, which comes in many shapes and sizes, is partly responsible for the modern-day naked motorcycle recipe. The method for producing this motorcycle was as simple as removing the fairings from Ducati's performance sportbikes. While the Ducati Monster is far from a pure sportbike without its fairings, it does exhibit the raucous, athletic, performance-oriented spirit of Ducati's sportbike family.

In many ways, the new Ducati Monster is the most performance-oriented Monster the House of Borgo Panigale has ever produced. The Ducati Monster, which is now available in the Philippines for P920,000, is far from inexpensive. It does, however, have the goods to back it up. Let's look at five things we like about the Ducati Monster, particularly, its 2022 guise.

What is Ducati’s Desmodromic valve timing and how does it work? The Ducati Monster is powered by a 937cc 90-degree V-twin engine, or L-twin in Ducati lingo. This liquid-cooled, fuel-injected motor produces an exceptional 111 horsepower in sport mode, thanks to a full suite of modern technology. When the bike is switched to Urban mode, the output is reduced to a more manageable 75 horsepower, making it comparable to other middleweight naked bikes on the market.

Ducati has included a number of technological features in the engine, including traction control, wheelie control, and even launch control for explosive starts at stoplights. Even more impressive is the fact that, despite increasing the displacement, Ducati has managed to make the engine even lighter than the outgoing Monster 821.

The 2022 World Ducati Week will kick off in July Ducati Monster fans will note one significant difference in the current generation Monster. That is, Ducati has abandoned the classic trellis frame that has appeared on every previous Monster model. Ducati has replaced it with a more typical backbone chassis that uses the engine as a stressed member. There are two key advantages to this. The first is enhanced torsional rigidity, which results in a more responsive handling experience.

The second major advantage is, of course, a reduction in overall weight. The Monster now weighs just 188 kg with a full tank of gas and is ready to ride thanks to Ducati's new engineering upgrades. As a result, the current generation Ducati Monster is one of the lightest Monsters ever produced by Ducati. In terms of styling, Ducati has done away with the iconic trellis frame design that has become associated with the Ducati Monster. Instead, Ducati has opted for a slimmer, more athletic appearance. In true Ducati  fashion, the new Monster takes the form of a sharp and aggressive streetfighter that clearly flaunts some design cues borrowed from its super sport siblings.

The Monsters muscular fuel tank made the duets streamlined body work gives it an aggressive, almost supermoto-esque appearance which suggests that the bike is more than willing to have a fun, thrilling ride. Its LED lights and TFT color display exude premium quality, too, truly elevating the Monster moniker to the modern era. 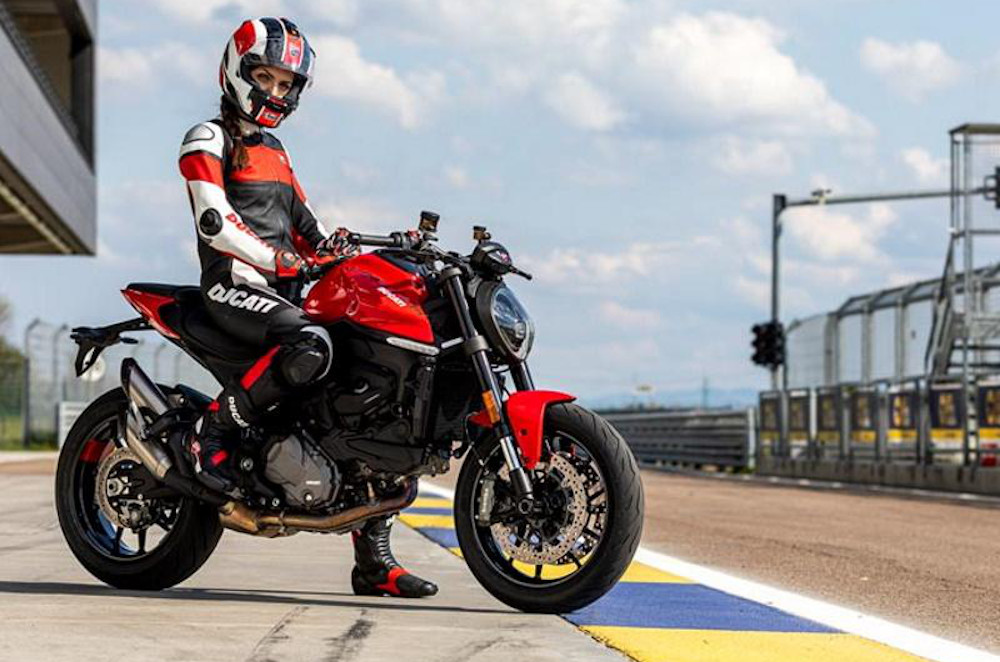 All of the new Monster's features and refinements make it a very flexible all-rounder that will undoubtedly challenge some of the Japanese big four's premium products. It may be modified to fit a variety of rider skills thanks to its customizable ride modes. Furthermore, the bike's lightweight design makes it practical as a daily commuter.

To top it off, Ducati has been working hard to improve the engine's reliability and service life. The Monster's 937cc Desmodromic engine now has a 15,000-kilometer service interval between oil changes and a 30,000-kilometer period between valve adjustments. The Ducati Monster was once known for its simplicity and no-nonsense enjoyment. With the advancement of technology, even entry-level motorcycles now have premium tech features. The new Ducati Monster is no exception. It has a number of electronic rider aids, configurable riding modes, and a plethora of other features aimed at improving the overall riding experience.

The new Ducati Monster comes with a full-color TFT display, which is standard on many motorcycles this year. The rider can use this display to change a variety of settings on the motorcycle, including the riding modes and other selected features.