Diehard fans of World Superbike would probably be familiar with the roots of this adrenaline-filled sport. As opposed to MotoGP, WSBK uses iterations of actual, road-going motorcycles, making the sport the perfect avenue for manufacturers to showcase the capabilities of their machines. This in turn, gives us mere mortals a glimpse of what we could experience if we end up being one of the lucky ones to actually own a road-going supersport.

That being said, World Superbike first debuted in 1988 and featured some notable bikes and riders  One of which would be Fabrizio Pirovano. Racing for Yamaha during the 1990 WSBK season, Pirovano was a truly talented racer. Although never winning a championship, he consistently found himself finishing in the top 3, and providing exhilarating racing for both spectators and fellow racers. 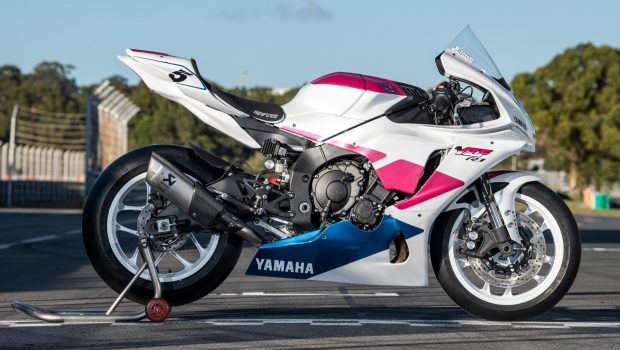 Mr. Pirovano raced with Yamaha in the early stages of World Superbike, finishing in the podium on multiple occasions. After spending  the better part of two decades racing competitively, he retired in 2006. After a battle with cancer, Fabrizio Pirovano passed away in 2016

The Italian competed during the early years of WSBK with Yamaha, finishing runner-up on two occasions. He retired in 2006 and sadly passed away from cancer in 2016. In his honor, Yamaha Europe built a one-off replica of his 1990 WSBK season race bike out of a present-day Yamaha R1. Featuring a similar livery to Pirovano’s racing machine, the Yamaha R1 ‘Piro’ edition was auctioned off after the 2020 WSBK finale at Estoril. After being taken on a tribute lap by Alessandro Gramigni, the bike was auctioned off and fetched a tidy €27,000 (₱1.540 million).

Sold to an anonymous buyer, the all proceeds from the Yamaha R1 ‘Piro’ edition are being donated to Fondazione Oncologia Niguarda Onlus, a cancer research charity which the Pirovano family has been in close contact with since Fabrizio’s passing.