TVS has partnered with Walt Disney India to bring its favorite superheroes to life with its new Marvel Super Squad edition scooters. Based on the TVS Ntorq 125, the Super Squad Edition features liveries inspired by three of the favorite Avenger superheroes from the Marvel cinematic universe namely, Ironman, Black Panther, and Captain America. The three new liveries, Invincible Red, Stealth Black, and Combat Blue take colors inspired by the costumes of the Avengers. For those who already have the Marvel helmets made by HJC and Spyder, these scooters would be a perfect match for them. The Super Squad logo and the Iconic Avenger’s ‘A’ are included in the scooter’s graphics on the front panel, and right below the instrument cluster. The Stealth Black edition’s livery is inspired by the Black Panther’s jet black and purple colored suit that are blended into the scooter’s decals. The signature Wakanda Forever salute and the number 66 is seen on its graphics which denotes the year (1966) when Black Panther made its debut in Marvel comics. 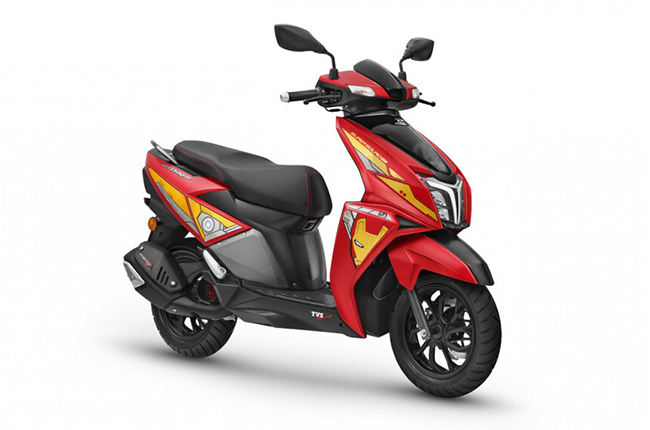 Meanwhile, the Invincible Red livery takes inspiration from the red and gold design of Tony Stark’s suits. Ironman’s iconic helmet is embossed on the scooter’s leg shield with the arc reactor seen on the scooter’s side panels. The bike is aptly called the Mark XXIV which signifies Tony Stark’s 29th Ironman suit along with the number 63 that signifies the year (1963) that Ironman was introduced into Marvel comics. 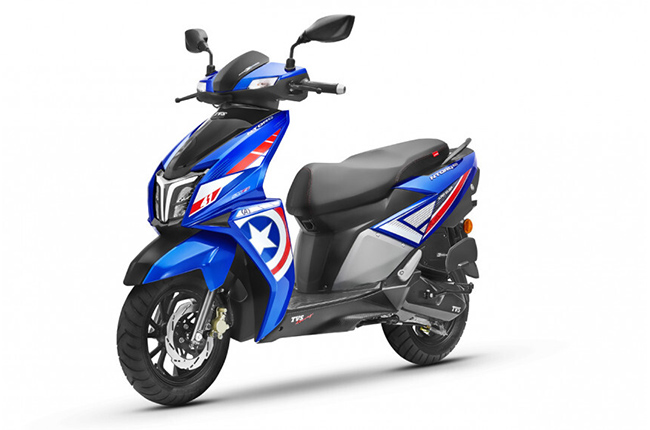 Lastly, the Combat Blue livery is based on the first Avenger, Captain America’s battle costume with its recognizable red, white, and blue colors flaunting the scooter. The number 41 is included into its graphics signifying the year (1941) he made his debut into Marvel comics with his signature shield seen on the front panel of the scooter. The words “Super Soldier” adorn the scooter’s side panels showcasing one of Stan Lee’s first superheroes of the Marvel universe. The TVS NTorq 125 is of course powered by a 124.88 cc fuel-injected single-cylinder engine that churns out 9 hp and 10.5 Nm of torque, which is just enough to get you around in style. The TVS Supersquad edition scooters were made to be hopefully more appealing to the younger generation of riders. However, at the moment, the special edition scooter is only available in India. It is priced at INR 77,865 or roughly about P51,000.  We bet if this scooter was made available here, it will surely make a killing for Marvel fans in the Philippines. Let’s just keep our fingers crossed that eventually, it makes its way to Philippine shores.