Two new colors have been announced and unveiled by Triumph global for the Tiger 900 GT and Rally trims. The update comes just in time for the 2023 model year of the brand’s adventure bikes and is set for availability by July 2022.

Triumph officially launches the Tiger 1200 in the Philippines starting at P1,460,000

The Tiger 900 platform can be specced as either a road-biased adventure bike or a capable off-roader. The model brought with it a new design along with Triumph’s 888cc inline triple with a T-plane crankshaft. The Tiger makes 95 hp and delivers its torque early, resulting in a bike that’s great on or off the road. The GT and the Rally trim come with a 21-inch front and a 17-inch rear. Keeping things fresh in the Tiger lineup, Triumph’s adding the Matte Sandstorm color option for the Triumph Tiger 900 Rally and Rally Pro models. Being an off-road-focused model, it sports a more rugged colorway, which is reminiscent of the Khaki green color we’re all probably familiar with at this point. The sand color is accented by black and white accents that populate the fairings and the fender of the bike, and it should mesh well with any tan-colored adventure gear that you might have. For road warriors, the Tiger 900 GT and GT Pros will get a new Caspian Blue colorway for the 2023 model year. With a more on-road setup, the GT variants of the Tiger 900 make do with cast wheels and road-biased tires which is a departure from the wire-spoked set found on the Rally and Rally Pro trims. 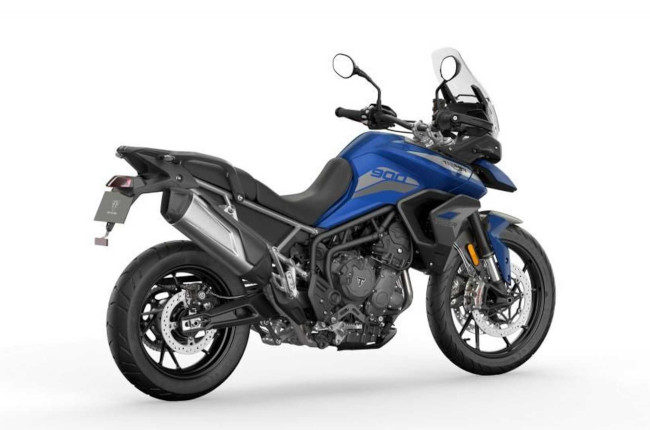 Again, these new colors will start seeing availability by July 2022, but Triumph Philippines hasn’t made any noise yet about new colors dropping in the local market for now.