With the Land Transportation Office (LTO) now beginning to implement the new Motor Vehicle Inspection System (MVIS) for the renewal of registration of cars and motorcycles, several guidelines are currently being implemented in order to determine the roadworthiness of a vehicle. Previously, we shared the LTO’s proposed 99 dB limit for vehicle exhaust systems. Granted, the loudness of a vehicle’s exhaust has always been a hotly debated topic—and will be so for as long as the combustion engine keeps firing away. One vital component of a vehicle, however, must always be in tip-top shape, no matter what you ride or drive: the tires. 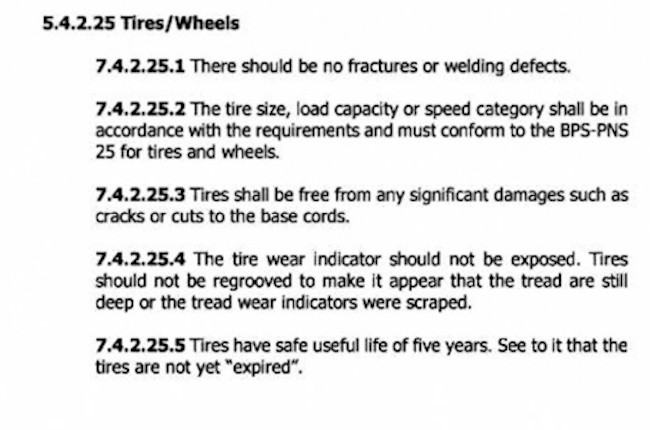 As we all know, the MVIS is being implemented with the safety of motorists as top priority. That being said, the motoring industry is being slapped with a lot of new regulations, as compared to the previously lax Private Emissions Testing Centers (PETC). With that, the LTO is proposing a 5-year age limit for tires in order to pass the MVIS inspection. Now, this seems pretty fair, given the fact that most tires have a shelf-life of 5 years. On top of that, most motorcycle riders who ride on a daily basis change their tires far more frequently than once in five years. For those who only ride occasionally, it’s important to check how old the tires on your motorcycle are, especially if you bought your bike used.

Checking the age of your motorcycle tires is relatively simple. Simply look for a series of markings on your tire. Usually, a 4-digit code can be found wherein the first 2 digits represent the week of the year, while the last 2 digits represent the year itself. So if your tire reads 1219, that means it was manufactured on the 12th week of 2019. That being said, motorcycles found to be wearing tires aged 5 years or older will automatically fail the inspection, and the owner will need to replace the tires with newer ones, and pay an additional P300 reinspection fee.