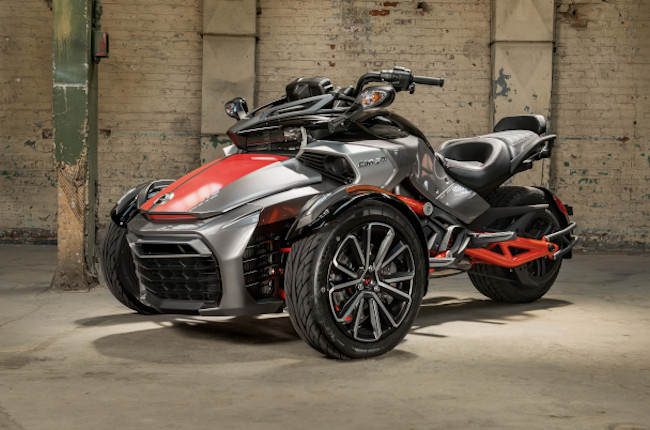 Up until recently, three-wheelers like the Piaggio Ape and the Bajaj RE occupied a gray area of the Land Transportation Office’s vehicle registration classification system. Officially registered as ‘motorcycle with sidecar’, these machines are in fact symmetrical three-wheelers, and do not make use of a sidecar whatsoever. The same story goes for Canadian high performance three-wheeler, CanAm.

In a recent circular issued by the LTO, the CanAm Spyder in particular, has been officially classified as a ‘three-wheel motorcycle’. Furthermore, it now falls under the ‘motorcycle without sidecar’ denomination. Now what does all this mean? Well, for starters, several local government units have implemented ordinances which place heavy restrictions on the roads which tricycles, or vehicles falling under the ‘motorcycle with sidecar’ denomination can pass through. So now that the CanAm Spyder is indeed a motorcycle without a sidecar, it should be granted passage to the same roads as those of standard two-wheelers. In spite of this development towards the modernization of vehicle classification by the LTO, the question of whether or not three-wheeled motorcycles like the CanAm Spyder can enter the expressway remains. It does, after all, come with a powerful 1,330cc engine. In 2018, the Court of Appeals affirmed its decision to retain the ban on three-wheelers from using the expressway. Granted, all this came before the modernization of the LTO’s vehicle classification system. That said, an amendment would have to be made to Department Order No. 2007-38 of the Toll Regulatory Board (TRB), which effectively bans motorcycles under 400cc and three-wheelers regardless of displacement from making use of the expressways.

Nonetheless, the modernization of the classification of machines like the CanAm Spyder is indeed a step in the right direction. After all, variety is the spice of life, and giving consumers more options when it comes to their vehicles of choice, will surely open many doors in the local industry.