The Honda CB400 Super Four has always been a favorite of motorcycle riders in the Philippines since the 90’s to early 2000s. During this time, considered one of the most sought after Universal Japanese Motorcycles, it could easily be spotted around the streets of Metro Manila with its unmistakably distinct exhaust note. During the early days of the custom scene in the country, the CB400 Super Four would be a perfect base bike for café racer modifications. And up to this day, despite the emergence and success of the neo-sports cafe line-up of Honda's CB650R and CB1000R, you could still see CB400 café racer style bikes roaming around Metro Manila. Old school still has its charm. Honda recently released a Special Limited Edition in Japan with a beautiful Metallic Silver color scheme with Matte Bronze accents on the wheels and engine. Powered by a 399cc liquid-cooled Hyper V-TEC engine, rated at 56 HP at 11,000 rpm and 39 NM of torque at 9,500 RPM. The DOHC 4-stroke engine is mated by a 6-speed gearbox. The fuel tank has a generous capacity of 18 liters and now comes standard with ABS twin Nissin disc brakes up front and single disc brake for the rear. 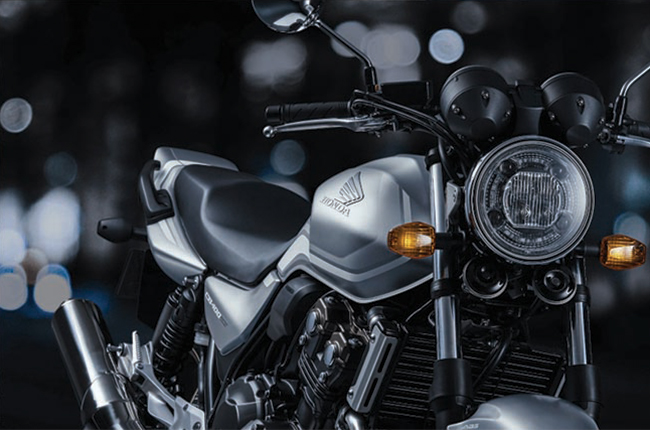 While not much has changed with the overall looks of this naked bike it still sports the iconic silhouette recognized by everyone, it is now equipped with updated round headlights with 4 x 4 EYES LED headlights (2 top and 2 lower) separating the position for high and low beams. The dual tachometer and speedometer dials with a digital odometer reading sit above the handlebars with the same look as the previous models. At a glance, you would see the similarities of styling cues with its bigger modern classic brother, the CB1100EX. The Honda CB400 Super Four’s ergonomics always gives you a comfortable upright riding position which makes it perfect for beginners who are looking to transition into their first big bike, but at the same time, still enjoyable even for more experienced riders. Its official price starts at about 918,400 yen. With Honda seeing great success with its Neo-Sports Café line up of bikes, we could only hope that the new CB400 Super Four would also make its way to Philippine shores.