KTM has launched its new 2020 1290 Super Duke R, and it’s one of the fastest streetfighters out on the market today. The 1290 Super Duke R is, said to be the latest evolution of The Beast, the ultimate naked bike by Adriaan Sinke, head of product development of KTM – so much that they decided to aptly call it The Beast 3.0. The bike was first introduced at an unveiling for a select number of members of the international press at the infamous Autodromo Internacional do Algarve racetrack in Portugal. It is considered as the bigger sibling of the 890 Duke “Super Scalpel” and the 390 Duke “Corner Rocket”. 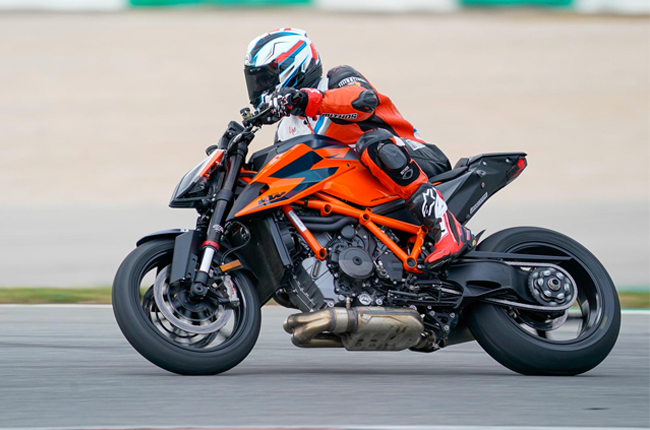 The 1290 Super Duke R is powered by a 1,301 cc, liquid-cooled 75° V-twin capable of churning out an impressive 179 hp and 140 Nm of torque making it one of the most powerful naked bikes ever produced. It is mated to a six-speed manual transmission with a slipper clutch and ride-by-wire throttle. Its power plant can accelerate to 200 km/h in just 7.2 seconds and with those figures, it can easily go head to head with a Bugatti Veyron Grand Sport in a drag race and smoke it. It also features a new frame design made out of Chromium-Molybdenum trellis-made steel which uses the engine as a means to increase torsional rigidity, giving it more structural integrity and making it much stiffer than its predecessor. Its swingarm has been repositioned to a little bit higher in relation to the output sprocket for more control with power delivery. All of this coupled with performance WP suspension allows the bike to cut through the track like a hot knife on butter.

Its electronics now provide more feedback from the engine with less intrusiveness from the safety systems. The 1290 Super Duke R’s electronics system now includes an optional Track Mode with 9-levels of Bosch traction control, cornering ABS and anti-wheelie functionality that can also be configured according to the rider’s preference. It is equipped with a new and improved TFT screen with a revamped and more user-friendly switchgear.

While there’s no doubt that ACPI, the exclusive distributor of KTM motorcycles in the country, would be bringing in the new 1290 Duke R to their showrooms, delays in shipment should be expected to be brought about by the COVID-19 pandemic. Nonetheless, we can all sit patiently and wait until the arrival of The Beast 3.0, as it’s only just a matter of time.