However, for those lucky few who get to own the motorcycle, besides the limited edition number, each owner would also get an engraved Montana Silversmith badge and a custom Montana Silversmith belt buckle engraved with the motorcycle number, VIN, and owner’s name on it. The Roadmaster Dark Horse Jack Daniels motorcycle features a nice two-tone Whiskey Pearl paint scheme with an Oakwood ceramic engine finish. The seat, tank, and floorboards would have ‘Gentleman Jack’ engravings on them, representing its Jack Daniel’s premium Tennessee whiskey branding. Among its other features, the bike  also comes with exclusive equipment including a Pathfinder Adaptive LED headlight with Pathfinder S LED Driving Lights, a 600-watt PowerBand audio system, some heated grips, a ClimaCommand Rogue heated and cooled seat, and adjustable Klock Werks windscreen, and remote locking saddlebags and trunk. 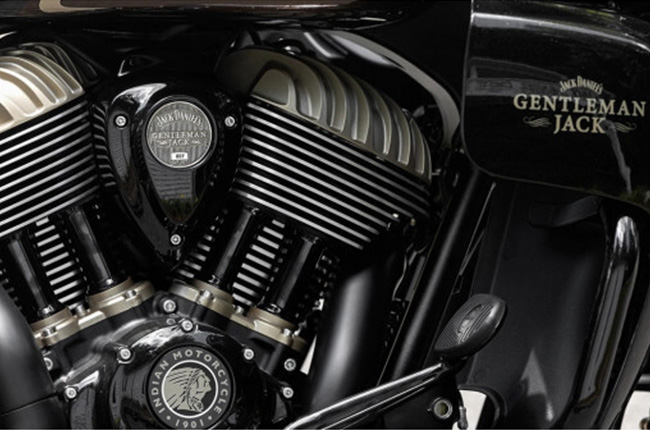 Of course, the Indian Roadmaster Jack Daniel’s edition is powered by a massive 1.9-liter V-twin engine capable of producing 168 Nm of torque. It is mated to a 6-speed manual transmission with a belt-driven rear wheel. It has a fuel capacity of 20 liters making sure it can go the distance and feed its massive engine. Stopping duties are provided by twin 4-piston calipers in front and a dual-piston caliper in the rear with standard ABS. Considering the bike tips the scales at 394 kg, its braking system is powerful enough to bring it to a stop.

Because of the customization process that the bike needs to go through and its limited run, the bikes are pre-ordered and the units will be expected to be delivered by September this year. It is priced at $38,999 or P1,895,000 if you have plans of owning one.