On the other side of the globe, as the season shifts from summer to fall, a slew of new motorcycle machinery coincides with what would have been every major motorcycle brand’s preparation to showcase them at the EICMA motorcycle show. Ordinarily, most motorcycle brands would take advantage of the large crowd drawn to unveil its latest motorcycle offerings, but with the global pandemic, these are now extraordinary times. Ducati on the other hand always veered away from doing big reveals on the show floor in favor of global online presentation of facelifts, new trims, and new additions to its model lineup. Nowadays, manufacturers are forced to be more creative in showcasing their new-for-2021 releases on their own platforms. 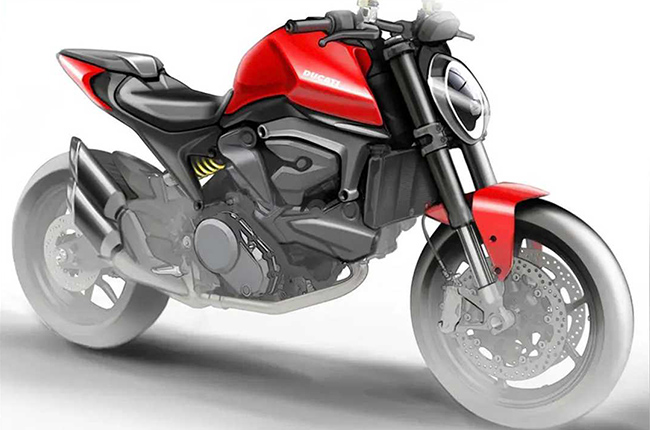 Sketches of what appeared to be a very convincing presentation of what the new Ducati Monster 821 could look like for 2021 have been making rounds online. While these sketches haven’t been verified by Ducati, the well-circulated images practically confirm spy shots taken from a few months back have been fueling a lot of speculation of the Monster’s direction in terms of design. One of the biggest changes was the absence of its iconic exposed trellis frame that Monsters are known for.

When the Ducati Monster was first released back in 1993, it practically saved the company from bankruptcy and changed the way people looked at the Italian brand for decades to come. Its beautiful exposed tubular steel chassis has been the Monster’s distinguishing feature that made it an iconic naked bike that shaped the market for years to come. Yet, it comes with a caveat. Sticking to a trellis frame didn’t bode well with making the bike lighter.

Here’s where Ducati finds itself in quite a pickle, are they willing to ditch the Monster’s distinctive design element to deliver better handling or stability? Will that turn faithful fans of the Monster away, or will it attract new customers? Competition in the middleweight naked segment is starting to get fierce and crowded with the likes of the BMW F 900 R, Yamaha MT-09, and KTM 890 Duke gaining a lot of traction. Ducati might have shaped the naked market for the past 27 years and now, it seems like the market is starting to shape the Monster’s new design.

While specific details from Ducati still remain scarce at the moment, we’re yet to find out if or when the 2021 Ducati World Premiere finally happens. Yet we can expect the all-new Ducati Monster 821 together with the much-anticipated Ducati Multistrada V4 to take center stage.