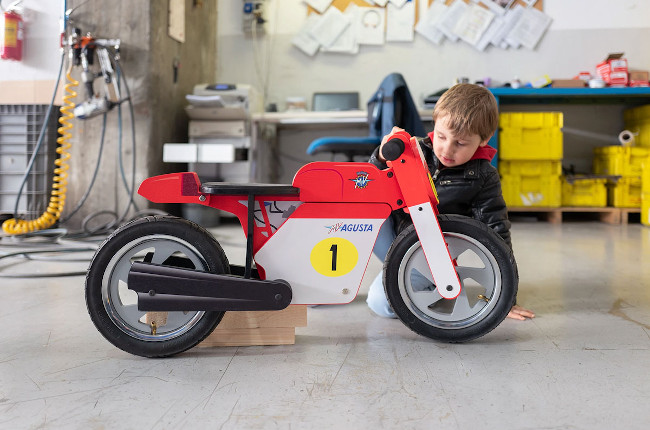 For many of us, a rickety old bicycle fitted with training wheels was our first venture into the two-wheeled lifestyle. We’d ride this simplistic contraption for a number of months, or even years, until such time we were confident enough to independently ride on two wheels. Today, the advent of the balance bike enables youngsters to develop their bike-riding skills at an even faster pace.

A balance bike is basically a bicycle without pedals. Instead, kids can firmly plant their feet on the ground, while running with the balance bike between their legs. They can then lift their legs up while gaining some speed, providing them a semblance of balancing on two wheels. Now, balance bikes come in loads of different shapes, sizes, and styles. But perhaps the most beautiful balance bike to ever grace the pavement comes from legendary Italianmotorcycle maker, MV Agusta. 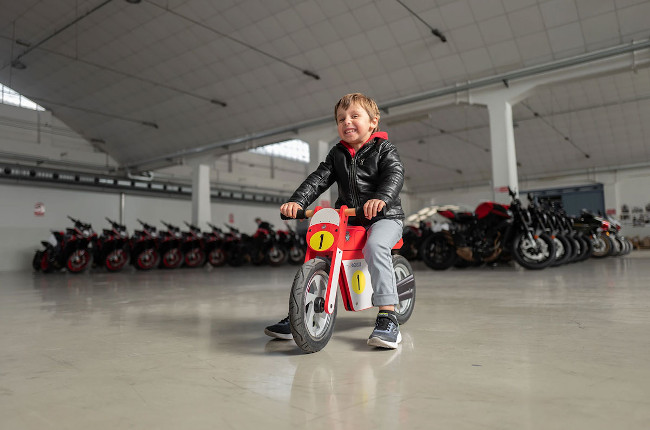 When you hear the name MV Agusta, high-performance machines such as the F3 or the Brutale 1000 come to mind. However, the iconic Italian motorcycle manufacturer has recently launched the Vintage Wooden Balance Bike—a machine meant to build loyalty towards MV Agusta at an early age, and of course, to teach kids the basics of riding on two wheels in a fun and safe way.

Now the MV Agusta Vintage Wooden Balance Bike is probably the most affordable two-wheeled vehicle in the company’s arsenal at just $198, or the equivalent of P9,504. It boasts the unmistakable MV Agusta red and silver colorway, the same one Giacomo Agostini’s race bike was wearing back in the day. This particular Gran Prix racer won MV Agusta multiple world titles, propelling the company into the international motorsports hall of fame.

The MV Agusta Vintage Wooden Balance Bike has been made in compliance with all European toy safety standards and is suitable for kids aged 18 months to 5 years.