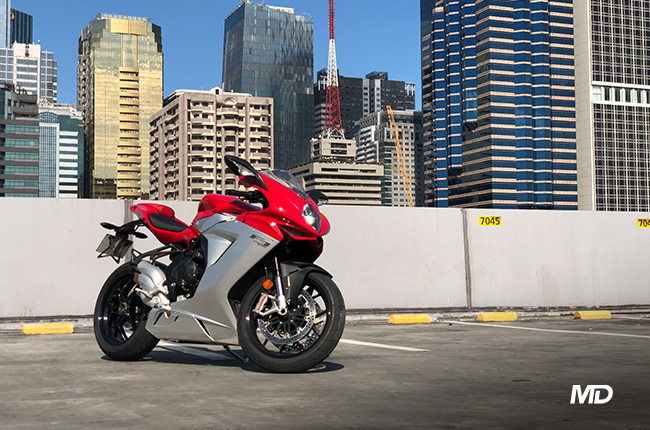 When it comes to high-end, high-performance, and purpose-driven motorcycles, few companies have machines as eye-catching as MV Agusta. However, just because MV Agusta’s bikes look drop-dead-gorgeous, don’t be led to believe that they’re lacking in the performance department. As it would turn out, the company’s tagline, “Motorcycle Art,” goes so much deeper than just aesthetics.

Founded in 1945, Meccanica Verghera Agusta, or MV Agusta as it’s known today, started out producing 125cc motorcycles in Milan, Italy. Similar to the Ferrari family, the Agusta family, in particular, Count Domenico Agusta, was passionate about motorcycle racing, and sold lightweight street motorcycles solely to fund their racing programs. Fast forward a couple of decades, and MV Agusta had propelled itself into racing fame. With multiple wins across multiple racing series, the Italian manufacturer became synonymous to motorsports success.

Over the years, MV Agusta’s motorcycles have evolved into some of the most high-performance machines out there. Although not as famous as mainstream brands such as Ducati, and more recently the Japanese big four, there’s no denying that one of Italy’s most legendary motorcycle manufacturers continues to boast some of the most technologically advanced bikes in the market today. One such bike would be none other than the MV Agusta F3 675. Luckily for us, Motostrada so kindly lent us the F3 675 for a couple of days, to let us run it through its paces. Here are the 5 things we love the most about this cutting-edge supersport. The MV Agusta F3 is undoubtedly one of the class-leading bikes in the 600 supersport segment. Unlike its main competitors which feature standard inline-four cylinder engines, the MV Agusta F3 675 features an inline-three cylinder engine with 675cc of displacement. Equipped with ultra high-tech internals, this engine churns out an impressive 126 horsepower at a sky-high 14,400 rpm. As far as torque is concerned, this high-performance triple pumps out 71 Nm at 10,600 rpm.

The 675cc three-cylinder engine found in the MV Agusta F3 is considered as the most powerful and technologically advanced middleweight engine ever produced. Now, it goes without saying that this bike is by no means a beginner-friendly machine. It’ll have you going well over the speed limit in first gear, and has a top speed limited to 258 kilometers per hour. As is the case with all supersport bikes, the MV Agusta F3 features extremely committed ergonomics. This means that you’ll be sitting hunched over with your chest close to the tank, and most of your upper body weight on your wrists. This is just the nature of sportbikes, however, the MV Agusta takes this a step further with aggressive rear-set footpegs, and a rather tall seat height of 32 inches. The ergonomics alone translate to a bike that’s conducive to extremely sharp handling. However, MV Agusta didn’t stop with the ergonomics. The F3’s chassis is constructed out of lightweight steel and aluminum components which make use of the engine as a stressed member. This significantly increases rigidity, while reducing weight in the process.

To complement the robust and lightweight chassis, MV Agusta has fitted a fully adjustable 43mm inverted Marzocchi fork. Featuring rebound, preload, and compression adjustability, the suspension can be precisely dialed-in for specific track conditions, as well as the rider’s preference for street use. Rear suspension duties are handled by a mono-shock which features similar levels of adjustability. If you’re not yet impressed with the MV Agusta F3 675’s stellar engine performance and ground-breaking chassis and suspension components, then you’d be glad to know that this bike is indeed one of the most technologically advanced middleweight sportbikes out there. In fact, the MV Agusta F3 boasts the most sophisticated electronic engine control system in its class. Equipped with a 6-axis inertial measurement unit (IMU), the bike’s engine control unit (ECU) is able to keep track of a multitude of information ranging from pitch, yaw, lean angle, speed, throttle input, and many more. All this information is then processed to provide the most seamless cornering ABS and traction control system in the market.

MV Agusta has done such a great job dialing in the bike’s electronics that you hardly even feel the cornering ABS and traction control kicking in. It does so in such a way that feels seamless, and keeps the ride engaging and exhilarating, yet safe at the same time. The bike’s advanced on-board electronics can also be toggled to suit the rider’s preferences. The bike comes with 4 engine maps to choose from, as well as an additional map for custom settings. Also, the rider has the option to choose from a total of 8 levels of traction control. Perhaps one of the most exhilarating features of the bike is the bidirectional quick-shifter which allows the rider to shift gears seamlessly without letting off the throttle, or engaging the clutch. Equipped with an auto-blip function, the quick-shifter system automatically rev-matches the engine while downshifting, further contributing to a smoother ride.

It's beautiful from any angle Departing from all the nitty gritty details of the MV Agusta F3, another thing it has going for it is definitely its looks. Even non-motorcycle enthusiasts would be able to tell that this bike is indeed very special just by looking at it. Employing smooth, yet aggressive lines, the F3’s bodywork is unmistakably supersport bike material. The particular bike we got as a tester came in a gorgeous red and silver colorway—the same iconic colors MV Agusta has become so famous for, over the years.

The MV Agusta F3 is one of those motorcycles which, as you take more time to appreciate the details, you realize that so much attention has gone into its design. The perfect marriage between art and engineering, the F3’s components have been designed to maximize performance and reduce weight. For instance, the single-sided swingarm not only looks good, but also keeps the weight down, while improving suspension compliance and rear-end rigidity. Additionally, the triple-exit exhaust system nods at the bike’s centerpiece: its roaring three-cylinder engine. 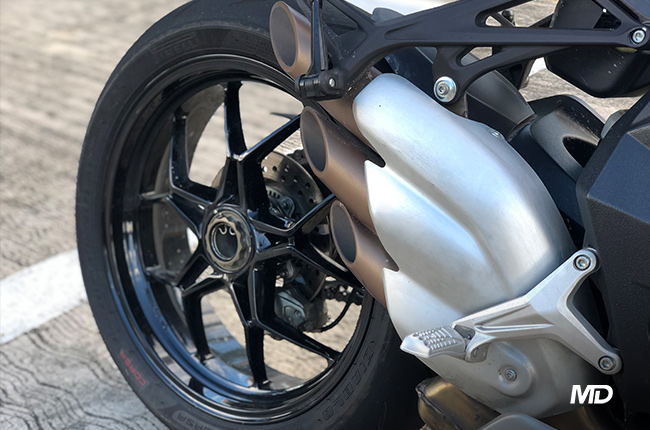 Speaking of the exhaust, the MV Agusta F3 675 sounds absolutely amazing. Similar to that of other three-cylinder engines, the F3 makes all the sounds any motorsports-crazy enthusiast would dream of. Revving all the way up to 15,000 RPM, the engine sings its song like the howl of a banshee, turning heads everywhere it goes. On top of the high-pitched exhaust note that’s smooth as silk, the bike makes an aggressive induction sound under heavy acceleration, further adding to the exhilarating, adrenaline-pumping nature of this beast.

Overall, the MV Agusta F3 675 is a pure-bred, no frills, supersport bike. Not meant for commuting, touring, or anything in between, this machine lives for one thing, and one thing alone: to go fast. That being said, this bike will put you into a lot of trouble if you’re an inexperienced rider. However, if you’re one with quite an extensive riding background, and want a machine which you can maximize on the track, then the MV Agusta F3 675, with its neck-breaking power and revolutionary technology, is indeed the right bike for you. Available in the local market under Motostrade, this bike comes with a sticker price of P1.1 million.