Among all the Italian motorcycles that are available in the country, MV Agusta motorcycles are among those that surprisingly, not a lot of people are too familiar with yet. After all, the brand’s golden years in racing happened during the 1970s. After seeing the MV Agusta Brutale 800 for the very first time, it was not difficult to see why. One look at the bike in the metal and you’ll understand why MV Agusta motorcycles are truly called ‘Motorcycle Art’. The very first Brutale that came out in 2001 was designed by the legendary Massimo Tamborini who can be credited for influencing the designs of most of the modern Italian motorcycles we know today. The current generation Brutale still carries the same signature design cues that Tamborini brought. For instance, the Brutale’s headlight was meant to have the same shape as that of a Porsche Carrera 4 996, a car that caught Tamborini’s eye from his rearview mirror while he was driving towards their headquarters in Lake Varese, Italy. The Brutale’s silhouette looks more massive from the front of the bike. Particularly, air intakes strategically positioned in front of its tank gives it a more brutish look, but still narrows down as its lines flow towards the middle of the bike. The Brutale has sharp angles in the right places, but also subtle curves to tone down its otherwise aggressive character. Its triple cutaway exhaust would also make you think twice about trying to replace it with an aftermarket unit without destroying its overall look. It just blends together seamlessly with the bike’s single-sided swingarm. Its tail section is devoid of any clutter. Its plate number assembly sits right above the rear wheel with the tail light giving a nice red glow over the rear wheel as you ride towards dusk. Sitting in the Brutale’s trellis frame is a 798 cc triple-cylinder four-stroke engine that’s capable of churning out 110 hp at 11,500 RPM and 84 Nm of peak torque at 7,600 RPM with a counter-rotating crankshaft. For a middleweight naked, it has plenty of power that’s capable of reaching top speeds of up to 237 km/h. In a flick of the wrist, its quick and intuitive engine allows you to hit a speed of 100 km/h in just 3.8 seconds. However, the Brutale has a rather crunchy feel with its gearbox which made it a little bit trickier trying to find neutral at first, but after spending a little more time with the bike, you’ll eventually get the hang of it. The slipper clutch has a rather heavy squeeze to it which could be a bit of a burden in stop and go traffic situations around the city. That being said, MV Agusta is known to have a knack of blending the latest technology derived from both F1 and it’s MotoGP races. The bike’s quickshifter does more than enough in making up for its “crunchiness” and clutch squeeze especially when accelerating at high speeds. Clutchless shifting is done with ease  It gives out a distinct exhaust note reminiscent of the glory days of F1 races when Michael Schumacher and Juan Pablo Montoya battled furiously on the track back in the early 2000s. Stopping duties are provided for by a pair of 320 mm Brembo discs up front with four-piston calipers and a 200 mm single rear disc with a two-piston caliper at the rear. The responsiveness of the brakes is right for the job in taming the Brutale considering the amount of power the bike’s 798 cc triple engine gives you. 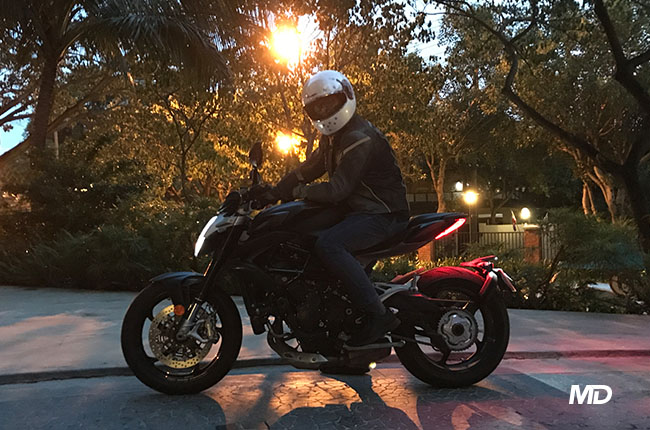 As a naked streetfighter, the Brutale still has an aggressive forward-swept stance, but not so much as to strain your wrists and back so much as traditional sportbikes with clip-ons. The handlebars are considerably wider than expected yet it still has a wide turning radius which makes it a little bit trickier to do U-turns. Nevertheless, considering its Brutish appearance, its weight was more manageable than expected. The Brutale looks bigger than it actually is and once you get the hang of riding it, its flickable power easily gets you out of tight situations. The Brutale’s suspension system is fitted with premium 43 mm Marzocchi inverted forks up front and a Sachs monoshock set up at the rear that are both fully adjustable. However, they have a rather stiff feel when riding over the less than perfect Metro Manila roads. It doesn’t help that it’s floating seat design is better to look at than sit on. It could maybe use a little bit more padding, but to do so would, of course, ruin the look of the Brutale’s overall aesthetic. In this department, MV Agusta really put more effort into its design rather than comfort. The side of the saddle is also a bit sharp, and if you spend a lot of time in traffic with your feet on the ground, you may feel a bit of pain on the inside of your thighs, but hey, you’ll look damn good doing it.

As a premier Italian motorcycle, MV Agusta didn’t scrimp on technology and safety that they could possibly throw at the bike. The Brutale comes with four selectable riding modes to suit your style of riding and situation called for namely — Normal, Sport, Rain, and Custom. It also comes with eight traction control levels which also mitigates the engine’s tendency to wheelie, and Bosch 9 Plus ABS with 3 levels and Rear wheel Lift-up Mitigation (RLM) which act accordingly especially when you aggressively hit the brakes in those unpredictable situations. The rear Brembo disc brakes need a harder squeeze to get the responsiveness you’re looking for when trying to slow down but the dual discs up front do an excellent job in slowing down and stopping the bike. 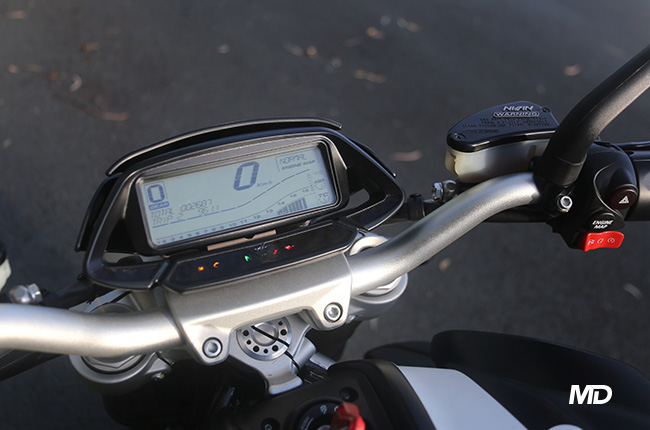 It comes with daytime running lights to keep you visible on the road with a full LED set up to illuminate the road ahead when riding at night. Sadly, you do get a halogen headlight, which will do the job, but we feel that it is a wasted opportunity. Another qualm that we have with the Brutale is its less than stellar gauge cluster. It displays your tachometer, speed, riding modes, temperature, and your gear position among other things, but is lacking one important thing, your fuel level. At least you have a low fuel light. As a naked streetfighter with an aggressive character, it’s brutish size tapers down from the tank towards the tail which in reality, kind of tames down its intimidating character. While it has flickable power, traveling at cruising speed makes you forget how big and powerful the Brutale actually is. On the highway, it feels comfortable getting up to your desired speed to keep up with everyone else as its engine has more than enough power to get there. The lack of a windscreen could really make you feel the wind pound against your chest at high speeds and all the small debris flying towards you but that comes as a characteristic of naked bikes. All in all, while it has more than enough power and a tank large enough to give you some decent range for long rides, the lack of a functioning fuel gauge could make you think twice about long-distance touring. In addition, its lack of provisions for accommodating additional luggage on the tail section can also be discouraging. However, if you take it as a ride around the city, its size can still allow you to squeeze through tight spaces in traffic situations despite the wide turning radius. The MV Agusta Brutale 800 may not come with the conveniences of attaching your luggage, a charging port, or Bluetooth connectivity that other bikes might offer. However, what it lacks in those conveniences, it makes up for character — and a whole lot of it. When we drove the Brutale and made a stop in Nuvali, a group of mountain bikers driving around the area asked if they could have a group photo of us with them and the bikes we brought. To them, it was such a rare sight to see an Italian motorcycle in the metal as good looking as an MV Agusta. After spending more than enough time to get to know the bike, it was hard to let it go when we had to return it to the dealership.