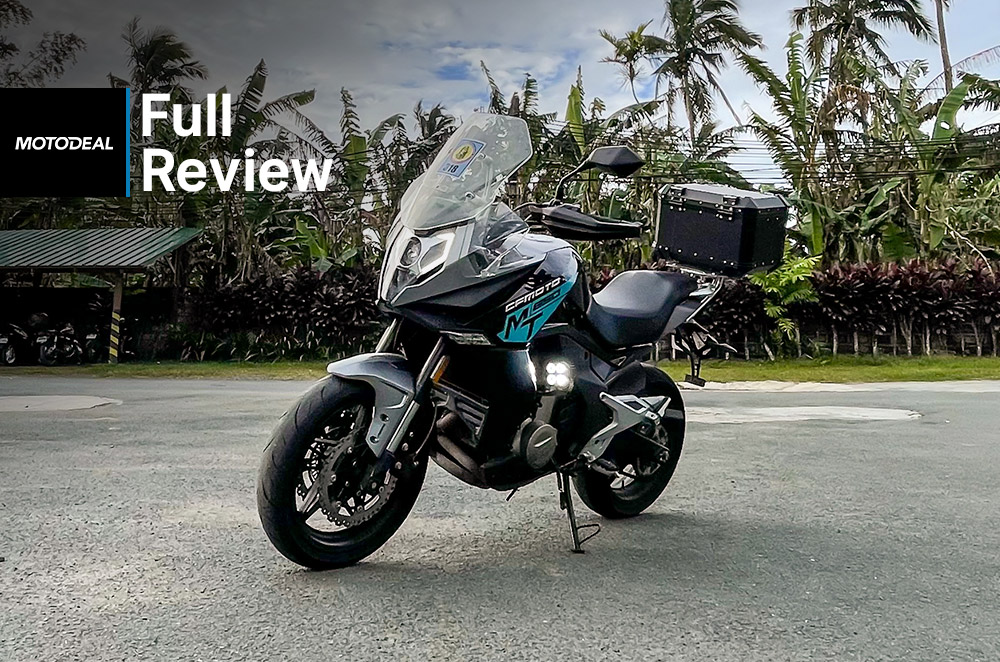 With global motorcycle production being scaled quite drastically over the past few years, a variety of motorcycle brands and models are becoming a lot more accessible to new and experienced riders alike from all around the world. Over the past few years, CFMoto has surely left an impression on the local market. In fact, CFMoto quickly became Motodeal.com.ph’s most popular motorcycle manufacturer over the year 2020. We’ve already covered a few of CFMoto’s motorcycles in the past, namely the 650 NK, the 400 GT, and the 650 GT, and we absolutely loved these motorcycles for a number of reasons. To complete our take on CFMoto’s 650cc series of motorcycles, we wanted to find out what all the talk was about on the CFMoto 650 MT.

Over the past few weeks, we’ve had a fair amount of time on the saddle of a 2019 CFMoto 650 MT. When we first picked up the motorcycle from the Motostrada dealership, we instantly realized that this motorcycle was most definitely a bonafide “big bike” – in engine displacement, in physical size, and in road presence. The allure of this adventure tourer piqued our curiosity, and motivated us to find out exactly what all the hype around CFMoto is about (spoiler alert: if you’re in the market for a 650cc adventure touring motorcycle, you’re definitely getting a lot of bike for the price). Without further ado, here is our review on the 2019 CFMoto 650 MT. 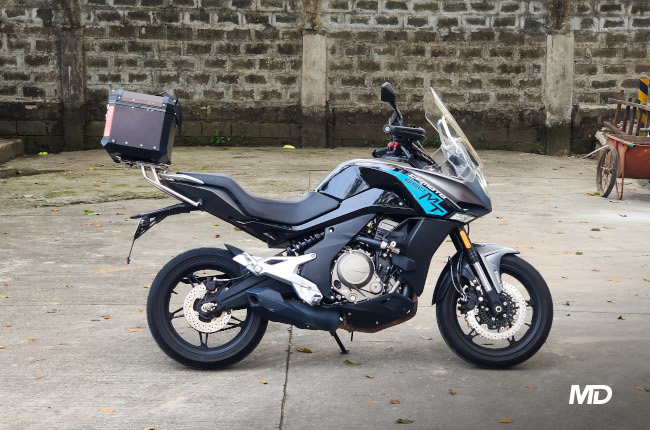 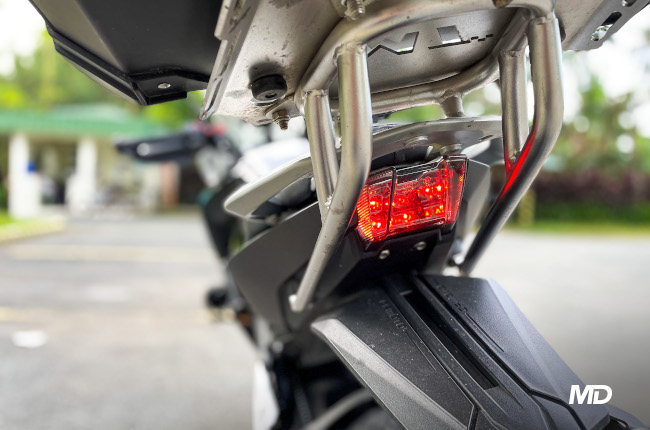 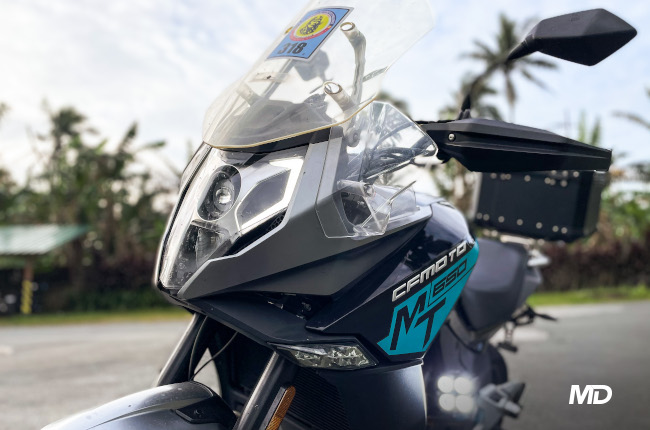 When the CFMoto 650 MT was first presented to us at the dealership, we couldn’t help but admire the size and heft of the motorcycle. The 650 MT can establish quite a fair amount of presence when parked or on the road, and can initially look quite intimidating. The large 18L fuel tank is paired with a sizable set of plastic fairings. The nose and headlight components are tall and wide. The handlebar sits quite tall due to the long travel suspension and ergonomic design, and the wheelbase is a lengthy 1415mm, which has the added benefit of stability at higher speeds. Despite the relatively large scale of this motorcycle, the seat height is actually quite friendly and approachable at 840mm – just 25mm higher than the 650 NK naked bike. The seat was also quite comfortable, boasting a wide surface area for your bottom. Overall, we were quite impressed with the overall design and ergonomic package of the motorcycle, and we quickly became excited to take out the 650 MT for a spin.

Can we expect the CFMoto 800 MT to roll out soon? 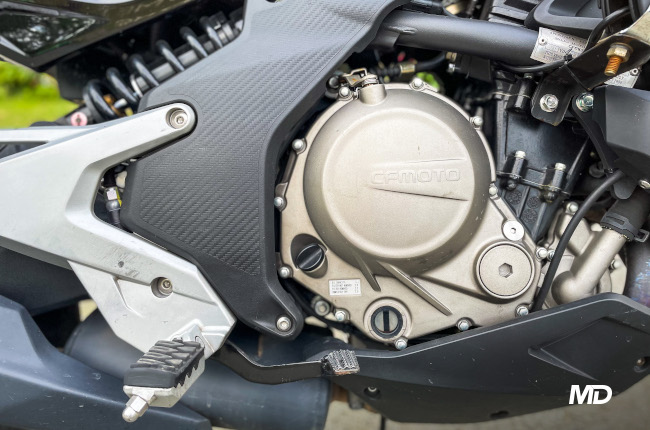 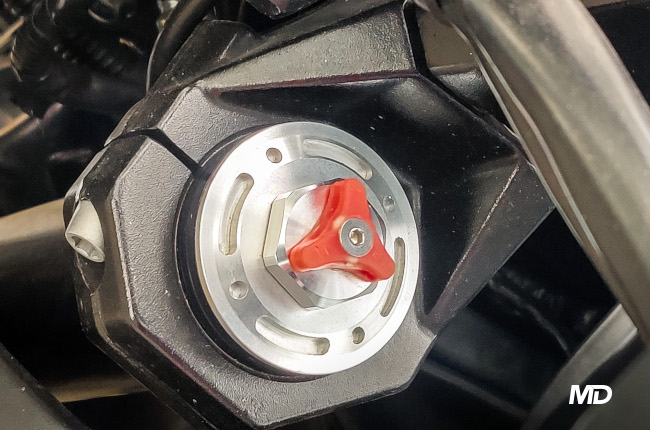 The 650 MT rolls off the showroom floor with a 649cc parallel-twin powerplant, sending 71 horsepower and 62 nm of torque to the rear wheel through a 6-speed manual transmission. After a few rides on this bike, we’ve found a good few enjoyable things about the powertrain. While the power figures speak for themselves, power delivery is what makes this bike shine.

Power kicks in at around 5000 rpm and peaks at about 9000 rpm, which makes it a very usable motorcycle to ride through a variety of conditions. The transmission admittedly has a bit of a long throw, but after getting used to it, you will find that every shift feels sure of itself and gets you properly into gear. The gear ratios are adequately spaced for mixed-use riding, and the clutch lever pull was surprisingly soft and made commuting duties a lot easier.

Suspension on the 650 MT comes standard with compression and rebound dampening adjustable fork set and a preload-adjustable rear shock with an added rebound adjuster. Riders can easily tune the motorcycle’s handling characteristics to fit one’s desired ride and can be easily adjusted to accommodate the extra weight of a passenger or heavy luggage. Through corners, the suspension is admittedly nothing to write home about – it does the job, but can afford to be a bit more firm for more aggressive riders. On straight roads, however, the suspension carries the MT’s weight like a champ, feeling plush and comfortable on highways, provincial roads, and city roads. 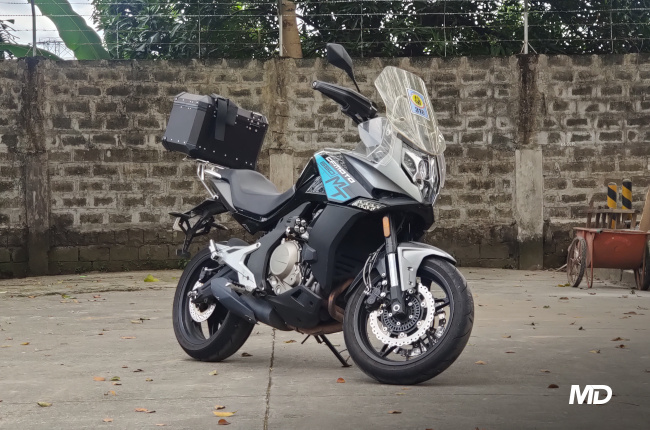 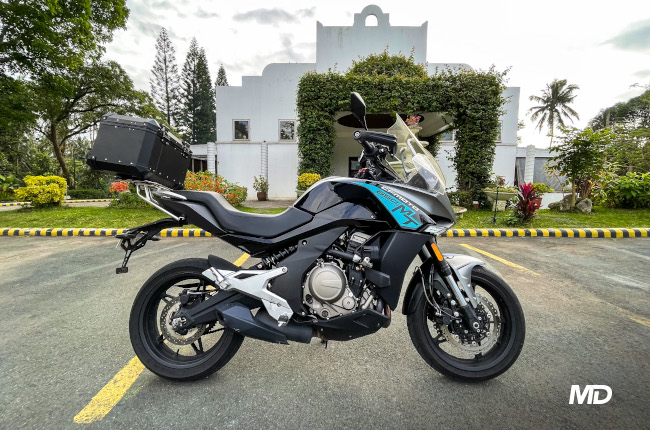 Multiple rides through various riding conditions proved that the 650 MT was a lot more comfortable than we expected. The seat and rider triangle of the bike is generally what creates this pleasant riding experience. The seat is wide and comfortable for both the rider and passenger. The seat to peg ratio of the 650 MT allows riders to feel loose and comfortable during long hours on the road, and the seat to handlebar ratio allows for that optimal upright and relaxed seating position for short and long rides alike. The only comfort drawback of the 650 MT would be its windshield, which does its job so well that city commutes can sometimes feel deprived of cool blast of wind. On the highway however, the windshield does a fantastic job which aids in preventing rider fatigue, especially when cruising at three-digit speeds for hours on end. 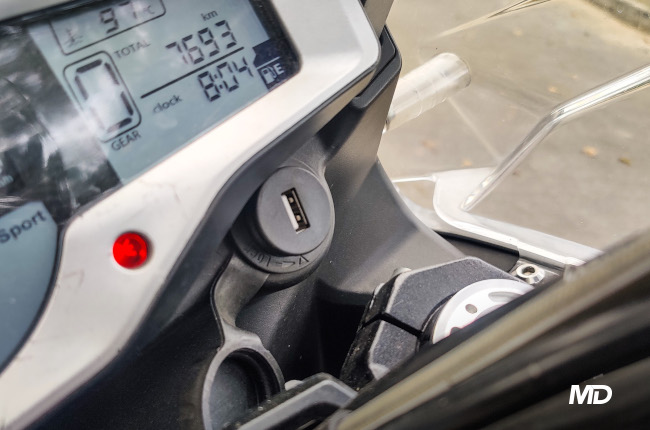 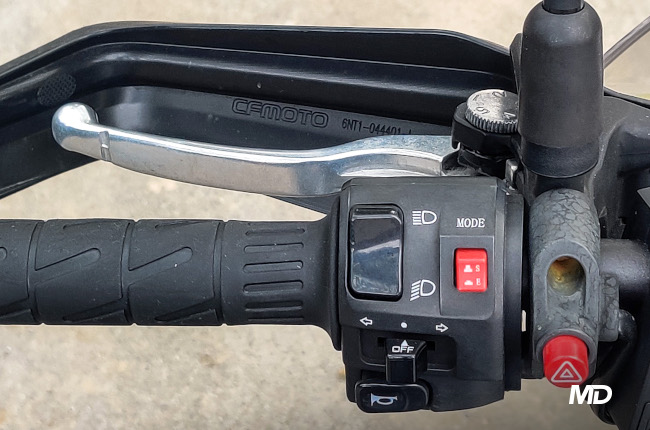 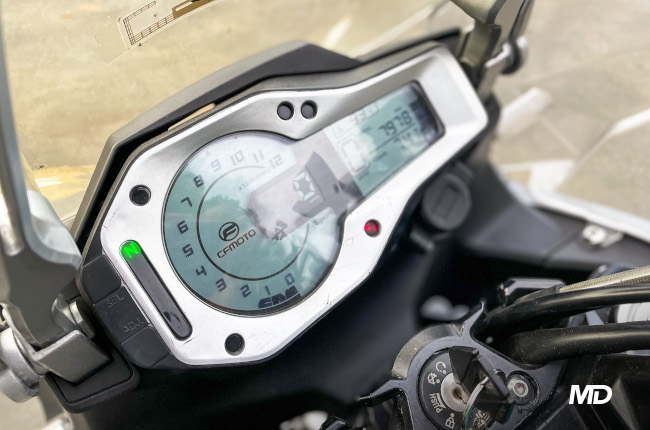 The 650 MT features quite a variety of components that may come useful to many riders. The LED headlight system allows riders to switch between an off, a park light setting, regular low beams, and a high beam setting with a pass switch. The motorcycle also comes standard with an ABS system and is paired with a dual disc brake system upfront, and a single disc system at the rear.

Riders will be happy to find the USB port right below the gauge cluster, which will surely come in handy for longer rides out of town. The handlebar, controls, and switches did not feel clunky and felt sure of itself at every click. The cluster was a simple digital gauge which displayed all of the most important information to the rider. The adjustable windshield is also very effective in keeping wind blasts away from the rider, which was very useful for our rides up cold mountain roads and our short blasts through the highways. Overall, the 650 MT is adequately equipped to provide riders with an enjoyable and safe time on the road. 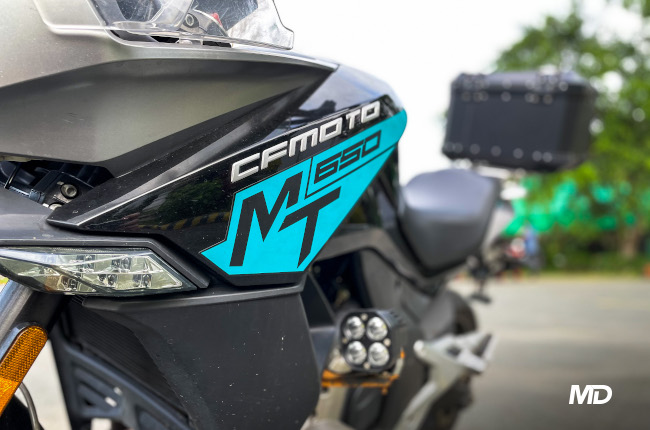 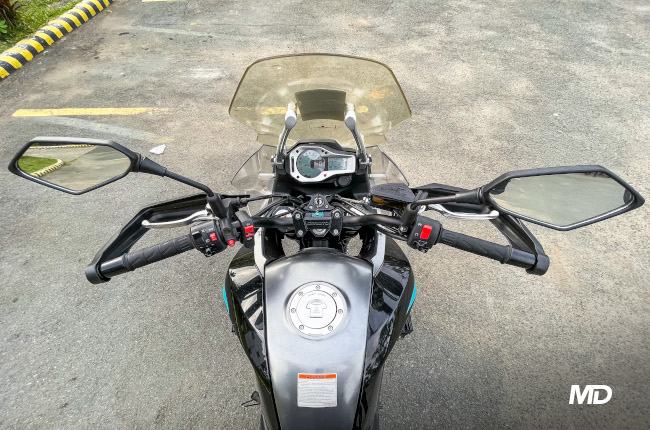 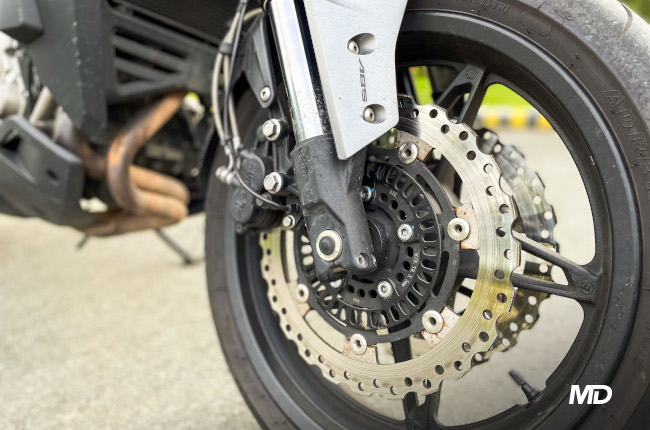 After about 30 minutes on the saddle, taking this adventure tourer around town was a lot easier than we initially thought. While the weight of the 650 MT seems to sit a tad bit high, maneuvering 213kg around town was made relatively easy due to the 17-inch road tires front and rear, and the adequately sized handlebar which grants the rider a lot of leverage. Filtering through traffic was also pretty easy given our initial expectations. The motorcycle looks a lot larger than it actually is – which is great for establishing a solid road presence while maintaining practicality for short commutes. However, the weight is something to get used to if you're not well-versed with bigger bikes, and the center of gravity is a bit high. Users about 5-foot-7-inches to 6-feet tall will find the 650 MT a good fit. 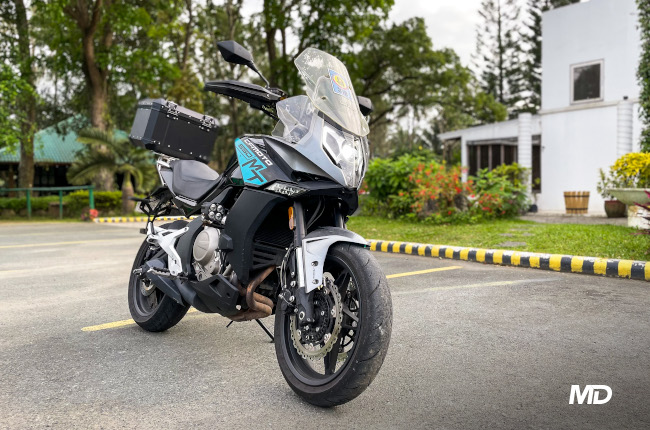 For just P335,000, you sure are getting a lot of motorcycle for the price. The 650 MT is in a very advantageous spot in the market, costing P100,000 to P200,000 less than its rivals from Japan and Europe, and still comes equipped with a competitive powertrain and componentry. CFMoto has also gathered a reputation of having a very well-equipped service center with trained personnel, therefore regular service should be no problem to most riders. At the end of the day, the 650 MT is a feature-packed motorcycle that is built to satisfy any adventure touring craving with ease – it’s hard to go wrong with the CFMoto 650 MT.