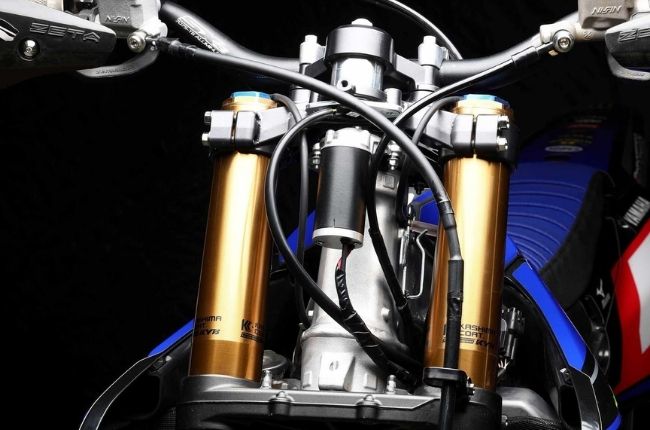 Power steering has been a mainstay of passenger cars for decades now, with both hydraulic and electric power steering (EPS) systems emerging as standard features. While it's a must-have for four-wheelers, EPS hasn't crossed over to the motorcycling world—until now, that is.

Yamaha Motor has announced its development of an EPS system for motorcycles. Prototype versions will debut on Yamaha's work racebikes at the 2022 All-Japan Motocross Championship, giving the brand a viable stage to test its newest riding aid technology.

So, how does Yamaha's EPS work? A magnetostrictive torque sensor that measures steering input sends data to a control board, after which an electronic actuator attached to the steering stem provides steering assistance.

According to Yamaha, its prototype EPS for motocross will most often engage at lower speeds where a rider typically needs it most. As the rider speeds up, the EPS system would engage less and essentially function as a steering damper. The system can also differentiate between rider inputs and outside forces, making it an intelligent system that could compensate for bumps in the road and other obstacles.

If the EPS system proves successful in motocross applications, Yamaha could apply the technology to a wide range of motorcycles. It would require many models to undergo a complete redesign, but it shouldn't be that challenging a leap for Yamaha. The system is lightweight, compact, and can realistically integrate with many next-generation rider-assist features like radar-based cruise control.

It could be years before we see a production-spec Yamaha model come equipped with EPS, and it would likely begin with a superbike like the YZF-R1. The technology is still in its infancy and will require research, development, and intensive testing. One thing's clear: electric power steering could revolutionize how we think about and use motorcycles both in competition and daily use.