French motorcycle manufacturer DAB Motors has made quite a name for itself in the European market thanks to its beautiful custom creations. The company employs a skilled team of engineers, designers, and craftsmen, and builds all of its creations by hand. Just recently, the company has begun dabbling into electric motorcycles, and seeks to revolutionize the future of two-wheeled mobility by offering a sustainable, albeit equally enjoyable alternative to the good old gas-powered motorcycle.

While electric motorcycles certainly hold the key to the future, there’s no denying that most of the electric two-wheelers currently available in the market leave quite a lot to be desired—both in terms of styling and outright performance. That being said, DAB Motors wants to offer a sporty and aggressively styled urban runabout with performance capable of delivering excitement in and out of the city. Dubbed the Concept-E, DAB Motors’ creation is truly a premium bit of kit. For starters, we can clearly see that the bike has been inspired by the sporty styling found in lightweight motards. Its long-travel suspension and narrow chassis certainly make for a fun and engaging ride. 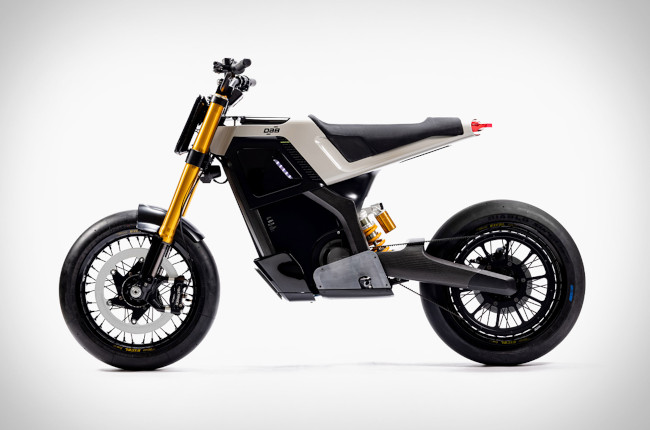 Upon closer inspection, we find super premium components such as Öhlins suspension front and rear. The swing arm, as well as parts of the chassis, are constructed out of carbon fiber, too. All those premium features, as well as the ultra clean styling DAB Motors has incorporated into the Concept-E are all sure to turn heads no matter where you go. We’re almost certain, however, that if and when this bike makes it to production, it’ll definitely carry quite the hefty price tag.

On the performance side of things, DAB Motors has equipped the Concept-E with a 10kW electric motor. It sips juice out of a 51.8V lithium-ion battery pack. DAB Motors claims that the Concept-E produces as much power as a standard 125cc gasoline motorbike. This makes it an extremely approachable two-wheeler for first time riders, and at the same time an extremely capable all-rounder for experienced riders thanks to its lightweight construction and premium Öhlins suspension components.