On October 14, 2020, the Yamaha e-Vino was officially launched in the land of the rising sun, Japan. This little e-scooter is one of team blue’s first entries in the segment. Known in the Philippines for their smash hits like the Yamaha NMAX 155, Aerox 155, and Mio i125, team blue seems to be paying attention to battery-operated in-city transport that little bit more. For most commutes in the city, a small, compact, and lightweight scooter is an indispensable tool to get around and people have developed a routine around gasoline-powered vehicles for some time now. So the question on our heads looms, will the most popular motorcycle brand in the country do good with an all-electric bike like the e-Vino?

The answer is that it could. Given the specs of the model, you can expect it to have a dry weight of just 68 kg. Add the battery and you bring that total to 74 kg. The 50V lithium-ion battery only nets an increase of just 6 kilograms. That metric alone makes it seem like a perfect bike to take around the city on your daily commutes. Expect that battery pack to last you about 29 kilometers before needing a charge, but Yamaha also supplies spare batteries that you can take with you in case you need to extend the range, though charging times are impressively quick at just about 3 hours as claimed by Yamaha Japan.

A rider could head to work, possibly plugin, complete their workday and go home. Perhaps the most daunting hurdle would be the range anxiety that you may get while on your commute, but that can be remedied by topping up the battery while at your workplace. Also present on the bike is an LCD display that has a low power indicator in the form of a turtle. Makes sense since e-vehicles tend to slow down once the battery voltage gets low. You also get two modes, which include ‘Standard’ and ‘Power’ mode. You also get a ‘Boost’ function that allows you a bit more oomph for 30 seconds to overcome inclines or your need for speed. Expect worse battery life and range if you do wring out this bike’s throttle, however. 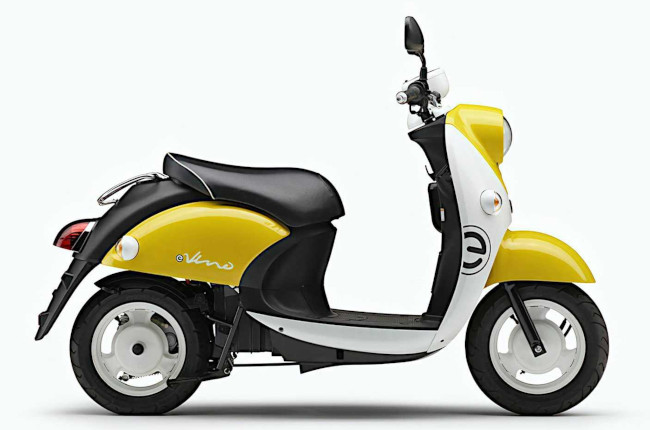 That depends on Yamaha Philippines if you can get it. So far, there is no word on the introduction of this model to the Philippine market, which is understandable given the landscape of e-bikes on the archipelago. This offering from team blue can do some good reducing emissions and making transport more accessible to people who want a simple and clean solution to their commuting needs. However, the price tag in Japan is a bit on the expensive side, with the model going for about 259,000 JPY or about P120,000, the bike is a bit on the expensive side. Seeing as e-bike tech is on the newer side, early adopters could expect to pay about the price of an NMAX 155 without ABS.

It could do well in the country, and the Yamaha brand backing it could instill a lot of confidence with the Filipino buyer. Though we don’t expect that Yamaha Philippines will bring it in at least for now. We cannot deny, however, that the scooter is a stylish vehicle that could be one of the most convenient forms of transport for a majority of people.