With major motorcycle shows, including EICMA and Intermot, postponed until 2021, motorcycle brands lost an avenue for unveiling new bikes to the market. For 2020, we’ve been seeing a lot of virtual shows, live streams, and web series that brings in a new era of motorcycle launches — or at least until EICMA returns and we’ve successfully averted the global pandemic. Triumph recently unveiled the prototype of its Trident with photos shot from the London Design Museum, with a video teaser to stir excitement.

Triumph was making every effort to think outside the box and bridge motorcycle and art, hence the project was made in the London Design Museum with the white Triumph Trident displayed like a marble sculpture of a Greek hero. As far back as March 2019, Triumph’s design division filed a trademark application for the “Trident” name, a name that they used in producing one of the most technically advanced high-performance roadsters back in the late 60s to the mid-70s. Its powerplant and platform were shared with BSA motorcycles back then. The trademark application easily sparked a rumor that the historical name would be making a comeback. Fast-forward to a year later, Triumph finally confirms the return of the Trident, but without its BSA twin. 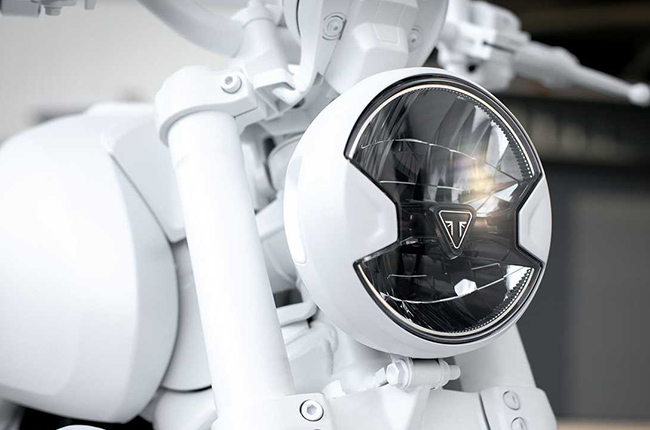 The bike now being displayed took a total of four years to develop. They tapped into the services of renowned Italian designer Rodolfo Frascoli, the man behind the Triumph Tiger and the Suzuki Katana’s designs. Frascoli’s work easily injected some Italian flair into the English marque’s triple roadster. The result is a design with an elegant combination of elements from the past, including its fuel tank with striated knee dents, and its single round headlight, paired with a modern streetfighter silhouette similar to that of the Speed Triple. While we have yet to receive its official performance specifications, and other details, Triumph is expected to pit this new roadster against other Japanese middleweights sharing the same power mill like the Honda CB650R. If Triumph plays their cards right, especially for its pricing, it could give also give them a serious run for their money. The Triumph Trident is expected to land in showrooms by early 2021. We’ll be sure to keep our eyes peeled and ears open once the production version emerges and its full list of specs gets officially released.