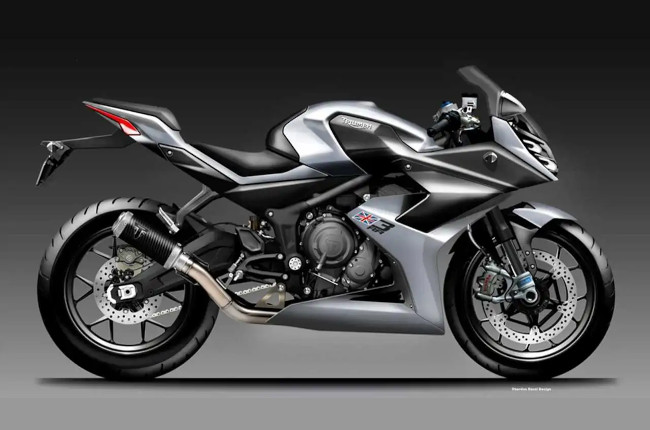 Triumph opened up the floodgates when it released its Trident 660. Many new and old riders scooped up the naked bike and began or continued their journey on two wheels. With the model being ever so inspiring and a joy to ride, what could possibly be next for the brand’s 660 platform?

Oberdan Bezzi is a digital artist who has a knack for conjuring up some great renders. His previous works include a Honda CBR656RR render that is a mini-Fireblade of sorts. This time around, he’s conjured up a new piece that he’s dubbed the Triumph Trident 660 RR. Bezzi followed the convention when it comes to naming Triumph motorcycles. There are levels when it comes to Triumph naming its bikes like R, RS, and finally, RR.

So what if Triumph expanded its Trident nameplate to cater to sportbike riders? Just slap on an RR at the end of the model name along with fairings and clip-ons, right? Seems simple enough so why hasn’t Triumph done it yet?

Bezzi has taken matters into his own hands using the Trident as the base for his little exercise. On top of that, he even took some cues from other bikes like the Tiger 660 which also happens to use the Trident’s engine. Of course, a redesign of the tank is to be expected as the Trident 660’s unit is a little too round to be on a sportbike.

The Daytona 675 was discontinued back in 2017, so there is a bit of a gap in Triumph’s lineup, or rather, “where is the middleweight sportbike?” Perhaps the Daytona could live on through a spiritual successor, and what better model to base it on than the Trident 660? As it stands, Triumph’s 660 platform punches out a decent 80 hp from its inline-triple engine, which is the middle of the road compared to Honda’s CBR650RR with about 90 horses and Yamaha’s brand-new R7 with a figure closer to 70 horses.

This whole image begs the question: “Can we expect a sportier Trident in the future? Will it be a fully-faired machine or something with neo-retro inclinations? We’re not sure, but either way, we’re hopeful that another middleweight sport or supersport bike will populate the Triumph lineup once again.