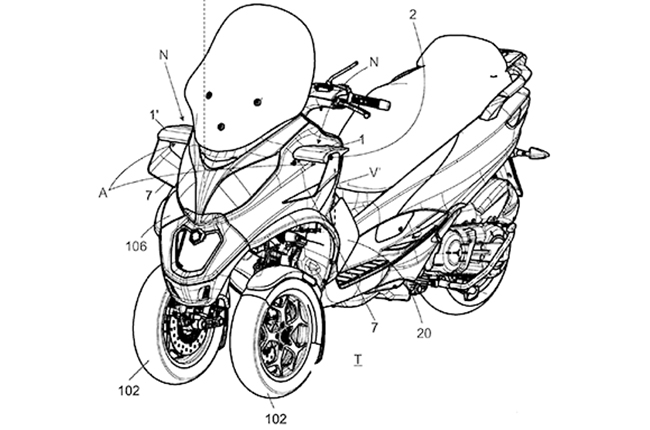 Winglets are all the rage nowadays, most especially for superbikes. We’ve seen fixed winglets attached to superbike fairings when Ducati released the new Panigale V4, and with Honda’s CBR1000RR Fireblade. They serve their purpose really well by keeping your bike glued on the pavement particularly during high-speeds. Recently, the Piaggio Group has joined the fray in the development of winglets as one of their patents filed in Italy in late 2018 was published by the World Intellectual Property Office. The patent just proves to show that Piaggio is continuing its work on its active aero systems with technology that appears to be the future of performance motorcycling. While the patent drawings show the active winglets being used on a three-wheeled scooter, the active aero system could be easily applied on any type of motorcycle, including superbikes. The patent’s sketches show a design for a C-shaped winglet mounted on the bike’s front fairing similar to that of the Aprilia RS-GP MotoGP bike’s winglets. However, unlike the RS-GP’s winglets, they are capable of being controlled electronically and move independently allowing itself to reposition to provide even better downforce in various situations. The onboard computer takes into account the lean angle and steering of the motorcycle and repositions the winglets accordingly. In effect, this allows for quicker rolling onto or out of corners showing noticeable effect at speeds higher than 50 km/h and above. They also move together to put more or less downforce on the front wheel (or wheels for a three-wheeler) which helps its braking and acceleration. It can be manually controlled by the rider or by an automated system to provide more downforce or lift. In any case, its function is to stabilize the motorcycle’s cornering or when it encounters bumpy pavement. Active aero systems are the wave of the future, and it seems like technology’s next leap after winglets. The Piaggio Group is pushing the development of active aero systems and is looking to apply it to its subsidiary, Aprilia for their next generation of RSV4 line of superbikes.