In 2019, Aprilia had a brilliant idea of reducing the size of a race bike’s radiator by improving the airflow with removable intakes into the radiator itself, allowing the motorcycle to save weight, and at the same time improve its aerodynamics. This idea was meant to be used for their MotoGP race bikes and nothing in the MotoGP’s rule book prohibited such modifications over a race bike. The key element was the exaggerated air ducts on either side of the front wheel. However, for decades, it has been illegal to have modifications around this area of the bike in MotoGP. However, Aprilia found a loophole. The MotoGP rules at that time allowed the modifications on the part obscured by the mudguard, forks, brake parts or removable air-intakes. A year later, just when Aprilia wanted to apply a new innovation to their MotoGP race bikes, the rule was amended and removed the exemption of removable air intakes from modification, which was the heart of Aprilia’s design. Instead, Aprilia filed the same patent for the same innovation that was originally intended for its MotoGP race bike. The way the new patent works, the traditional position of a bike’s radiator, which is between the engine and the front fork. However, the front wheel itself disrupts the airflow from directly reaching the radiator, which forces motorcycles to make larger radiators to access cleaner airflow. 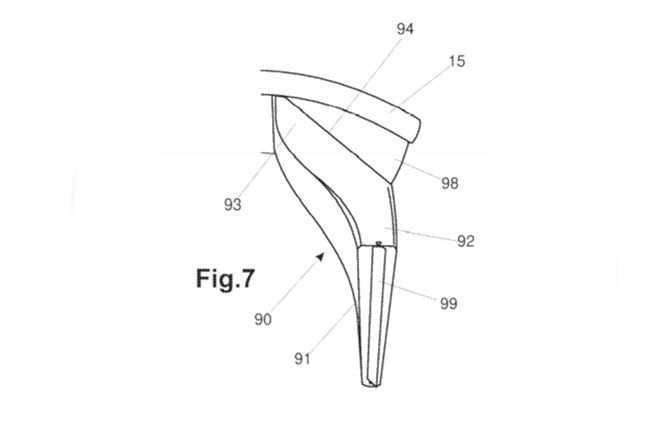 Aprilia’s patent seeks to stick air intake ducts in front of the radiator which flows up alongside the front wheel which would, in turn, suck in the undisturbed air and keep the engine as cool as possible. The rerouting of the airflow effectively bypassed the interference problems caused by the front wheel. An active component of the design in the form of a flap also activates and adjusts its position based on the compression of the front forks. This effect of this prevents the airflow from causing the parachute effect between the bike’s cowl and front fender which racers feel as they push for more speed.

While the sudden rule change from MotoGP prompted the filing of this patent, it is evident that Aprilia didn’t just want this idea to go to waste just because they were forced to conform to MotoGP rules. After all, Aprilia still produces the RSV4 RR, which is pretty much a street-legal production version of their race machines. This could hint on the new patent being applied to the RSV4 so they could still use the same technology, and maybe still race with it in less restrictive rule books like the World Superbike Championship (WSBK) races instead.