The Honda Goldwing is a very peculiar type of motorcycle. It’s considered as a luxury tourer equipped with a 1,833 cc engine mated to a seven-speed dual-clutch transmission (DCT) – yes, it’s automatic and it even comes with a reverse gear. It has its own Apple CarPlay infotainment system and front airbags. With features like that, you can consider it as a misplaced car on two wheels, or an oversized scooter with a car’s engine, depending on your perspective. However, one of the other things that makes the Goldwing unique is its front suspension system, and recently, Honda seems to be on a mission to use it for their other motorcycles or at least capitalize on the idea.

Because of the sheer size of the Goldwing’s engine and the way it’s positioned on the bike, Honda’s engineers had to rethink its suspension system to be able to position the engine closer to the front wheel. Instead, they used a double-wishbone suspension, a suspension system, you’d only normally see in cars. This made the front wheels travel straight up and down when it’s absorbing bumps rather than traveling along the angle of traditional telescopic forks. This way, the engine would no longer be bashing against the wheels if it encountered bumps. Recently, Honda’s patent applications have emerged online revealing the double-wishbone suspension system being used on motorcycles other than the Honda Goldwing. From the looks of the sketches, they seemed to allude to a Honda CB1100 and a Supercub. The first sketch shows the same inline-four engine present on the CB1100, but with a different suspension upfront. The CB1100 is considered a timeless classic looking bike, so fitting a double-wishbone suspension on the bike should give it a smoother ride. 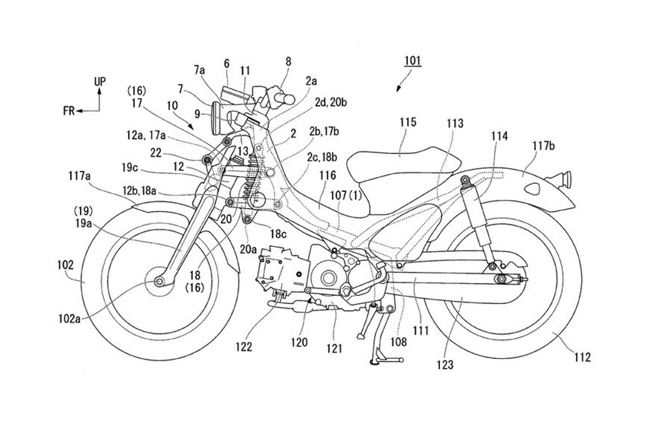 As to why Honda has been applying for these patents, perhaps they have been exploring the possibility in terms of design, and if it could work, they wanna make sure they’re ahead of the game. Whether these designs would actually reach its production stages, is still highly doubtful. However, the idea of it still seemed like a lot of fun.