After teasing Aprilia’s latest middleweight sportbike, the RS660, the Italian motorcycle manufacturer is finally set to unveil the new motorcycle this month. Yet, Tomasso Marcon, renowned MotoE racer and Aprilia’s test rider has posted an image on his social media showing what appears to be a prototype of the Aprilia RS660 Trofeo edition. The image was shared on his Instagram page together with a text that reads ‘COMING SOON’.

Aprilia releases a teaser video for its RS660. The bike appears to be a stripped-back and blacked-out version of the upcoming RS660 with its lights, mirrors, and number plate removed to make it more suitable for track use. Adorned with Aprilia branding, red accents on its seat, tank, fairings, and wheels, Marcon proudly posed with the bike. Yet, its mean-looking titanium exhaust system that runs from the headers down to the end can from SC exhaust surely guarantees a deep and lively sound on the race track.

With still no official announcement yet from the Noale factory about the official specifications of the RS660, at this point in time, we can merely speculate on its figures. It could be sporting a slightly modified engine, tuned more for track use. It should be able to churn out about 100 hp, although its power figures shouldn’t have much more power than its stock form. We can expect the RS660 Trofeo edition to be sporting a revised fork and rear shock internals, with more premium racing components, paired with more responsive brake pads. Of course, the obligatory racy-clip on handlebars would be positioned lower from the top yoke for a more aggressive stance. 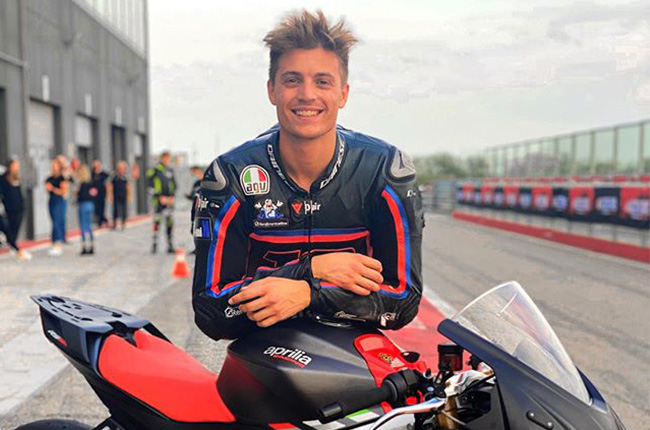 With Aprilia’s quest of discovering and developing new talent for the racetrack, talks have been going around Italy about the brand adding another one-make championship to the calendar, that would sit above the current RS 250 GP series. Rumors from the Italian press point to a Trofeo one-make series will be announced for 2021 by Aprilia. As we head towards the tail end of 2020, luckily, we wouldn’t have to wait too long until they release the full details of the new RS660 Trofeo edition. Indeed, the new bike will usher in an exciting race season for young and upcoming motorcycle racers.